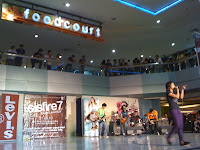 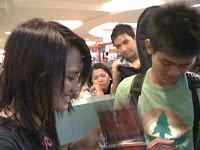 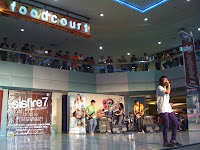 Due to this lingering demand that Gracenote, a budding band, is good and a must-see, I joined the kids to watch their mall show at SM City – North EDSA (yes, that far). Before that, I just visited a friend somewhere in Project 6 to make the effort more worthwhile.

So, MRT to North EDSA, side trip to my friend’s place then cab back to SM. I did not join the kids right away.

I visited this new thing in the area called Sky Garden. You see, MRT station is very much connected to Trinoma and people have to be diverted to visit SM City instead. This is the solution: a cool and refreshing hang-out place in the area that used to be an open parking space in front of the mall. The walkway alone is nice, complementing the restaurants in the vicinity. There’s also a concert venue (probably for 200-ish crowd) in the middle and it’s aptly called Sky Dome. It looks like a miniature version of Araneta Coliseum less the view (and smell) of Farmers Market. Toilets are clean and I saw some security guards from the EDSA overpass down to the al fresco strip.

Good sights require good sounds. Gracenote performing live (as part of UP Economics Society's Sisfire 7: Juan Vote! campaign) at the food court area of the mall was definitely the highlight of the Saturday metro trip. The band is five-man team top billed by its vocalist named Eunice Jorge (she had to act both as vocalist and drummer on their first song as their bandmate Jon Pichay was sick). Not a music critic here but I heard that they are the best band who can do Paramore covers. For instance, they did “Ignorance” from their three-song set. The only comment I can share is that I find the vocals versatile enough to crossover from punk pop to the musicality of, say, Sinosikat? or even Kyla. While writing this, I’m listening to their EP and now starting to get the fix.

More pics here.
Posted by Manuel Pangaruy, Jr. at 5:11 AM