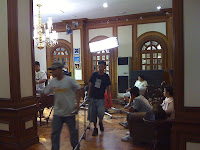 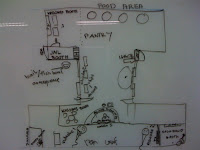 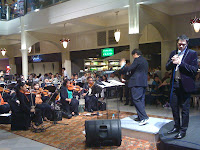 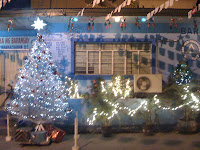 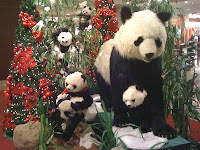 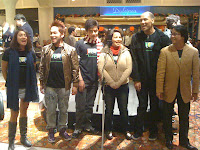 1. Shooting. I watched a film shoot for the nth time and this one’s for the indie movie “Fling” starring Rafael Rossel and Lara Morena. Taken at Makati City Hall which is home to many “locations”. My first encounter with “Fling” crew was also on the same building but on a different floor;

2. Floor Plan. This was taken to save a copy of the floor plan for the Christmas “Party”. Scribble was by Sadah;

3. Orchestra Music at the Mall. Another proof that the best things in life are indeed free. The concert was held at Power Plant Mall and the repertoire was mostly Broadway. Singing on this picture was Michael Williams, an alumnus of the original cast of “Miss Saigon”. Other performers include Jack Salud and the great Menchu Lauchengco-Yulo. By the way, the orchestra in spotlight was Filharmonika and the conductor was Gerard Salonga, no less;

4. Rent - Manila! This one’s a bonus, on top of the free orchestra music. I think it was one of the first guestings of the new cast of Rent – Manila and it was a treat to witness their two-song sampler. I can’t wait for February 12;

5. Mall Display. Taken also at Power Plant, specifically at the area near the National Bookstore branch;

6. Barangay Hall Christmas Tree. I came from not another film shoot (PLDT Cinemabuhay’s “Slowfade”, starring Diether Ocampo, Precious Lara Quigaman and Alchris Galura) when I passed by this Christmas tree display in front of a barangay hall near New Orleans St. in Cubao;
Posted by Manuel Pangaruy, Jr. at 10:31 AM