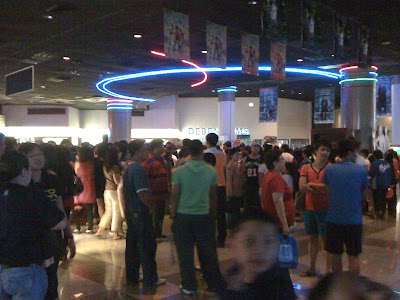 Christmas is gonna be over soon. That also goes for the dreaded MMFF (which is getting more and more alarming). Here’s wishing for everyone to survive the film festival and face the New Year with a clean slate. Furthermore, I understand if people skip it and the upheaval of nasty elitist comments in Facebook is pretty much tolerated. Take it as a breather for good indie films or a way to express our dear freedom to choose.

But it didn’t have to be this burdensome. We should at least be reminded of its earlier efforts to lobby for masterpieces like “Ganito Kami Noon, Paano Kayo Ngayon?”, “Bulaklak sa City Jail”, “Kisapmata”, “Himala”, “Jose Rizal” and “Tanging Yaman”. Oh well, just to make a statement, I’d rather not create a Movie Digest for it and just single out some “notable” scenes from this year’s line-up:

1. In the Dolphy film “Nobody, Nobody but Juan”, a couple of senior citizens get rowdy while watching “Wowowee”. One of them, a Caucasian, uttered something like “What’s with you, guys? You laugh and cry at the same time!” This neatly summarizes what the TV show (or Pinoy pop culture in general) is all about. Maybe there’s a silver lining there about us being so sadist-masochist;

2. Good to see Amay Bisaya in one of the so-so scenes in “Ang Darling Kong Aswang”. Same sentiment goes to ER Ejercito (now a town mayor) in “Ang Panday”;

3. There’s a scene in “Ang Darling Kong Aswang” wherein Cristine Reyes is seen licking Vic Sotto’s wounds. It was a tight shot (don’t ask me why) and it’s, well, kinky;

4. The tribute for the Pridyeder episode from the first “Shake, Rattle and Roll” in this year’s installment is definitely one of the best things that happened in MMFF 2009. In the Diablo episode with Maja Salvador, Janice de Belen made a cameo while enjoing the breeze from a refrigerator;

5. I can’t help but like the “Ukay-Ukay” episode in “Shake, Rattle and Roll 11” primarily with two scenes in mind. First is the chainsaw scene with Ruffa Gutierrez. That deserves at least a silent round of applause. The other important scene (or frame) is the one with Mogwai Bar in Cubao X on the background. Notice the marquee: “RIP Alexis and Nika”;

6. Sharon Cuneta is getting bigger and bigger. I respect the movie audience who laughed in the scene (from “Mano Po 6”) where she tries to fit in in the family van;

8. “I Love You, Goodbye”, I think, is the most sensible (read: less yucky-icky comments) entry. The closure scene on the beach (complete with a bonfire) with Angelica and Derek is definitely one of the best in the mainstream planet. And cleverly written. In the first part of the movie, when Angelica is going to be introduced for the first time in Gabby’s family, she is stopped to try a plate of sushi that she doesn’t recognize. In another scene, when Angelica leaves the coffeeshop to check for Derek, a customer is welcomed looking for a table for two;

9. Another scene on the beach (this time it’s daytime) with Angelica and Derek is suggesting foreplay. The couple is lying on the sand while the waves make its way to let Derek pump his girl. Very disturbing (at least for me). Is this R13 or something?;

10. USA or United Septic Association, headed by a Michelle Obama-look alike, in “Wapakman” is funny. What’s even funnier is that I watched its LFS in Glorietta last Sunday and we were only five in the 160-seater cinema. I guess people know Manny Pacquiao better. As Jose Javier Reyes puts it, “He’s a real hero, not a superhero.”; and

11. Last but not the least, kudos to the Turn Off Your Celfone ads at the start of the movie. There's one right before the screening of "Nobody, Nobody but Juan" (with Dolphy no less wittily reminding the people) and another in "Ang Panday" (I think). Here's hoping that the awareness would reach out a wider audience.
Posted by Manuel Pangaruy, Jr. at 10:12 PM