Movies from the Land Down Under 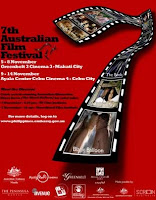 The 7th Australian Film Fest held at Greenbelt 3 was similar with the recently concluded Spanish Film Fest (tickets at P65 each, with reserved seating, etc.) except for the number of films to be shown and the limited period. Only six films were screened from November 5 to 8 (then from November 9 to 14 in Ayala Center in Cebu City). It’s a pretty amazing deal as opposed to having an overwhelming array of films, too overwhelming that you can’t really watch everything if you’re keeping an 8-to-5 job.

Out of six, I only watched three:

1. Jeff Balsmeyer’s “Danny Deckchair”. Imagine a live action equivalent of Pixar’s “Up” with a man sitting on a chair tied with a dozen balloons. The lead character Danny (the great Rhys Ifan, Hugh Grant’s housemate in “Notting Hill”), a loser, is on the verge of fall-out with his wife. He feels that he’s got nothing much to contribute in life. After the accident of being lifted from one city to a quiet town, his world made a turn. He meets a lonesome policewoman played by Miranda Otto and receives the recognition he deserves from the townspeople. It’s a rom-com and the take is Hollywood all over. Aside from the guilty pleasure that it’s enjoyable nevertheless, I appreciate the flying part that is both magical and stupid.

2. Robert Connoly’s “The Bank”. The festival flyer tags this film as a political thriller. It’s initially blueprinted as a controlling-guru-meets-an-amateur kind of film. Heading the cast is the radiant Anthony LaPaglia (who also stars in one of my favorite Aussie films “Lantana”) as the head of the bank who hires a boy wonder played by David Wenham (I think he’s the bad guy in “Australia”). The film may not be the edge of your seat type but it has its own set of chills and twists. Its statement on industry giants like the bank are evil is something that is worth noting about.

3. Elissa Down’s “The Black Balloon”. Sorry to peg this on Lasse Hallstrom’s “What’s Eating Gilbert Grape”, a family drama about coping on life’s challenges. It stars Toni Collette as the mother of two kids (one is autistic and the other, on his puberty). The POV of the film is mainly told through the eyes of the adolescent character (played by Rhys Wakefield) as he copes with the Herculean task of being a brother to an adult with autism and discovers young love along the way. The final product is not as low-pitched as “Gilbert Grape” but it is durable enough to tell a good story about family hardships and acceptance.
Posted by Manuel Pangaruy, Jr. at 7:07 PM