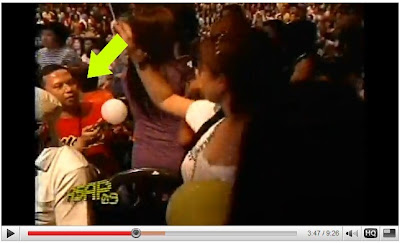 Last Saturday, when I was about to watch the “Sweeney Todd” staging in Greenbelt Onstage, I got an emergency text from a friend. She mentioned that eight slots to the musical variety show ASAP 09 for the next day were up for grabs. I started texting the usual suspects and got positive replies. After the play, the availability was trimmed down to five.

With Jen, Joey, Mel and Mel’s sis Pam, we met Joy at Starbucks inside the ELJ Building at 8:30am the following day and settled some under-the-table stuff. You see, tickets for the show are like gold. It’s either you book this early to catch it in 2011 or be a TFC subscriber. The other little known option is to be shortlisted as a member of a fan club from any of the mainstays. We took the liberty of being Sam Milby fans for a day. And Mel was not complaining, of course. At ten minutes before 9, we were already heading to the Audience Entrance along Mother Ignacia St.

There were roughly 30 people in the area that time. Minutes after we arrived, the guard asked the passes-holder to queue. Joy, by the way, divided us (five of us plus Patricia, Joy’s friend) into two, with three, given with passes, and the rest, as part of a “guest list”. Mel, Pam and Joey were the designated passes-holder so they were asked to get in first along with 15 other patrons. That was the first pass.

After a while, the remaining guest listers were then ushered to get in. I overheard that Sam already arrived, that’s why. Joy stayed put while Jen, Patricia and I got in. The guard joked that they’ll “enjoy” Joy for a few more minutes. Second pass near the entrance was another guard with a registry. We were asked to give our names and the fan club we represent.

While having a few more meters’ walk away from the second pass, we were halted again by another security personnel and were asked to wait. The event marshall mentioned that the queueing would be fixed accordingly to give way to those with tickets. That time, we’re allowed to visit the nearby cafeteria and to freshen up. At close to 10am, the marshall started giving a short talk on safety measures and started rolling out the sequence of the queue. Joey’s group was called first and we later on joined them after walking our way near the studio.

What followed was close to two hours of waiting under the Sunday morning heat. From the building opposite the studio, we saw some VIP-looking guests being given the chance to board in first. The TFC subscribers and the participants of the studio tour followed suit. In the middle of that, we also caught PBB Double Up’s ex-housemates Princess and Tom passing by. Patricia then got a call from Joy asking to meet her at the toilet near the studio. Don’t ask me what was that for. We just reconnected with them later in one of the best sections inside the studio (facing the stage, left most, roughly three or four rows away from the front).

ASAP 09 started at 11:45am and ended at 3pm. Energy was high all through out, complete with a little balloon in hand. We valued our seats a lot since most of the performers passed by our side (Joy must really know the place by heart). This gave the opportunity for Mel to take the long overdued picture with Sam. Twice. On personal note, I enjoyed the show, too. I can say that it was one of their better episodes even without the presence of the heavyweights. That's on top of being on national television for two seconds, of course.
Posted by Manuel Pangaruy, Jr. at 9:33 AM