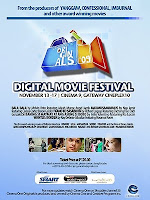 This year’s Cinema One Originals film festival at the Gateway Cineplex was not as smooth sailing as its previous counterparts.

First, the schedule. The organizer/programmer seemed to exclude a weekend spot for Ray Gibraltar’s “Wanted: Border”, the festival best picture, without the presence of his/her brain. This was a major drawback for those working on weekdays and very advantageous to bummers (no offense to them).

Next upset was the “absence” of the organizer. Let me elaborate. I went to the venue 30 minutes before the screening of Milo Tolentino’s “Si Baning, Si Maymay at ang Asong si Bobo” only to be overwhelmed by the kilometric queues in any direction you could think of. There’s an allotted one for the festival but the one in charge was on break (read: probably snacking or visiting the toilet). Really, really good timing. The solution was another no-brainer: ask the festivalgoers to join the special queue for “2012” and Pacquiao-Cotto fight. This prompted me to report to the organizer on his yellow muscle shirt standing in front of the theater entrance and got an assurance that he’ll fix it. The trick was he wasn’t trying to move at all. He even asked us to tell the people in the special queue to just proceed to the theater. Whoa!

Third blow was getting disappointed with a sold-out film screening of “Paano Ko Sasabihin” on its premiere. I had to kill roughly two hours to wait for my supposedly third film. Thanks to Erich Gonzales fans though I suspect that it has something to do with the crazy queueing scheme. I had no choice but to come back the next day (which I did). Lesson here is don’t open a film festival on a Friday, the 13th.

But then again, nothing (or no one) can stop me from watching the following films:

1. Milo Tolentino’s “Si Baning, Si Maymay at ang Asong si Bobo”. From the critical success of his two short films “Andong” and “Blogog”, Milo Tolentino tries his luck in a full-length feature. Still with kids as subject, the movie tells a story of a small seaside neigborhood seen in the eyes of youngsters Baning, her bestfriend Maymay and her brother Paeng. Bobo happens to be their drunkard neighbor’s pet dog. The film runs for roughly two hours without having much event or complication happening except for the message on every kid’s right to have a proper education. Maybe that’s the whole gist, that a kid’s world is undeniably simple and basic.

2. Melvin Brito’s “Bala-Bala”. This one started as a tale of deception when a young agriculturist started to discover that he could cure sick people in a far-flung barrio somewhere in Batangas. Little did he know that the healing power came from a Santino-like deaf kid who kept tagging along. Upon discovery, the miracle boy suddenly bursts into a blinding light. He, after all, is something like a firefly creature. I understand that the filmmaker tries to impart a very New Age wisdom regarding our composition as a human being. It asks the audience through one obvious scene if we already know what we are made of. And I appreciate thoughts like that. It so happened that the message is not properly coursed through. Acting and production design are decent enough.

3. Nap Jamir II’s “Maximus & Minimus”. As a sex comedy that is rarely seen in contemporary Philippine cinema, the film introduces two interesting characters. Maximus is a fat girl who is very much sexually active. Her insecurities only arise when a man she consistently meets shouts “Barney” in the middle of a heated sexual confrontation. Minimus, on the other hand, is a nice looking and intelligent lad who happens not to be gifted down there. His search for life is mostly preoccupied with his search for a perfect penis enlarger. The paths of these two star-crossed individuals intertwine as they ontinue their own journey to unravel. I like the film being glossy and all. My only comment goes out to the Minimus character played by Mikel Campos (this year’s Best Actor). I don’t understand his sexuality at first, thanks to a poorly devised sequence involving the first time meet-up and another scene with Soliman Cruz.

4. Ray Gibraltar’s “Wanted: Border”. This year’s best picture went to this sophomore film from the same creator of “When Timawa Meets Delgado” (a mockumentary on Philippines’ plight of the BS Nursing course). The unconventional narrative shares a similar premise with Sweeney Todd’s Mrs. Lovett’s meat pies. This time around, it’s not about revenge but just a random take of violence. Rosanna Roces remarkably plays a disturbed carinderia owner/cook who invests on the meat of her poor victims. The big stink however originated from a very bleak past, from childhood to years spent as executioner to suspected activists. The film is dedicated to Alexis Tioseco and I’m pretty sure that wherever he is now, he is very proud of this film. On personal note, I was surprised that Ray Gibraltar can accomplish a film as well made and focused as this one. I can say that Cinema One Originals survives 2009 with the help of this important work of art (and please disregard the title of this blog). A must-watch.

5. Richard Legaspi’s “Paano Ko Sasabihin”. I did not complain when I heard that this entry received the Audience Choice award. It stars popular teen stars, the beautiful Erich Gonzales and Enchong Dee, as two souls trapped in a dilemma of mistaken identity (both are pretending to be deaf). The plot may be too thin for an indie film festival but I appreciate the honest direction. Here’s hoping to see a more challenging material from the director in the future.
Posted by Manuel Pangaruy, Jr. at 8:35 AM