The Road, the Lighthouse and a Cape Called Cabo Polonio 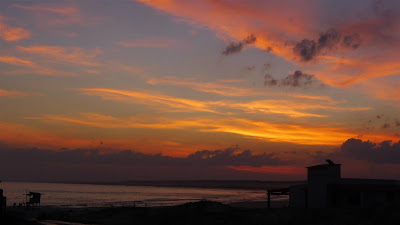 Last weekend was supposed to be a trip to Punta del Este. At the height of the planning with seven of us here, six Pinoys and a Mexican, we received an invite from a colleague to visit their houses in Cabo Polonio. With the aid of a few blogs in English, our impression was that it’s like a ghost town with a nice beach, no electricity and a no serviceable supply of water. A colleague articulated it by saying “like going back to boy scout days”. We said no at first until we ended up just moving the Punta del Este trip to another weekend this month. Some backed out but most maintained their sense of adventure.

Our call time was at 8am. We managed to come up with a small rental car on the last minute and that saved a lot of effort. Optionally, we can just take a bus from Tres Cruces and endure the 5-hour trip (which I don’t mind since I’m used to it on my regular trips to Quezon Province). The other car, a 4x4, is courtesy of the one who invited us. Each car has five passengers. The difference is that one went all the way to the place while the other stopped where the busses stop, parked the car there and took a bumpy truck ride which is undoubtedly more fun and more definitive of Cabo Polonio. 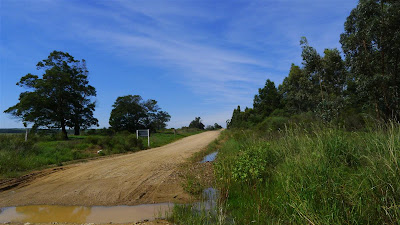 The dirt road on our way to the scenic route 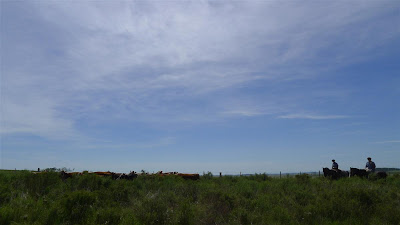 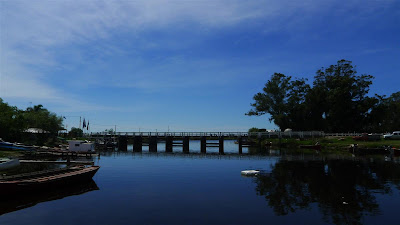 I was assigned to the 4x4. Ours was more or a scenic route as we went straight past a rotunda and took a dirt road (probably scary at night) that leads back to the highway if we turned right instead. There I finally saw a real gaucho (cowboy) herding a handful of cows. No complaint whatsoever from my end since our “driver” made it a point to act as tour guide when necessary. We had two stops along the way (on top of the small ones for picture taking). One’s at the supermarket along Ruta 9 to buy vegetables and another at a fishing village in Valizas for some shrimps. The latter is just around two kilometers past the drop-off point for Cabo Polonio so we had to maneuver back somewhere. 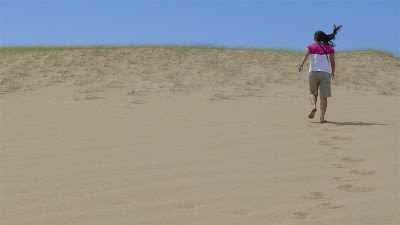 Sand dunes on the way to Cabo Polonio

The gateway to the beach area is also the entrance to the national park complete with a checkpoint and park rangers. It’s protected now by the government as opposed to, say, decades ago, we were informed. This means that not all roads or sand dunes can be accessed by the truck. Private cars, on the other hand, have its own route, passing through a Twilight-esque fences of pine trees, giving a hypnotic vibe as the sunrays try to penetrate in the narrow gaps. Sand dunes became visible when we came close to the town. It was a nice experience that we were given a chance to stop in one of those, run through it and have more pictures. After an estimated travel time of four hours, we finally reached Cabo Polonio. 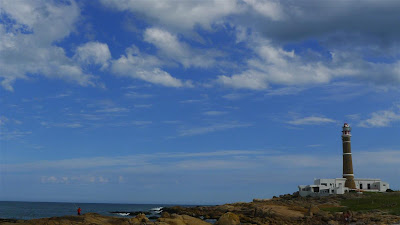 From afar, the lighthouse can already be seen. There are some electric cable posts along the way and this provides power solely to the el faro. Scattered small houses inhabit the area, usually with a maximum of two small rooms and a porch to overlook the Atlantic Ocean. They are not as uniform as those in Santorini but each has a character to tell. Accordingly, the place has a population of just 89 and the rest are tourists. Before we headed for lunch at La Perla restaurant in the “town proper”, we were given some instructions on how to manually flush the toilet and other Survivor kind of stuff.

The “centro”, as another colleague puts it, their “5th Avenue”, is lined up of restaurants, souvenir shops, some posadas (hostels/inns) and the spot where the trucks pick up passengers. After having our late lunch (we had calamares romana, grilled fish, seaweed balls and some Heinekens, all good), we took the rear entrance of the restaurant facing the other side of the cape and headed to the lighthouse. Some went directly to the beach. Unfortunately, the lighthouse wasn’t open for a visit as there’s a lack of staff that time. We just enjoyed the view from there, including a prohibited rocky area with four or five seals having a ball with their sun bath. It’s one of my rare chances to see this kind of amphibians on their natural habitat. 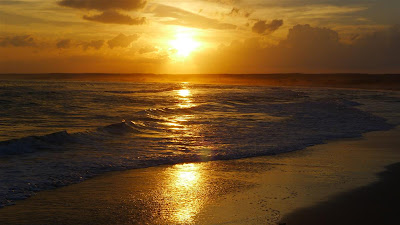 From roughly 4pm until sunset at 8pm (videos of the cape during sunset here, here, here and here), we were on the beach. I haven’t swum in a sea for more than three years now. I actually can’t remember the last time. The Atlantic is cold but I managed to conquer it along with the rest of the Manila Mafia. When we headed back to the house where we stalled our bags to freshen up, we Pinoys were sent to another house which is just some meters away (the third house is occupied by the owner’s son and two other friends). It was starting to get dark. To take a bath, for instance, we had to light some candles. The whole she-bang is old school. For the shower alone, we had to get water from the pump inside the house. In the Philippines, this set-up is very unusual as we always install this kind of pump in the backyard. Using a pail, we need to pour the water to another pail that is hanging inside the bathroom. It has a string that you need to pull for the shower. Clever!

We readied ourselves (the Manila Mafia) at around 10pm and with the aid of a flashlight, off we went to the first house where a parrilla was ongoing. Using a candle in a makeshift lamp (a 5-liter Salus container with some sand on it, very common in the area), all of us from three different houses sat down and shared wine, beer and some finger food in the porch area. Dinner was finally served at close to 1am. We missed the initially planned bar hopping but it was fun nonetheless. It was serene when we went back to our house (which is called “Lucifer 1979”, by the way). It was a full moon the night before and it was still generously evident on that Saturday evening. Some houses are well lit with candles while the rest, the majority of the community, was embracing darkness. From afar, el faro was standing tall and proud as always with its light rotating very calmly. Now I understand why the Oscar winning Uruguayan singer Jorge Drexler (“Al Otro Lado del Rio” for “Motorcycle Diaries”, 2005) got inspired by the place for his song “12 Segundos de Oscuridad”. 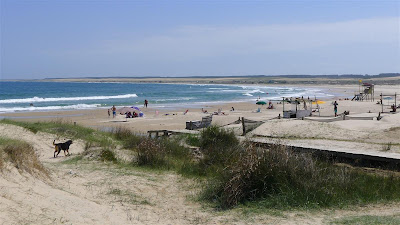 The beach area of Cabo Polonio

Sunday was more of “anything goes”. We planned to wake up at 7:30am but something messed up somewhere because of the DST change. We had a morning stroll along the beach, took a thousand more pictures (there's a video here) and had our breakfast of biscochos and medialunas from the “supermarket”. For lunch, we just finished some leftovers from the night before. After a short trip to the souvenir shops, half of the group was already making their way back to the park entrance through the truck. Guess I have to visit Cabo Polonio again just to try out that thrilling ride. The 4x4 group, the other half where I belong, finally left the cape at 5pm. We had a quick stop at La Pedrera (a quick video here) and headed back to Montevideo while the sun was setting down in between the trees. 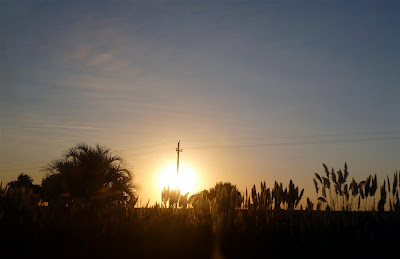 Another sunset poetry on our way back to Montevideo

Back to my comfy bed in the apartment on the same evening, I was visited by some thoughts. Definitely there’s more to Uruguay than the three popular ones namely Montevideo, Colonia and Punta del Este. Cabo Polonio is a real beauty, a stealing one. The beach alone boasts of a stretch of fine sand and blue water from the Atlantic Ocean. It’s best for anything that you can do with just the beach. No banana boat ride. No snorkeling adventure. Surfing board, yes, and some ATV’s but those are either brought by the visitors or used by the residents. Not the usual for-rent that you can see in most commercial and highly overrated beach resorts. This brings me to what I love the most about Cabo Polonio. It made me appreciate the beach as nature and not as anything industrially fake. I hope the inhabitants would keep its magic as it is. No electricity, no big pipes for the water and most importantly, no noise at night. The sky is even clearer on that side of the planet. I haven’t seen such a gathering of stars shining that bright and joyously like a sparrow while the moon, luminous as ever, looking back at us from a distance. The enchanting sound of the crickets, as always, is a fitting companion for a good night sleep.

This house belonged to my moms best friend. :) It is now owned by the family who still rent it out, i had the pleasure of staying here many times. Lovely.