Cataratas do Iguaçu – Day Zero: Trip to a Natural Wonder 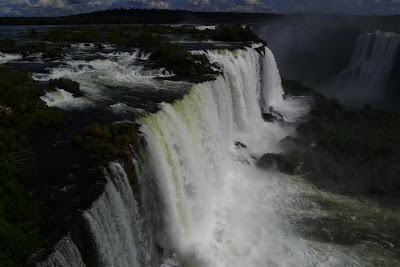 Compared to our other Mercosur adventures (Buenos Aires in Argentina and Rio de Janeiro in Brazil), this one went the smoothest. First, since it is Brazil, we don’t need to worry about any visa as we’re all Philippine passport holders (the Argentina side was out of the question because of this). It helped, too, that there was a long weekend here in Uruguay last February 20 and 21 (carnaval holidays) so we grabbed the chance to plan the vacation ahead. To top it all, we were not required to work overtime during the said dates so the trip was as stress-free as it could get.

Pluna is the only airline that flies directly from Montevideo (MVD) to Foz do Iguaçu (IGU). Though it was not as expensive as our trip to Peru, we booked through the ever reliable Expedia in which we saved up around $100. The only drawback in flying through Pluna is that they have limited flights from Saturday to Tuesday but it wasn’t a problem given the schedule that we were eyeing (February 19 – 21).

Next thing we knew, the four of us (with Mike, Redy and Jacq) were already choosing a hostel for a two-night stay from the list below (including their rating then):

We ended up playing safe and picked Iguassu Guest House which is easier to locate by public transport than a cab (and we learned this the hard way on our very first day). After waiting for about 15 minutes or so for the bus at the airport (the stop is still within the airport area and only a few steps away from the exit if you turn left), we got tired and just hailed the next taxi. That was already past 8pm. The driver charged us BRL 45 and said that it’s a fixed price for an airport cab. We didn’t contest that but he got a hard time finding the hostel even if we already aided him with a map from a smart phone.

Optionally, by bus, it’s cheaper (only BRL 2.65 each) and simpler. Just alight at the last stop which is the Terminal de Transporte Urbano (TTU) and exit at the back of the station (the façade has “TTU” label on a maroon arc-like wall). From the back exit, the zoo can already be seen from there. Just walk along that street heading to the left and turn right at the corner (Gaucho Churrascaria is seen from the opposite corner). After turning right, turn left to the next corner which is the end of Rua Naipi and stop at 1019.

My first impression of the hostel is that it is very secure. There’s an elevated electrical fence surrounding it and you can’t get through the metal gate without buzzing first the reception located at the lower part of the house. I guess this kind of security is needed for a big and relatively more developed town (compared to, say, Cusco in Peru) though we didn’t feel any threat along the streets even at night. There we met the hostel staff named Bianca who’s very fluent in English and very welcoming. She said that there was an error in the reservation online so we’re getting the room that is good for eight just for the four of us (we did not complain). Then we settled the other stuff like the Wi-Fi card which is BRL 5 for 24 hours and BRL 7 for three days. They also have lockers for free so long as you bring your own lock, a usual practice in most hostels.

We capped the night with our first (well, for this year) taste of churrascaria (grilled meat) at Gaucho. It was a bit busy and mostly packed by locals who just came probably from a Sunday mass. Since we don’t know a single Portuguese, we got by through observation and a little hand language. It’s a buffet where we got side dishes (and dessert) from a separate table while the waiters were roaming around the area with their own stick of meat, a fork and a knife. Just get their attention and a hearty, freshly sliced meat will be served right in front of your table (just watch out for the knife). When we left the restaurant, a long queue was already forming at the entrance.

That pretty much concludes our first day at Foz do Iguaçu (more pictures here), the gateway to one of the new seven natural wonders of the world.
Posted by Manuel Pangaruy, Jr. at 4:55 PM