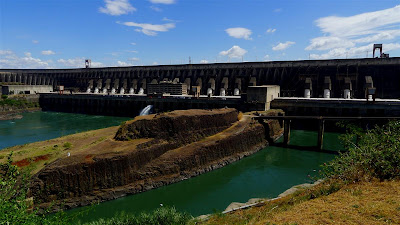 We were supposed to avail of a design-your-own half-day tour but the agent (Iguassu Falls Tour) said they have zero availability for the 21st of February (thanks to the carnaval season). It is supposed to include Marco das Tres Fronteiras, the Itaipu Dam and some churches in the city for $ 132 or around BRL 225. No choice but to devise a game plan for that day to visit those spots by public transport but the hostel staff is nice enough and advised us to just get a cab instead. She said that the kilometer walk in our first stop could be a little unsafe for tourists like us (with the camera on and all). We heeded that and asked if she knows any reliable taxi driver. In five minutes, the cab was already waiting outside the hostel. The driver even offered to drop us to Itaipu and that he’s willing to wait for us in Marco das Tres Fronteiras, all for BRL 80. We said yes.

From left to right: The Brazilian marker, the Argentina side and the Paraguay side

Our first stop, Marco das Tres Fronteiras, is the point where three South American countries meet (Argentina, Brazil and Paraguay). Each country has its own marker representing their flag colors. It is similar to Drienlandenpunt in the Netherlands where it borders with Germany and Belgium. The difference is that the place is divided by intersecting rivers (Paraná and Iguaçu). Technically, you’re not really in three countries at the same time. In our case, we were still in Brazil but we can see the other two markers from there just across the river. Nevertheless, the mini park is worth a visit for a nice and quiet stroll. Aside from the phallic structure, there’s also a viewdeck, some benches, a souvenir shop/snack bar, toilet and nothing else. We also saw where the public bus stops and my estimate is that it will take 15 to 20 minutes if we go on foot. There were three young girls walking when we passed by and the area looks safe to me.

Itaipu Dam, on the other hand, is in the northern part of the city. So, from the marker, we had to pass by the city center again. I believe there’s only one road leading to the place and it would still be convenient if reached by bus (the stop is just outside the reception building).

There was a long queue when we reached the ticket area. That was around 10:30am already. Circuito Especial (BRL 51.10) tour was sold out so we had no choice but to take the Visita Panoramica (BRL 20.10) instead. The former requires two hours at the very least and will go inside the dam’s control office while the latter is a breezy tour by bus from the outside. Both are guided and both started with a short film showing about the dam. One particular detail that I won’t forget, aside from their facility for white water rafting training, is the waterway they created for the fish that serves as a shortcut. I heard that most dams damage the natural habitat of marine animals as the water is contained and only released at a certain timetable. Though there’s no flowing water as seen in the postcards, I still enjoyed the tour. The bus stops from time to time for picture taking and that’s good enough for me.

From left to right: Lunch with beer, oriental shrimp and lemon pie

We were done with the day’s itinerary at 1pm past. After getting some refreshments at the snack bar near the ticket area, we headed back to TTU. We caught a connecting bus trip from there going to Cataratas JL Shopping where we had our late lunch. I got an oriental flavored shrimp dish, a Chopp Brahma beer and a lemon pie (which, for me, is the best that I tried on this side of the planet), all from Vivenda do Camarão at the food court section of the mall. We stopped briefly at the Nobel book store where I got a book about the Cataratas and the nearby attractions and off we went back to the hostel to fetch our things from the locker.

Clocked at 5pm-ish, and with my left foot aching, we were walking heavily back to TTU. It’s bye-bye time and what an immersive way to end with a public bus trip to the airport. There’s nothing much in IGU and it isn’t that big as expected. After we checked in, we were asked to wait until 7pm before proceeding to the gate. There was a food court upstairs and people there were watching the planes to take off. Some flat screen televisions are installed and there we watched the riot that was happening live in Sao Paulo during the carnaval. Apparently, a guy went to the area where the judges are and snatched the score sheets, ripped it and ran. It started to rain real hard the moment we came close to the gate. At 8:50pm, we were already boarding. Still my left foot was aching but still managed to sprint to outwit the rain. The Cataratas adventure never ends.