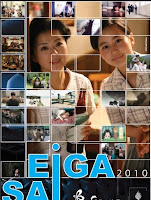 In terms of game plan, nothing has changed in this year’s Eiga Sai. It remains free and, for the nth time, held at The Shang (from July 1 to 11 then it moves to other venues like Davao and Cebu and back to UP Film Institute in August). Same old queuing system as well. Ticket distribution is still an hour before the screening, sorry to those who are rooting for films with more than two hours of running time (at least two casualties).

1. Ogigami Naoko’s “Megane” (Glasses). I felt relieved that this is the first entry that I’ve seen for this year. It somehow sets the mood for the rest of the films. A capsule review may not be justifiable for this opus but let me try. It’s about Taeko, a professor, a busy one, checks in at Hamada Hotel in a remote island to probably get rid of the hustle and bustle of the city. There she stays in a strange place which serves sumptuous food, encourages “twilighting” (literally, staring at sunsets), has this odd exercise called “merci taiso” conceptualized by an old woman named Sakura and has afternoon bonding time spent with shaved ice. Though simplistic at face value, the film has a lot to say. If I’m not mistaken, education in Japan is a big deal and the toll shows in Taeko’s search for an ultimate relaxation that she is forced to complete during her stay. Sakura, or cherry, symbolizes a season that only comes very occasionally and experiencing it is something worth looking forward to. For busy people, this is a film to see to reflect on life’s blessings and exhale on it.

2. Tsutsumi Yukihiko’ “Hôtai Club” (The Bandage Club). I can say that it’s the ultimate emo film that I’ve seen whether from Hollywood or Asian cinema. It’s about a group of teenagers who revolutionizes a healing approach on pain: tying a bandage on the place that reminds suffering and trauma. Rendered in a very mainstream fashion and with a cast of some popular actors, the members attempt to help other people face the music and eventually hurdle their personal mountains. Though very reachable from start to finish, this tearjerker also harbors a statement on the juvenile angst of the Japanese.

3. Yamamura Koji’s “Kafka Inaka Isha” (Franz Kafka’s “A Country Doctor”). This is a short animation adaptation, an Academy Award nominee, of a 1919 novel by Franz Kafka, about a doctor during the snowy season who is summoned to help heal a sick child. The most substantial part perhaps in the film is in the way the plot is transformed into a 21-minute storytelling. Very engaging, the distorted visuals suggest how twisted a man can get in juggling between life and death.

4. Suo Masayaki’s “Soredemo Boku Wa Yattenai” (I Just Didn’t Do It). This film (directed by the same guy who did “Shall We Dance?” which was remade by Hollywood starring Richard Gere and Jennifer Lopez) runs for two hours and 23 minutes but the journey of a young man named Kaneko Teppei who gets entangled in a groping case inside the train is worth the time. It shows one side of the Japanese judicial system, their prison life, their treatment to both the victim and the defendant, and the whole court hearing process. Focused mostly on court scenes, the breathing characters are a delight to see. The filmmaker makes it a point to treat the audience as one of the bystanders inside the court. I’m not sure how appealing it is to Japanese moviegoers but this one had me glued from start to finish, rooting for the main character to survive the agonizing quest for truth and fair justice system. At some point, I was reminded about the parallelism between their system and ours (including the storytelling or filmmaking part), specifically on highlighting oppression.

5. Matsuoka Joji’s “Tokyo Tawaa ~ Okan To Boku To, Tokidoki, Oton” (Tokyo Tower: Mom and Me, and Sometimes Dad). I understand why it garnered a Japanese Academy Award for best film. This memoir tells about the journey of an artist named Nakagawa Masaya and his ailing mother while struggling against all odds mirroring the construction of the iconic Tokyo tower. Told in a collage of present and the yesteryears, the mother and son tandem faces the challenge of the times from a small mining town in Japan to a modern city like Tokyo in search of life’s purpose and wholeness. Made with lavish production design, costume and make-up to recreate the timelines of the past, the film also boasts of restrained acting performances from Odagiri Jo, the lead actor, and the two actresses who played his mom, Kiki Kirin and Uchida Yayako.
Posted by Manuel Pangaruy, Jr. at 7:26 PM