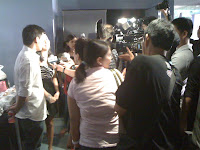 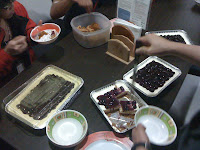 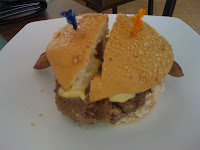 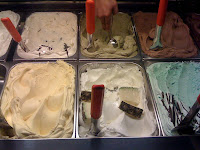 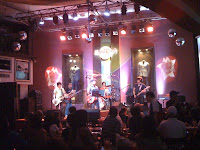 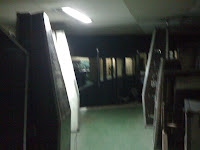 1. Dominic and Maxene. Roco and Magalona, respectively. Taken during the premiere of the film “Pendong”, still at SM Mall of Asia;

2. Home-baked Cheesecake. It was officemate Migs’ birthday and look what we had! In another container is a bunch of fortune cookies, still home-cooked. Yummy!;

4. Hydraulic Pit. This one’s at CCP, particularly for Tanghalang Nicanor Abelardo. A bit scary from this angle and the coffin-like boxes are not helping. I think they are maintaining the pit in time for “Cats” this month;

5. Familiar Place. One of the hip places that I managed to explore when I was just starting a career is the Hard Rock Café. Not that I was earning a lot then but maybe it was a challenge for me to save up for this expensive hang-out place in Makati. I remember liking their pig sandwich which is pork patty and some vinegar (if I remember it right). I was there a week ago for Kenyo’s gig;

6. Gelatone. Tried this gelato place in Greenbelt 3 for P100 per scoop. Similar to other gelato stores, they make it a point that you try some of the flavors first before making a hard decision. I had pistachio and it was so good that I found a place near the little fountain and had me nostalgic about Italy;
Posted by Manuel Pangaruy, Jr. at 9:20 PM