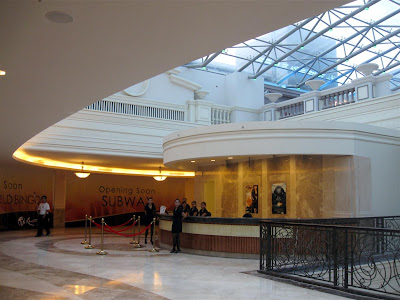 Here are the reasons why you should visit the new Newport Cinemas at Resorts World – Manila:

1. It’s new. It’s like getting into a newly purchased car where you can still smell the fresh leather and all;

2. If I’m not mistaken, it’s the first cinema in the Philippines that is housed inside a Vegas-like casino-hotel. Well, we don’t have much casino-hotels in the country so the idea is very welcoming;

3. Seats are very comfy, walls are stylish enough to give you that homey feel and the screen size is just right (not too big as those in SM Mall of Asia and not too small like those in Podium). The entrance is at the back and you don’t need to pass through the front area near the screen to get seated. I remember the small cinemas in Kentucky (or in the US in general) being similar to the interior;

4. It’s going to introduce four cinemas soon. Cinema 1 is called Ultra Cinema which has 80 reclining seats and has an enclosed cubicle set-up (for utmost privacy so to speak), complete with a personal butler and unlimited popcorn. All you have to do, according to the spokesperson, is press the button;

5. Cinemas 2 (the one where we viewed Phillip Noyce’s “Salt” as part of the launch last Wednesday) and 4 are regular cinemas, therefore cheaper at approximately 200 bucks. Cinema 3 is 3D cinema and is currently showing M. Night Shyamalan’s “The Last Airbender”. Only Cinemas 2 and 3 are open as of this moment;

6. The cinema area is near Republiq, which is one of the hottest hang-out places in the metro. Of course there’s the casino and your favorite café;

7. Though Resorts World is packaged as a hotel-casino, it still has “masa” shops like Bench and even Mc Donalds. I am not sure as of presstime if food bought outside the cinema area will be allowed (similar to Shangri-la Cineplex policy);

8. Since it’s new, expect less people in the queue. So if there’s an upcoming blockbuster movie, you know the drill. My suspicion is that celebrities who are avoiding the crowd will opt to “private” cinemas like Newport;