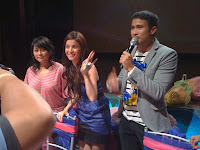 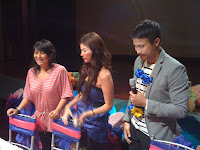 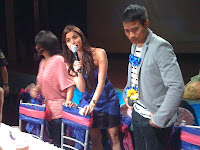 First things first, there’s no such word as “presscon”. I tried separating “press” and “con” but it doesn’t feel right. And since I can’t get rid of that irritating red line, I right click the word and choose “Add to Dictionary”. Now I’m relieved.

Last Wednesday, I finally granted Mel Fule’s second (and last) wish (assuming that I acknowledge the secondness of it since the first and probably the major one was already accomplished last December). First one was to meet Sam Milby. The second being another meeting with Mr. Milby and this time around, Mel is going to tell Sam that she was the birthday celebrant with whom the four missed calls were made.

As part of a far-fetched plan to invite Sam on Mel’s despedida (yes, Mel, that’s true), I started contacting the usual suspects (Miss Joyski and Good Samaritan). Miss Joyski shared about possible access to the presscon (my very first) for the upcoming Star Cinema film “Babe, I Love You” starring Sam and Anne Curtis. I invited Mel and off we braved EDSA during rush hours.

Meeting was at 6:30pm in front of Gram’s (inside the ABS-CBN compound) but our contact named Tita Long (female, wearing glasses and has a mole) was not around yet. Close to 7pm, she came along with Miss Joyski (they were not together) and another lady named Sisa (who Mel and I saw standing in the area the time we arrived). Then off we got in the audience entrance and straight to Dolphy Theater, passing a set of dining tables for the press. “Fans” were instructed to stay at the balcony area so we obeyed.

The presscon proper started at close to 8pm. Sam, Anne and first-time director Mae Cruz were on the presidential table. Manay Ethel (Ramos) moderated the Q&A along with a female DJ from 101.9 (I forgot her name but she seems popular among the fans). Nene, Sam’s PA and Jon-jon, Sam’s driver, from time to time, would visit the balcony to the delight of everybody. Questions vary from sensible (“Your impression to each other seems very sensual.”) to just plain stupid (“Itutuloy n’yo ba ang nasimulan n’yong relasyon?”). Anne was very candid and very un-showbiz on answering the questions. The only time she answered very direct was when asked sensibly about the research done on the film. Sam was sometimes lost, thanks to his improving familiarity with Filipino/Tagalog. Jaejay and Linel surprised us by showing up in the middle of the questioning.

Anyway, the real deal happened after the presscon.

All four of us (Mel, Jaejay, Linel and I) plus Miss Joyski and Sisa were waiting at the theater exit. We were informed that Sam and Anne were still being “ambushed” for more interviews inside the theater. Nene was also there plus Sam’s stylist. I rehearsed Mel from time to time about her possible script in which she gladly obliged. Sisa even prepared something for Mel to ask Sam for an autograph (it’s a shirtless Sam on paper).

After roughly 20 minutes of waiting, Sam came rushing from the corridor entrance. I heard that there was a shoot for “Now showing!” spiel somewhere. When Sam reached us and thanked us for coming, I looked at Mel and saw her, err, freezing. Sam was already in the middle of the corridor and still no sound from Mel. I think it was Miss Joyski who was conversing with Sam. When he was about to exit, I remember my voice shouting “Kami ‘yung friend ni Good Samaritan!”. I think Mel seconded that and made Sam slow down a bit. He was still clueless. Then Mel shouted “Tumawag ka n’ung birthday NIYA!” and made Sam look more confused (sorry Mel but I don’t know ‘til now where that came from, hahaha). Epiphany came just in time. Sam in a spanking tone, “I called you on your desk like four times!” on which Mel said sorry. Sam followed up, “Just visit me again.” and vanished.