My early memories with takoyaki were probably during college days when I used to visit Harrison Plaza to do my groceries. There’s a stall there near the National Book Store branch that sells those Japanese dumplings and I don’t remember liking them. It must be the veggies in it or probably the thought that onions are hiding somewhere.

Just recently, while waiting for a DUP play to start, I came across this little takoyaki stand called Sakoni. They are selling three pieces for P25 which I found to be relatively cheap. I tried my first serving, enjoyed it and ordered for two more servings. I don’t know what happened there but it got me started to search for the best takoyaki in town.

In case you’re still lost what a takoyaki is, Wikipedia will be of help.

The list below is just partial. Expect another round of takoyaki adventure real soon. For instance, Hana in Little Tokyo and Karate Kid are already noted. As of this writing, these are the top of my list: 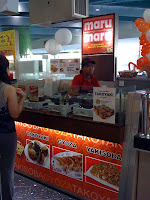 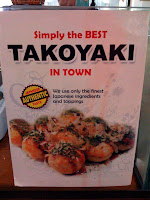 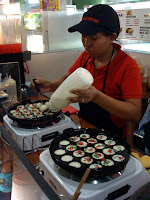 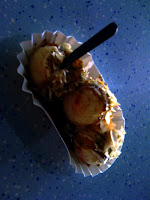 1. Maru-Maru – Found in Glorietta’s food court called Food Choices, near Savory area and in the same line where you can find Fruit Magic. I have to admit that I was introduced with it through a tarpaulin claiming that they have the most authentic Japanese ingredients and they seem to tell the truth. Three pieces at P36, a bit pricier than Sakoni (P63 and P103 for six and nice pieces respectively). It’s got the traditional diced baby octopus, red ginger and green onion topped with a just right sauce made creamy by mayonnaise plus green laver (are those seaweed?) and fish flakes. Really, really yummy. 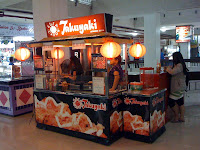 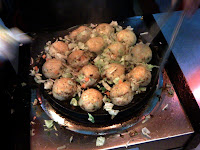 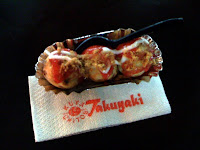 2. Kuya Chito’s Takuyaki – I learned about this through my landlady who frequents Makati Cinema Square which is just a stone’s throw away from Don Bosco where her son studies. It’s located near Jollibee and priced at P25 for three pieces. The cordial staff mentioned that they also have stands in Robinsons malls. Based on the Wikipedia entry, their version of takoyaki may sidetrack almost unknowingly. They have cabbage, lots of it actually, plus carrot and some thinly sliced octopus (I am not sure with this one). The dumpling is comprised mostly of cabbage and it is fun to watch how the little amount of flour and egg help mold into a ball. They also have the usual sauce, be it hot, sweet or a combination of it, and mayonnaise then you’ll be asked if you wish to have fish or beef flakes. My first try made me order for two more servings. Very filling and healthy. 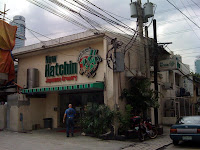 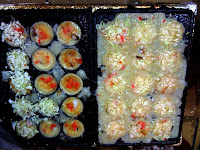 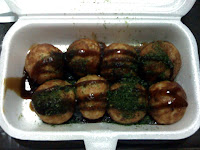 3. New Hatchin – I got the info for this one through Donna, an officemate. She claims that it’s the most authentic of all based on blog hits, I presume. Since the place, a Japanese grocery, by the way, is not far from my place, I gave it a try. It’s located at Sacred Heart St. in Makati, just near the national shrine of the Sacred Heart of Jesus. The challenging part is that they cook takoyaki only on weekends and it runs out really fast. Try to be there between 11am and 3pm to secure your craving. Eight pieces at P78 and very much similar to the ingredients from Maru-Maru. The difference is the sauce. It’s a little empowering. My landlady thinks that it’s got more Kikkoman in it. But I like it nonetheless. It doesn’t have mayonnaise but it has the green laver. 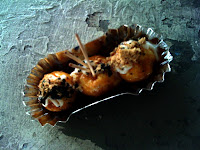 4. Sakoni – Since this one got me the groove, I have to include this on my list. The problem is that I didn’t get many details about the stall. As far as I know, it has “branches” in Fairview and in nearby places but none in Makati. Anyway, their booth in front of Wilfrido Ma. Guerrero Theater in Palma Hall/AS Building in UP Diliman is outright with the claim that it’s a vegetarian goody. True enough, it has cabbage and diced octopus but compared to Kuya Chito’s, their version has more flour/egg base. It has the usual sauce and mayonnaise topped with what looked like a pork floss (I didn’t bother to contest if it’s really vegetarian). I tried visiting Palma Hall again one Saturday, with no DUP performance in tow, and the stall is nowhere to be found. Maybe I’ll just have to wait for the next theater season.
Posted by Manuel Pangaruy, Jr. at 9:02 AM