Laughter is not Always the Best Medicine 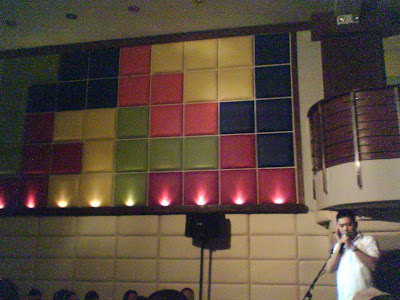 Monday morning, I was attacked by a sore, sore throat (thanks to three servings of ice-cold Cerveza Negra from Akafellas night). I wasn’t feeling well the whole day. I even begged off not to join the lunchmates gimmick for that day but was discarded.

At 7pm past, Hubes and I were already leaving for Greenbelt 2’s Spicy Fingers. We met Anne, Hubes’ housewife, at National Bookstore in Greenbelt 1 and secured our reserved table in the restaurant. It was a Comedy Cartel night, a brand of stand-up comedy that showcases mostly on observational humor (well, anything that is not your usual The Library/Punchline type of kick). The rest of the guys, Pipe, Iam and Ge came right before the act began. It was a nice jumpstart when Hubes and Anne shared the good news that they are going to have a baby. I remember Hubes loving the scene from “Meet the Fockers” about the baby’s first word: a**hole.

The set for the night consisted of around seven acts from different Comedy Cartel members, both amateur and veteran. Some punchlines were good but I don’t remember everything. But surely they made me laugh. Tim Tayag, probably the most popular among the lot, delivered some “tabo” (dipper) stories and the different “psst” moments. Food was also good.

After the show, one of the members, Stanley Chi made some kind of a small talk with our group. We ended up having his calling card and a short “okray” moment for all the Fil-Chi (particularly Hubes). Photo session was called for the situation.

I reached home at around 10:30pm, not feeling any better. Maybe I should have followed my instinct on having rest instead. The rest of the night was a major bout on slight fever. I almost skipped work the next day. Thanks to my previous company’s jacket (more comfortable than the one provided by my current employer) and some fruit diet the following night, I managed to survive tonsilitis.
Posted by Manuel Pangaruy, Jr. at 3:02 PM