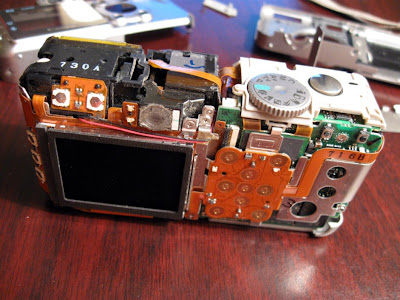 July 20, 6:28pm. I’m sitting here in one of the couches of Atlanta International Airport’s Gate A16 area waiting to board for the Delta flight back to Lexington, Kentucky. I’m facing a standard door-sized glass window, catching some two to three seconds of planes ascending. To my right is a Starbucks stall (but I had Dunkin Donuts’ large hot coffee and a vanilla kreme donut).

It was exactly a week ago when my beloved Canon S60 made a not-so-graceful exit from this cruel world. It’s been with me for roughly two years and six months. As far as I can remember, I got the idea of buying that model through Josh who had the same toy while we were assigned onsite for the Belfast project. I did not even check for its specs, I trusted Josh’s taste and eye for good stuff. I think I borrowed his camera over one London weekend and from there, I was hooked with the features (especially the C mode from its “creative zone”).

My Canon S60 is, a matter of fact, my very first digital camera. A friend from Singapore got it for me for P3,000 cheaper compared to having it purchased in Manila. With it are a cleaning kit and a sling camera bag. Just like a girlfriend (as if I’m credible enough to use this metaphor), my departed camera has been with me through thick and thin, through Cubao-X and Venice, through rain or shine, through lovelife and heartaches, through mini-lives and mini-deaths.

On my trip to New York (with Allan, Vianney and Waw), under the Brooklyn Bridge, my camera began showing signs of what’s about to unfold two weekends after. An error E18 was displayed (and still displaying until now). Google says it’s about the lens being stuck due to a fall or any incident similar to that. I remember that it had a major fall when I was on top of a jeepney on my way to Sagada from Banawe. I forgot to zip the sling bag and from about ten feet, it hit the rocky ground in front of a gigantic Marian monument. A group of Koreans then were all pointing to my poor camera while I was clueless of something that is unimaginable of me (knowing me being OC and stuff).

Nothing glaring about the fall’s impact to my cam. Just some scratches and, pretty much, that’s it. It was working fine. From that summer of 2007 down to the last July 4th weekend, my S60 braved through a lot of storms. And that meant a lot to me. My Canon S60 has always made me proud to say that my shots are “plainly point-and-shoot shots” (and made me not to clamor much for DSLR).

To my departed friend, my Canon S60, thanks to all the wonderful memories you’ve given me. As one of the poems said, “you’re always be my north”.

An artist is as good as his last performance, so to speak. Check out my Canon S60’s swan song from this link. Pictures were taken from my very first interstate long drive. From Kentucky’s Corbin (where Col. Sanders of KFC first concocted his secret recipe of 11 herbs and spices) and Berea (awesome Craft Festival) up to Ohio’s Cincinnati (specifically to an amazing plaza called Fountain Square where three scoops of Graeter's Ice Cream were waiting), and again, from Kentucky’s Louisville (with that giant baseball bat at the Slugger Museum and Factory), Elizabethtown (remember that Orlando Bloom-Kirsten Dunst film?) and Hodgenville (the great Abraham Lincoln’s birthplace) down to Tennessee’s Nashville (home to US country music). The last pit stop was not documented as my Canon S60 was already six feet under before leaving Hodgenville.
Posted by Manuel Pangaruy, Jr. at 8:31 AM