From left to right:

1. Chickee - She used to represent Jolly Chicken Joy but I no longer see her around. I think she was already laid off for she's too generic. Baka sa Mc Do na s'ya lumipat;

3. Milko - He used to represent milk shakes. Yes, they had milk shakes during the 80's. Since the product is not anymore available, Milko has to say goodbye too (he looks like one of my officemates);

4. Hetty - As in spaghetti (too given). She's still around. She recently starred in a backdoor scandal with Jollibee but I think the company gave her a second chance. Vanessa Hudgens, you are not alone;

5. Jollibee - Everybody knows Jollibee. I had a picture with him (or her?) finally when my niece celebrated her 3rd birthday in our house. Oh boy, was I teary eyed;

6. Lady Moo - Honestly, I don't know what this girl represent. Beef patties? But we already have Mr. Yum and Champ and that makes her redundant. I hope she got the separation pay she rightfully deserved;

7. Champ - Jollibee's answer to Big Mac. I am not sure if he's still around. I haven't seen him for a long time. I'm sure he's a he for he only wears nothing but a boxing shorts and robe. I remember I had a picture with him when my brother brought me to Manila Zoo when I was in Grade Four. I was starstruck; 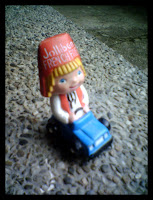 There's another mascot named Popo to represent fries. I am not sure but I guess the time I got that Jolly Kiddie Meal toy set, the company was already starting to cut its budget and recession was becoming trendy.
Posted by Manuel Pangaruy, Jr. at 10:59 AM