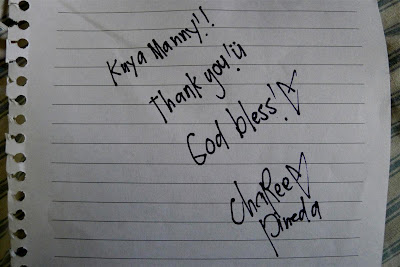 I got invited to an anniversary gathering organized by the fans of JM de Guzman and Charee Pineda called Juamee. That was mid-October if I remember it right and it’s held in a club house somewhere along Timog Avenue. I introduced my self to Charee and reminded her how much I annoyingly like her in Ron Bryant’s “Alon” where she won Best Actress for Cinema One Orginals 2008.
Posted by Manuel Pangaruy, Jr. at 5:05 AM