I’m not sure if I’ve been to a Taiwan film festival before. They were probably having their first attempt last October of 2011 when I saw three feature lengths and two shorts from their list. It’s free and it’s at the Shang so I took note of all the precautions that I could think of: choose only one film a day or two out of three, just skip the one in the middle, the box office staff wouldn’t care less and no food bought from somewhere else is allowed.

Compared to other free screenings, the festival was relatively well attended considering that they only have a total of eight films (five feature lengths, two shorts and one documentary) in a span of six days with three time slots a day. It wasn’t crowded which worked for me. I can actually dismiss my first Shangri-la Cineplex rule to avoid doing a marathon.

Here’s the rundown of the three feature lengths I caught:

Gangster Rock (Chie Jen-Hao) This bubble gum pop combines the action genre with a dash of musicality. A gangster becomes an angel to a rock band who’s making some ends meet through bar gigs and busking. Very Star Cinematic and at times laughable, the film makes a very little impact in either genre. The silly gangster boss is a joy to watch, as well as the rainy fight scene in the end. 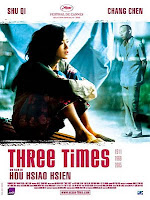 Three Times (Hsiao-Hsien Hou) It’s a good film for me, oftentimes a show-off of filmmaking styles from the director. There are three episodes in the film, each with diverse storytelling technique, and they are not connected to each other. The only thing that binds them is the pair of leads and perhaps the theme. First episode is about a couple during the 60’s and how love blossoms even with the lone presence of snail mails and telegrams. Most sequences involve long cuts which could drag a bit but nonetheless charming and romantic. The second episode is also about a couple at the turn of the century. This is talkier and the sets are limited giving a stagey feel. The last episode is contemporary and relies mostly on the angst as visualized through the same pair of actors. It’s a thrill to see different strokes in one sitting, as if you’re given with a sampler from the director on how vast and versatile he could get.

Zoom Hunting (Li Cho) This glossy film is as mainstream as the Gangster Rock though with a different genre. Its plot about accidentally witnessing a possible crime through a DSLR camera from another window has all the Hitchcock promises. Most of the time, it gets redundant with the twists like I think it’s almost over but it keeps on moving. I just hope the resolution is more satisfying because the intro and the middle part are very engaging.

And shorts (too bad I can’t find credits for them):

The Magical Washing Machine As the title suggests, it’s magical. It tells, in a modest span, a moving-on phase of a young woman who frequents a laundromat. At first, I was clueless with the dream sequences coming out of nowhere but it made its point clear when the protagonist finally made her first step to overcome her past. It got me.

Small Station Unlike the other short films that I’ve seen, this one has all the luxury to tell a simple story given with a limited time. It doesn’t even involve twists or a couple of events to perk up its narrative. It’s about a mother who brings her mentally ill son to a not so busy train station outside the city, a relaxing respite from all the hustle and bustle. The mother pictured here is caring, patient and has all the time for her son with special needs. It could be an awareness campaign on its own. I’m guessing that after they went back to the city, they’ll probably plan a new invigorating trip together.
Posted by Manuel Pangaruy, Jr. at 8:10 PM