Dubai – Day 03: The Palm, the World’s Tallest Building and a Warm Filipino Send-Off

(Top to bottom row, from left to right: stamps for the postcards (taken from a post office in Karama, Madinat Jumeirah theater, a beachfront taken from the monorail in the Palm Jumeirah, two pictures from Mall of the Emirates, the Emirates Building taken from the metro and three pictures of the Burj Khalifa)

At six in the morning, I sensed the urge from Jacky that he wanted to sleep beside me. I gave in. Maybe it’s the dog’s way of saying goodbye and that he was acknowledging the time we played and bonded. He slept on my blanket and I myself went back to sleep for two or more hours.

Filipino breakfast was served at Kape Korner in Karama (more pictures here). It’s a treat for us after visiting the post office to drop a hefty number of postcards for family and friends. I had tapsilog and Mike ordered some halo-halo for dessert. Everybody was attuned to the TFC show on the right. It’s the same building where one Chowking branch is stalled. That’s also the same building where we bought a couple of perfume as requested by friends. At 11am, we were already hopping to another building that sells souvenir items then to Madinat Jumeirah (no longer part of Karama) to visit one of the The Amazing Race pit stops (some pictures here). That’s also where the glamorous Dubai International Film Festival is held every December.

The rest of noontime was spent with a back and forth ride on the monorail (check out the video here) in Palm Jumeirah (the rest of the pictures here). You’ve probably seen it somewhere. It’s the manmade spot in Dubai that looks like a palm from a bird’s eye view. To access the station, you need to go to Atlantis Hotel which, according to Mike is a replica of the one in the Bahamas. There’s another water theme park in the hotel but we’ve got no time to explore it. I think one of The Amazing Race challenges was done there, particularly the one where the teams had to do the steep slide with some sharks swimming on the pool below it.

From there, Mike drove to Mall of the Emirates which is another huge mall. The interior is more of Old Town feel and most stores are high-end (more pictures here). We took the metro from there, going to as far as the airport and then back. Mike said it’s relatively new and it was his first time to commute by train (he looked more excited than I). It’s good to note that the ticket ranges from regular to gold passes. The more expensive it is, the more comfy your seats could get. There are some officers who check the tickets from time to time and it is important to read the dos and don’ts before taking the train. Good thing that photography is not prohibited. By the way, I slept on our way back, something that I couldn’t do in a jam-packed MRT (the rest of the pictures here). We returned to the mall at close to 4pm, had a quick stop at Ski Dubai (the world’s largest indoor snow park) and then got dragged by the discounted Rip Curl travelling bag. Surprisingly, we made it to our next stop just in time. 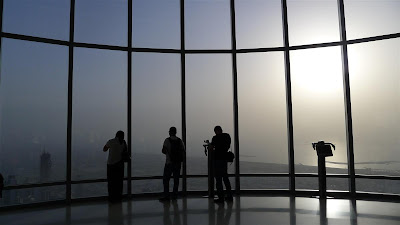 Towering at 828 meters and 160 floors, Burj Khalifa is currently the world’s tallest building (pictures here). Imagine a few more meters and it’s already a kilometer! The view deck, simply called At The Top, is at the 124th floor. You can see the city in 360 degrees including the project The World which is another manmade set of islands that resembles the world map. It was dusty on that afternoon and the sun was still up. Mike said that there could be a sandstorm somewhere nearby. Usually, he said, the sky is all blue. There are some digital binoculars for rent in the area, a souvenir shop (where we saw the Japanese ladies again) that sells some delectable but expensive chocodates (chocolate plus dates) and a very nice rest room. Check out how fast the elevators are in Burj Khalifa through a video here.

Before we left the tower, I was already receiving some text messages from high school batch mates and friends that we will be meeting up for dinner. Mike then drove from Dubai Mall (where Burj Khalifa is located) to Bur Juman where Barrio Fiesta has a branch. The dinner was just perfect and very memorable. It was my first time to meet up a high school batch mate/classmate or kababayans outside the Philippines. I can name all of them and I wish I could thank all of them enough: Andy (who was alphabetically seated before me during high school), Luis, Mike (of course), Isol, Nerisa, Lovelle, Lobell and Carol (more pictures with them here). It’s one of those rare moments wherein no matter how mouth-watering the food is, it’s the warm conversation that stands out. We spent the rest of early evening taking pictures in another area of the mall. Some even stayed and joined me on our way back to Mike’s apartment, waited for me to pack up and take a shower and then proceed to the airport. Mike and Luis were even pushing my cart on our way to the check-in counter. It felt good when friends, whom I only got acquainted for a short period of time, send you off to that extent. There’s this sheltering sentiment of friendship and being important. And to top the day’s goodness, I got upgraded to Business.