Dubai – Day 01: The Arrival and That Old City Charm 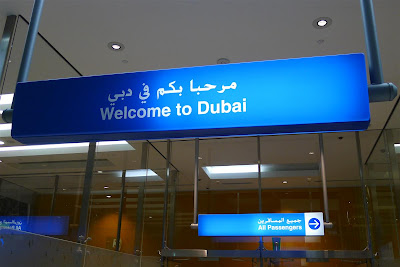 I passed through the immigration and all at around midnight. The queues were long and I wasn’t a Gold Skywards member (yet). There is a big sign there that leads to “Eye Scan” which I dismissed and went directly to the queue; only to find out later that I needed to accomplish it first as prompted courteously by the immigration officer (the only lady at that time). There were only three people ahead of me for the scan. My initial foolish thought then was that the process is used for health purposes. I was told by my friends that it’s more of an ID. That means, according to them, I already have a record in most Arabian countries. Some pictures of my touchdown here.

Mike was already at the waiting area when I got out. We went to the parking place which introduced me to the 40-ish degree Celsius Dubai weather. The airport is not that far from the city center (not a Heathrow kind of far) and we reached his place, a gated community in a manufacturing company area, roughly 20 minutes after. The concept of “area” as in IT area or media area was not clear to me then. We stopped at the nearby Mc Donald’s and I got myself my very first Arabian Mc Flurry (which is just the usual Oreo). That was also my very first encounter with Mike’s dog named Jacky, a bulldog from Russia, who is so huge and very active for its size. He ransacked my slippers the next morning, his way of giving his very warm welcome and his friendship.

My very first morning in Dubai started at around 7am. Got a quick shower (which, by default, is hotter than the usual) and readied my backpack and all for the 9am call time. Our plan then was Mike had to take a half day off in the morning and just report to work after lunch. We had breakfast at Subway (supposedly Mc Donald’s but the branch we visited had moved to another location) and off we braved the heat on our way to Dubai Museum.

Entrance fee is AED (United Arab Emirates Dirham) 3 which is around PHP 35 only. The museum (pictures here) is not that grand but it is housed in the historic Bastakiya or Old Dubai area. It was originally a headquarters and now houses a roomful of artifacts and dioramas. A big dhow, a boat, is displayed outside while a small traditional house with a distinct wind tower (seen almost everywhere in the area) is stalled near the entrance.

(Top row: all taken from the Dubai Museum; Bottom row: snapshots from Bastakiya)

From there, we walked along the small alleys of Bastakiya (pictures here) in broad daylight, armed with a bottle of water. The area is probably their version of Intramuros, only well maintained and will give you the feel what it was all about during the 1920’s. It was around 12 noon, very hot, and we’re the only ones strolling around and taking pictures. We stopped at Architectural Heritage Department, had a short break but still taking some pictures. The view of the creek and Deira is nice from the second floor while on our back is a nice mélange of wind towers and roofs in dusty cream hues.

Then we walked back to the Dubai Museum area and got through the textile souk (quick glance of the area here) on the right and reached the boat station. Through an abra, a small passenger boat, we crossed the creek for AED 2 one way. There are a lot of abras queued along the port. Just like the way with the jeepneys in the Philippines, they wait for the boat to be fully occupied before sailing. Upong-piso, so to speak. We had a short stop at Deira port, which is lined up with financial centers and some establishments, and headed back to Bur Dubai. More of abra ride pictures here and a short video here.

(From left to right: taken from the perfume souk, gold souk and spice souk)

Still sweating at around 2pm, we left Bastakiya. Mike had to report for work so he dropped me in the gold souk area in Deira. Nothing much to do there but be amazed with the gold jewelry being sold in the stores similar to those in Ongpin. Some didn’t mind having their wares photographed but some put a warning by the window. Aside from the gold souk, there’s also a perfume souk and spice souk (more pictures here). From there, I took a cab heading to Wafi Mall (AED 35). That’s where Mike and I will be meeting up at 5pm.

The Egytian-themed mall (more pictures here) was very quiet when I got there it. Locals were probably taking a nap or at work. I took some pictures of the sphinx and the mummies and looked for a good lunch. The food court with four or five stalls is not that easy to find (still not busy at that time). There’s a Timezone arcade area beside it and closest to it is a Chinese restaurant called Chinese Palace where I got my spicy Kung Pao chicken. Not surprisingly, the staff who entertained me is a kababayan. There's a short video here of my escalator ride from the food court down to the ground floor.

Energized, I went to the mall’s gold souk which is very charming with its dim lighting and still very quiet. There are other things to buy there but I didn’t bother checking out. I spent the rest of waiting time exploring the nearby stores and took a break at Wi-Fi-ready Rose Café on the top floor with a big artsy piece in the middle that resembles the one in Berlin City Hall. I had a white cheese and honey crepe served with a chilly fruit cocktail drink, a relief for somebody who was adjusting with the weather and still coping with jetlag. And there went my first “This is life!” moment in Dubai. If Mike was late even for a couple of minutes, I would have probably dozed off.

From Wafi Mall, off we went to the world’s biggest mall, the Dubai Mall (pictures here). It is so huge that I can get lost easily (MOA is also big but the interior is not difficult to get familiarized with). To my delight, the first part that Mike showed me was the cinema complex of the mall called Reel Cinemas which houses 22 theaters (the most numerous I’ve seen, I think). There’s a digital bulletin board in one corner and there’s an announcement as to what cinema is about to open for screening, just like boarding a plane. In addition, the mall has an indoor giant aquarium with recognition from the Guinness World Records as the largest single acrylic panel. It also boasts of the biggest candy store in the world, the Candylicious, plus the posh Armani Cafe and a technicolored floor that serves as a runway during fashion events.

There we purchased our tickets for At The Top (Burj Khalifa) for a 5:30pm visit on my last day (Wednesday, July 13). We paid AED 100 but feel free to visit the view deck’s website for more details and on how you can optimize your entrance fee. We also met Luis there, enjoyed the musical fountain (video here) a la Bellagio in Vegas just outside the mall and called it a day with an Asian dinner at the food court. Nightcap at home was a double treat of keeping up with my teleserye fix through TFC and playtime with Jacky. By then, the dog was very much eager to sleep on my bed.
Posted by Manuel Pangaruy, Jr. at 11:46 AM