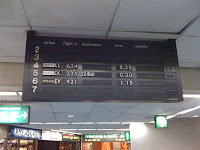 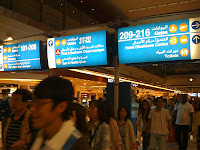 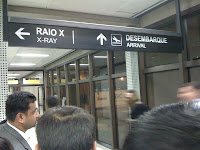 Forgive me for the title if it may sound bragging. Just treat it as something referential to my other work-related trips and how things mature in between. Below are some Zen-up notes:

1. It’s a good practice to share a nice lunch or dinner with friends before the trip. Being away with family and friends is like being imprisoned for a short period as you won’t be seeing the same care group for a while. To compensate prison life, I invited high school friends to have lunch with me at Dencio’s in Harbor Square near CCP on the day of my midnight flight. I capped it with watching an obscure but really good Pinoy film entitled “Krimen: Kayo ang Humatol” by Jun Raquiza. Hopefully enough emotional investment for the trip;

2. Glad to see the new embarkation card with PNoy on it, a great reminder that we really have a new president. It used to promote Smart before. What didn’t change is this certain airport user’s fee of P750. What do they do with the money? I don’t remember using other international airports with a fee;

3. Ninoy Aquino International Airport keeps up its reputation as something old and gray. Symbolically, it makes you want to leave the country right away and reach your destination with probably more OK airport. But wait, you haven’t seen the airport in Sao Paolo yet;

4. As practiced, I used to visit Kopi Roti before having an international flight. The branch in the waiting area has the same goodies only a bit expensive;

5. There’s a joy in getting seated with fellow Filipinos. If a conversation ensues, it makes you realize your worth on why you’re having an onsite assignment and that you need to be back to dear country at least after three months;

6. Manila to Montevideo is probably the longest flight I had so far. Manila to Dubai is like eight hours then Dubai to Sao Paolo, a whopping 14. Then close to three hours is the last leg from Sao Paolo to Montevideo;

7. Reaching Montevideo is roughly worth P160k;

8. As much as I wanted to watch a couple of movies on a 14-hour trip, the lack of sleep crept in. I only caught Neil Jordan’s “Ondine” and Grant Heslov’s “The Men Who Stare at the Goats”. I am getting old. I remember catching four movies at least on a 12-hour trip before from Manila to Amsterdam;

9. Dubai International Airport is probably the airport to beat. It looks busy and cozy at the same time. The area where the Emirates lounge is seated brought back some good old memories of my first onsite to Paris. I was with Sajo then. The turbulence experience we had on our way then was for the books;

10. Emirates boasts not only of a good onboard service (like the starry night simulation) but also of other perks. For instance, they have this Courtyard Café which serves buffets to transit passengers. Food is similar to what you’re having inside the plane but having it for free while waiting for your next is a different story;

11. Onboard the Sao Paolo to Montevideo flight, I was lucky enough to be seated with a rowdy Uruguay basketball team. They were ecstatic. They were either dancing or just plain wisecracking. That gave me the impression that Uruguayans are very fun-loving people. I even remember the coach cursing the word “puta” while the team player beside me occasionally gave that apologetic look. Right before the touchdown, the coach was asked to proceed to the pit to announce that they won a championship somewhere (thanks to this vegetarian looking guy who translated everything). I managed to sneak in some paparazzi shots just in case they are that popular in Uruguay;

12. Crossing the immigration line was easy. The hardest part was the hint that you’re going to get your equipaje (luggage) only a day after. For the record, three of my five onsite travels encounter with delays so I was pretty much ready for it. Mom kept on reminding me to have a set of office garbs in my carry-on. Best advice ever;

13. I started writing this blog at 4am, Montevideo time, in a nice room with comfy bed at Marti Apartment Hotel. Jetlag Evil Empire is winning;

More pictures here. Next blog is most likely about my first impressions with Montevideo.
Posted by Manuel Pangaruy, Jr. at 4:34 AM