First Impressions on “The River Where Painted Birds Live” 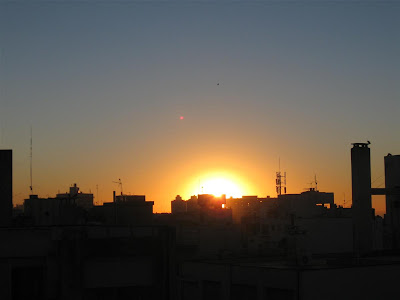 Aside from the recollection I got on my flight to Montevideo regarding the locals being fun-loving, below are some thoughts on my first South American city, all conceived during the first week:

1. It’s chilly and sunny during this time of the year. Colder than Baguio during lunch time but not as cold as Utrecht-weather in February. Forget about the sweaty Latinas gyrating in most music videos. It’s really cold here;

2. In the area where I am staying at (Pocitos), most residential buildings are all white. With the help of the river/sea nearby, it creates a very Mediterranean feel. Very photo-friendly, I would say. As for the structures in the city center, it’s a different story. For example, medieval period is best captured in the city of Rome or somewhere else. Salzburg in Austria also represents the country’s glorious past. In Montevideo, it seems like it boomed during the 70’s and got stuck along the way;

3. Since we’re colonized by the Spaniards, the language barrier is not a major problem. They don’t speak English much compared to, say the Dutch, but some words are easily recognizable. While reporting for my luggage that didn’t make the Sao Paolo trip, I was prompted to check out Reclamo de Equipaje counter. Others are too obvious like “tomar” which is close to “toma” or in a beer drinker’s term, “inom”. As of this writing, I was able to fetch my laundry “con lava y plancha”. There’s some adjustments here and there like their “pollo” (chicken) is pronounced as “pozzo” instead of “poyo”. So imagine “pastillas” being said as “pastizzas”. Biggest reminder so far is that you cannot mistake “puto” for a rice cake;

4. The client’s office we are reporting at has a sign on top that says “Imprenta Nacional”. My guess is that it’s a historic building that was just given a make-over. I can say that it’s the best onsite office for me so far. I like the interior which looks like a disrupted building in construction, complete with brick wall (reminiscent of one of the hotels we were billeted at in Vigan, Ilocos Sur) and contemporary lighting. The irony there is like being reminded that work is still in progress;

5. My impression with the taxi drivers here is that they are always in a hurry. It always makes me look for a seatbelt at the backseat. Quoting a colleague, “Hindi sila nagmemenor dito.”;

6. Though the city looks sleepy, I was fascinated with their cab customer service. Prompted by the vouchers from the client, we call a cab here through 141. If you phone from a landline, the system would have probably stored your location and the voice recording just returns the mobile number and the number of minutes it will take to arrive. If they say three minutes, it’s really three minutes. All you have to work on is your instructions to your destination (which on my part I haven’t yet perfected enunciating the street name “Cuareim”);

7. Food is generally familiar. They have this breaded meat fillet dish called milanesa with fried egg on top (this is the first ever local dish that I tried and managed not to finish because of the bulk). Chivito, on the other hand, is the national dish of Uruguay (which, by the way, is translated from Guarani language as “the river where painted birds live”). It’s a sandwich-like dish with fillet mignon served with sidings like French fries or mashed potato. Since most of the servings are big, when not sure, I always default my order with pollo grillado. Worth mentioning too is their leche flan (very similar to ours) which is best enjoyed with some scoops of dulce de leche (milk with caramelized sugar).

8. I am still struggling with locating their downtown cinemas. On personal note, I haven’t really explored their tourism website yet. I just Googled “cinemas in Montevideo” and one of the links returned to me is an art house cinema showcasing foreign language films. Fortunately, it’s just a few meters away from the hotel. They are actually having a Kim Ki-Duk restrospective next month. Unfortunately, non-English films are subtitled in local dialect;

9. I can say that aside from being fun-loving, locals are respectful and nice. For instance, people at the office are accommodating and all-smiling. Taxi drivers, at some point, are very patient with our lack of grasp with the language. We usually get the occasional stares, especially from the kids, but that’s about it. For now, I have yet to meet a “kababayan”. I would be disappointed if I couldn’t find one. It says a lot about the place if more Filipinos live in the area or not; and

10. There are some calesas roaming around the city. But don't be fooled. They are not for commuters. It's normally carrying tons of garbage for recyling, their version of our kariton filled with probably bote, dyaryo, garapa.