Thoughts from the Swimming Pool 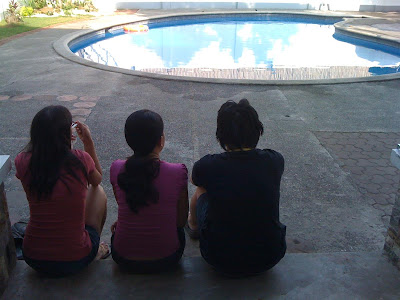 As of this writing, I am still in the process of recuperating from all-night booze and a little swimming at a certain Joseph’s Resort in Antipolo City (near Assumption College there) last Thursday. I didn’t know that at this age, I can still survive such kind of partying like a college student. Must be the company I was with.

Aside from the place being well-secured (complete with a caretaker who can be approached almost any time of the night), the cottage we were in is also well-maintained, complete with neat beds and sheet, a mini-ref and a flat screen TV on the second floor. The swimming pool can go as nine feet deep and the area that serves both as a bar and kitchen is serviceable enough. Toilets are equally clean.

The partying proved once again that you can never go wrong with two important V’s: videoke and vodka. Mood was generally fun. No room for emo and the like (well just less of it, I think) and the night (and the morning after) was spent with mostly singing. It’s an advantage to say the least that I was happy. The downside of that is this lingering thought that sooner or later, I may be seeing these guys only on an occasional basis. No more flying pillow or a noisy dog tag or a hideous question on how to make a woman happy.

Seeing people leave a company is like having a break-up. It’s like being dumped for someone else. Most of the time, it’s painful. The only consolation there is to understand the reasons behind it which varies from incompetency down to this so-called pursuit of contentment. Acceptance is indeed happiness’ best friend.

Furthermore, seeing peeps leave is like sitting on an almost empty jeep, watching passengers alight and take their own tracks. I wish I could discourage them from doing so but the stop I am heading to may not be healthy for them (or it’s the other way around). In a moment like this, I have to trust manong driver to just bring me to my own destination safe and sane. This doesn’t mean that I am sold to the idea, that everything will be OK and that I am not affected. This only means that life is mostly like that: sucky and freeing, evil and orgasmic, destructing and constructing. In between, there’s camaraderie. In between, there are lots of beer drinking, jump shots, tong-its when drunk, singing “Doon Lang”, a tap at the back and a whole lot more.

To you with whom I had a great time spending an evening by the swimming pool, thank you. Let’s not end our journey there. Pl0x.