The Phantom of the Libera (Show) 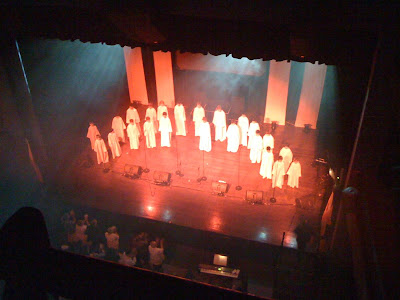 My music inclination last Friday somewhat surprised me. I don’t know what’s got into me but the road led me to RCBC Plaza to catch the Libera show at 8pm. The little boys’ choir music, just a background, is synonymous to Vienna Boys Choir (probably the most popular example), Montserrat Choir in Barcelona and to our very own Loboc Children’s Choir in Bohol.

But the whole experience was not smooth and I have a story to tell.

I came to the Carlos P. Romulo Auditorium only to discover that the tickets had been sold out. It’s not that I was not anticipating it (tickets are very cheap at P850 for orchestra then P650 and P500, I think) but the contact details on their show poster seemed bogus and there was no way for me to secure a ticket. I thought then that the tickets cannot be bought in advance so I arrived at the venue an hour over only to be disappointed. Last resort was to buy the CD for the autograph signing which will be held right after the one-hour concert. At least, I thought, if I can’t see them perform live, I have a signed copy of their music.

Just before I went to Soup Kitchen, I even made an appeal with the resident ticket seller that I will buy any returned tickets in case there’s any. The potato soup and herb bread had never been that comforting. Roughly minutes before the start, I came back to the booth but to no avail. The last two tickets were fetched, according to the seller, by the British consul himself.

Got no choice then but to watch patrons enter the auditorium. Then I started talking to this guy wearing a “Spring Awakening” jacket and shorts and shared my desperation to watch the boys sing live (let’s just call him “Mike”). He mentioned that I should give him some minutes and maybe he could let me in. I thought it was a joke and even considered him to be a scalper. Mike left after a moment and I just stayed in the area.

Five minutes before the show, I saw Mike again on the other end prompting me to follow him. We rode this small elevator and went past two more doors leading to the top most part of the auditorium, something like close to the ceiling. Mike happens to be the official caretaker of the theater and the place he just brought me in is where the big spotlights were used. There I met the spotlight guy (let’s just call him “John”). A Monobloc chair was waiting for me there and casually, Mike mentioned that so long as I don’t have fear of heights, I can enjoy the show for free. Out of courtesy, I offered a payment but he refused.

There I realized that I was wearing my blue “Spelling Bee” shirt. I got it after watching the production by Atlantis which is the same producer of the local staging of “Spring Awakening”. Maybe that did it. Mike shared some stories about theater productions which I gladly welcomed and listened to with enthusiasm. He’s amazed that I dig stage plays and the like. We exchanged contact numbers after he said “Minsan, may mga complimentary tickets ako, ‘di ko naman alam kung sino ang mga bibigyan.” John, in a loud voice (that’s even during the Libera performance), would share his own stories like the best time to watch a play is during the rehearsals. Mike would occasionally and jokingly shut him up and John would retort “’Di naman nila tayo naririnig eh!”

So I watched the Libera show for free and from a different and exciting angle. I can say that it’s one of the best concert experiences I had, regardless if one of the soloists from the group didn’t reach one of the songs’ high note. For the show alone, it’s a bit short for me. All in all, I like their repertoire that includes Enya’s “Orinoco Flow” in which one of the boys mentioned about the only place they’ve been to in the song lyrics is Cebu (they had a concert there last year). “Bayan Ko” was their encore song. Sweet.

The autograph signing was also fun because I did try my best to catch them on iPhone without even knowing their names or whether they are popular among the lot. I heard stories from the guys behind me that Koreans are annoyed about Libera having a longer stop in the Philippines than in South Korea. On the contrary, the Korean girls in front of me seemed to have a ball. They even gave the boys some lollies during the signing. I never attempted a small talk but at the back of my mind, I was guessing, the boys might be tired and sleepy.

Hi, there. Thanks for reading my blog. And you're writing in Filipino? :D Go ahead, feel free to post the pictures. Maybe you can just put a link to my blog. Thanks.