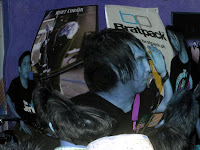 Last weekend (June 30 – July 1) was the first weekend for the third serving of Virgin Labfest. It’s an annual event that showcases new (hence the term “virgin”) works from the playwrights of Writers Bloc. Consider it the Cinemalaya of Philippine theater.

Along with my officemates, we ventured into catching the first set called “Madadramang Pamilya” last Friday. The first play was written by J. Dennis Teodosio, a familiar name to me ever since I made a mini-review of his work called “Si Geegee at si Waterina”, a fictional conversation between Justo Justo and Walter Markova. His entry (well, one of the two entries) this year was a skeletons-in-the-closet drama between an aging mom and her son in the US. It is directed by theater personality and PDI editor/columnist Rito Asilo. The other two were “Looking for Darna” and “Teroristang Labandera” (for me, it’s the most engaging among the three plays). We ended up having a late dinner at Dencio’s in Harbour Square.

The next day, I woke up early to catch the “Children’s Play” set with “Kung Pwede lang Ipagpalit ang Tatay”, “Bertday ni Guido” and “Obra ni Maestra”. So far, this is my favorite set.

“Ipagpalit…” is about a boy (and his younger sister) who traded his dad with a pair of goldfish. Their mom later on asked them to look for their dad. The owner of the goldfish traded his dad with a violin (and the violin’s owner, with a trolley; and the trolley’s owner, with two chicks…). After a fun journey, the two kids eventually found their dad and returned home. “Bertday ni Guido” is set in the 80’s and is about Guido who’s having a birthday on the same day as EDSA Day. He was anxious that his parents who were in the rally might not join him on his birthday party and might only end up with “coke, ice cream, cake at spaghetti” (as sung a la musical piece composed by Vincent de Jesus of “Zsazsa Zaturnnah” fame). The third one is an action-packed children’s play complete with colorful costumes and stunts. “Obra ni Maestra” is written and directed by Niel de Mesa who wrote the popular and Palanca-winning piece “Subtext”.

The event was capped by a meet-and-greet with the great Rene O. Villanueva. He wrote “Bertday ni Guido” which happened to be the most enjoyable among the three because of the audience interaction. I asked for an autograph. He looked old and a bit frail. Na-stroke daw kasi s’ya. I said, “Sir, batang Batibot po ako. I owe you my childhood.”. He just smiled and wrote “Salamat, Manny. EDSA was a party. Rene Villanueva.” on my ticket.

During break, I went to Mall of Asia to fetch my “Harry Potter: Order of Phoenix” tickets at IMAX, had lunch at French Baker and hurried back to CCP for “X, X and X: Hindi Pang-Isip Bata” set. Really, really disturbing.

At exactly 10pm, I was already at the gate of Saguijo. I met my roommate there and another friend. It was Rivermaya’s first gig without Rico Blanco. Other bands like Sandwich, Pedicab, Cambio, the reuniting Fatal Posporos and Sugarfree also performed and gave support to Rivermaya. It was a sad experience. They were all wearing black shirt. Another Pinoy band is about to fall and it’s heartbreaking to see Mark, Mike and Japs survive the rain. My roommate commented that it could be the last gig of the band. They performed some Blanco songs and it was hard to take even with the help of the Dancel brothers Ebe and Vin. There’s one single that captured all the questions and uncertainties that Rivermaya is now facing. It is entitled “Sayang”.
Posted by Manuel Pangaruy, Jr. at 7:29 AM

hi, would you know where i can get a script of subtext? thanks.