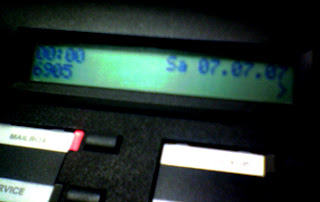 The Bible refers to “7” as the perfect number. But last July 7, 2007, I didn’t squander the day perfectly grand as foreseen but it wasn’t that bad. I started it actually with an overtime work, finishing some stuff. That’s after Christina Aguilera (yeah, I watched her concert at the The Fort open field, complete with midyear rain showers) did her thing for the Asian leg’s Manila stop of her Back to Basics concert. I was with officemates Richmond and Sarah (a big fan and a VIP seat taker).

Christina is great. I always admire the way she does a counterpart of Michael Jackson’s famous dance step (the one with his “pototoy”). Christina on her part does it with her “monay”. And maliciously aside, that’s a loud statement for those vying for gender equality. Of course, there’s more to Christina than that. The “birit” voice quality didn’t fail up to the last song. People were singing with her on the encore song “Beautiful”. She did it with ad lib and “kulots” while the crowd was doing the “first voice”. What a musicality!

Actually, I am just explaining why I enjoyed working at the office ‘til the wee hours on that allegedly lucky date.
Afternoon of 07-07-07 was well wasted with the second round of Virgin Labfest 3 (two sets, “Identity and Politics” and “International Night”) at the CCP. It was enjoyable still and I ended up craving for more. Same time, next year perhaps (no pun intended).

The rest of the day was spent enjoying the breeze from the rain showers while cruising along the Harbour Square. No sunset, no mandarin sky, no sentimentality.

Just the breeze.
Posted by Manuel Pangaruy, Jr. at 1:07 AM