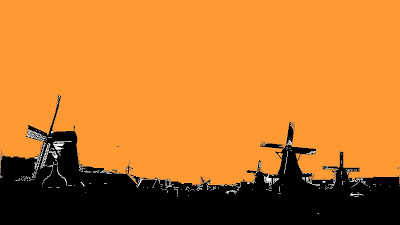 Eleven days after I arrived here in Apeldoorn, Kate, Claire (a colleague’s sister who’s having a side trip in the Netherlands from Frankfurt before heading back to Manila) and I met up at the train station. It was cold as expected. I only have some clothing for spring and the extended winter on that Saturday morning was meant to be some sort of dissuasion.

Zaanse Schans is a small village strategically located close to Amsterdam. By strategically, I mean another tourist trap for those who are craving to see some windmills and have no time to go as far as the Kinderdijk. It’s like a Dutch version of the now defunct Nayong Pilipino or that theme park in Pampanga that was erected in time for the Philippine centennial. I didn’t manage to check if the village was artificially constructed or it was really a liveable village that’s just converted into a park.

The closest train station from there is Koog-Zaandijk. Of course, 9292.nl can come up with a route that is more convenient but the 20-minute walk from the train station includes getting a free map to the village. Don’t bother getting one from the store at the station. The guy who looks like the owner might encourage you to buy something to hand you a map in return. Don’t fall for that. Securing the map just outside the station some sort of jumpstarts the visit as you have to figure out how you can best pull the handle from a box that imitates a slot machine.

From that machine, it would take around 10 minutes of leisure walk to finally reach the first windmill at the foot of a bridge. I saw a lot of side trippers with their carry-on bags and they looked fine with the idea. From the bridge, you can already have a clue of what lies ahead. Three or four windmills are lined up at the side of the river and some old and small houses can be seen from there. If not too windy, it would be good to warm up the camera. It would take another five minutes to finally reach the park.

Kate, Claire and I spent the first 30 minutes checking out the houses that serve as something else. There’s one that is converted to a clock museum then the first Albert Heijn (probably a Dutch counterpart of Henry Sy only in a small scale retail business) store then more houses of the same kind and purpose. We went into a barn-looking place with a windmill on top which is specifically intended to pulverize some spices. From afar is another set of houses/barns for the clogs, cheese and more. Souvenirs are everywhere. There’s an art museum close to what looks like a parking spot for buses on excursion. We ended up having our very late lunch in the cafeteria there with apple pie and some chips and later on decided to just make a full stop at Amsterdam to get a real meal (Coco’s Outback is the place to be).

So there went my first brush of the Netherlands after seven long years. Up to now, I am still considerately rethinking why I did not bother visiting Zaanse Schans while I was here the first time around (wait, more of the second time as I had a really quick visit to Amsterdam in 2003 while stationed in Paris). Some familiar and awesome memories are starting to spring up and I am in for those digital boards that display the bus schedule. An anonymous OV Chipkaart is also kept in my wallet and it’s very comfy to just swag the thing on a yellow marked box inside the bus (or outside the train stations).

I did not say much about Apeldoorn, my new home for the next two months, as I believe the snapshots here can do the job. Also, it would be ungrateful too not to make a day stop at Utrecht which became a comfort zone for me for the whole 2006. I only did that during Easter Sunday (check out the pictures here) and what a way to celebrate new beginnings by feasting on some all-time favorite dishes at Tai Soen. I guess, for now, I can say that I am really back and this time more than equipped with a blog title that is inspired by a John Lloyd - Bea movie.
Posted by Manuel Pangaruy, Jr. at 12:05 PM

jealous! i want to visit someday