Paul McCartney and the 28,000 Uruguayos 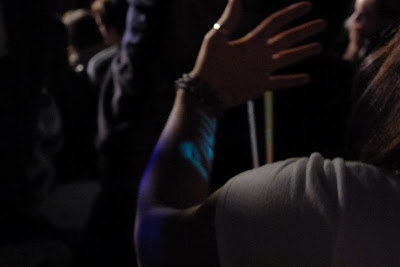 Last Sunday’s concert of Paul McCartney at Estadio Centenario here in Montevideo is momentous for the Uruguayos as it was the Beatle’s first performance in the country. In fact, Wikipedia reports the phenomenon of having 28,000 tickets sold out on the very first hour it was made available in the market. I’m glad, more of blessed, that I was part of that history.

Let me share a lucky bastard story. It was too late for me when I read from the papers that the concert was taking place in weeks. I was in a barber shop then. On the next day, I hurried to the Abitab close to the office but I didn’t get the bad news right away (the guy doesn’t speak English). I was given with a piece of paper that contains another contact number which I tried calling in but it seemed like the recorded message was just set on repeat mode. In surrender, I emailed a colleague asking if she has a spare ticket through his connections in the team (she always surprises us before with regard to tickets). That’s when the world crashed and informed me that the tickets were finished as early as the first hour it became available. I felt bad because I already posted in Facebook that it’s a must-go for me. Days later, I got a phone call from the same colleague telling me that I should thank her big time. One of her teammates has a friend in Abitab who happens to secure one spare ticket for me. It wasn’t the cheapest one though. I paid UYU 500 or PHP 1,058 more compared to the one that I was originally planning to buy (UYU 900 or PHP 1,903). Surprisingly or not, the tickets reached as crazy as UYU 15k or PHP 31,711 for the VIP ones. 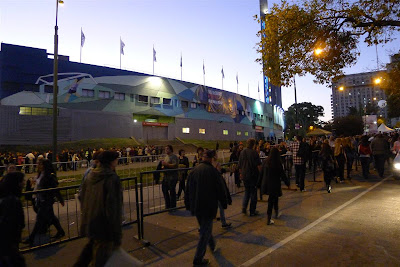 As early as 6:30pm, people were already queueing

The week before the event, I already made a research on the bus numbers to take. It’s a whopping crowd of 28,000 so I had to be ready. Going there is easy. Going out of the mammoth soccer arena is different. Clocked at 6:30pm, I was already at the venue, specifically at the Olimpica side. Long queues for the VIP’s were forming. I had to brush up my limited Spanish and ask those ushers in neon vests (there’s plenty of them) regarding my section (Colombes 2). It’s just one arena and it didn’t take long for me to locate my gates (there are four choices printed on the ticket). I had to yield a bit to snag a souvenir shirt (got an XL as L’s were finished already) and the concert tour program (each costs UYU 500 or PHP 1,058, very expensive).

There’s a fleeting feeling when I finally saw the enormous crowd on that autumn evening. It was my first time to be in an event with that huge number of people. With the aid of the maps posted almost every corner and with a little help from the security personnel, I finally positioned my section which is a soccer field away from the stage and a few bleacher levels up (very far and I liked it). I just chose a seat that’s not obscured by a spotlight tower in the middle of the arena and waited. 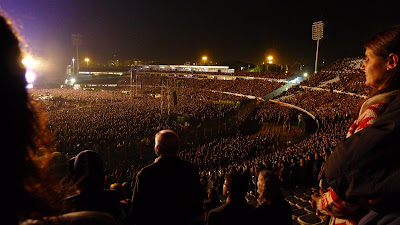 The 28,000 patrons who finished the tickets on the first hour

At 8:30pm sharp, two giant vertical video walls started to light up. It scrolled down with bits and pieces of what could have been a musical journey for Paul McCartney while a medley of his songs was played. It lasted for close to half an hour which I didn’t bother since the video walls are too big (from the ground up to the ceiling of the concert stage box) that I can see the details even from our section. Some were practicing a giant wave in which I participated almost eagerly. Then he came out on stage with the band wearing a blue suit and probably a pair of black jeans. He sang “Hello, Goodbye” (complete list can be found in the Wikipedia page) which had me in LSS for days now. It’s like I was hearing an old song for the first time again. 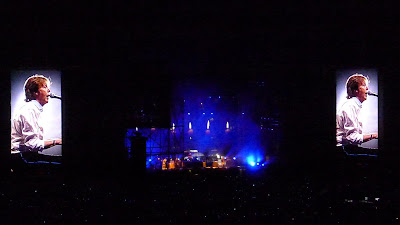 This shows how far I was from the stage

After another song or two, Paul then greeted the crowd in Spanish. He pronounced “Uruguayos” correctly and confessed that he studied the language while he was in grade school. The rest of the spiels were in Spanish but it was written on a paper placed on the floor or somewhere else and he was just reading it admittedly. Of course, the crowd cheered for every sentence he can finish. After two or three more songs, he changed his guitar. I thought it’s for tuning but it’s not and he made this clear by lifting the instrument like a trophy. The second guitar happened to be an electric guitar. Or for the musically ignorant like me, it sounded at least like an electric guitar. He shared that it’s the same one that he has been using since the 60’s. Then the crowd cheered some more. The act started to create a pattern, like changing the guitar from time to time, from ukulele (“Something”, I think, as a tribute to George Harrison) to acoustic guitar (“Two of Us”, my favorite “Blackbird”, “Here Today”, in which he quipped “the conversation I never had” with his “hermano” John, to name a few). And to break the monotony of it all, he played the piano (“The Long and Winding Road” and a whole lot more). His “Live and Let Die” on piano had fireworks on display to the amazement of the roaring crowd. There were two encores just like in other tour stops and it’s satisfying to hear him end the concert with “Golden Slumber” in a medley with two other sleeper songs, pun intended.

For the Roxette concert a year ago, I didn’t finish the very last song as I had to hurry up and get a cab considering that Velodromo is modestly a smaller venue. For “On the Run”, I stayed until the last beat. Never mind that the 28,000 crowd would outrun me to get in the bus or a cab. Speaking of that, I revisited my Plan A which is to get to the nearest bus stop in Olimpica area. Unfortunately, the one in my game plan wasn’t operational because they closed some of the roads for the concert. I ended up following the flow of the concertgoers, assuming that they will lead me to the next bus stop. When I reached an intersection and people were divided, I just walked after those who were turning right. After a few more meters and out of nowhere, there’s a queue of three or four taxis and no one was taking a ride. Talking about being a lucky bastard until the end.

The rest of the pictures here.

P.S. An officemate claims that the stadium on that fateful night was filled with 50,000 people or more.
Posted by Manuel Pangaruy, Jr. at 11:31 PM