Notes from My First (Trip to) “Cinema is Incomplete” 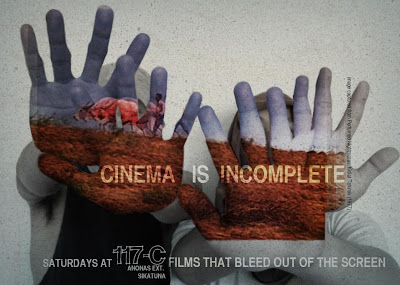 At 2pm on January 14, a Saturday, I was already at the RCBC Plaza to consider catching the one-man play “Defending the Caveman” with Joel Trinidad. Unfortunately, the show starts at 3:30pm and I had no choice but to kill time at the Gateway Mall instead by watching the latest Sherlock Holmes movie at the Platinum Cinema (which is a totally new experience on itself).

My game plan then was to catch the film line-up of Cinema is Incomplete. A lot are already raving about the documentary “Tundong Magiliw” and I missed it in two occasions: first, at the Cinemalaya then to another semi-exclusive screening at Sikatuna Village. It was an epic fail on the second chance as I was already at the gate of the venue when I backed out simply because I can’t confirm whether the screening was a go or not. Anyways, armed with the text message below, at 6pm, off I went to the venue from the mall:

I arrived at 117C Anonas Extension 20 minutes before 7pm. My contact person said that they were still setting up and they might start later than the announced time. I explored the street and I ended up first at Trimona Vegetarian Restaurant which is just in front of the Zombie Lounge. For dinner, I had chicken adobo (so it’s semi-vegetarian after all), brown rice and pandan juice. Really, really good. They also sell some knick-knacks there from CD’s to herbal stuff. It looks like the business is owned by an Indian family.

From there, I walked to the nearby tea shop called Bumble Tea Place where they offer Serenitea-ish drinks like winter melon milk tea, a must try, with jelly or nata. I got another text notifying me that it would take probably an hour more to start the screening. That had me end up getting a foot massage at Azul Spa for only P250.

At 8pm, I finally went to the venue which is more or less the second floor of a house, a well maintained and a very clean one, turned into an art space. I was the first audience. Then I met the people behind the film showing, particularly Jewel Maranan who directed “Tundong Magiliw”. Usually, it’s free but for that event alone, they asked for a fee of P250 which will help fund the students (Jewel included) on their way to a film camp in Berlin (they are probably there as of this writing).

The place could accommodate 20 people. It has some small Zen tables which I mistook at first as chairs. You can order beer and finger food like peanuts and viewing is best enjoyed if you sit on the floor near the wall. People started coming in 10 to 15 minutes later including co-Cinephiles members Nico and Skilty (and I heard, Oggs, too).

Below was their line-up on that Saturday:

Hungkag (Carlo Francisco Manatad) This short film tackles the lives of ordinary people during a not so ordinary night. I guess the idea is to inject fear, particularly on how a peaceful evening can turn into something violent. This is a noir-ish and lighter version of “Amok”, only shorter. I don’t know if that’s really the insight that it wants to partake. I could be wrong. That brings me to my problem with the film. For me, the story is not smoothly told. It’s well directed but it needs to have some ironing out script-wise. Great cast, too. Star-studded for a student film: Jao Mapa, Alwyn Uytingco, Alchris Galura and JM de Guzman (still credited as Juan Miguel de Guzman).

Limang Libo (Ice Idanan) Another short film, it embarks upon the so-called karma between a midwife, her son, a man and his wife who just gave birth. This is what I best like in a short film, to effectively tell a story in a span of minutes. The role may be very tiring for Cherry Pie Picache but she did give her usual best. Strong support, too, from theater actor Paulo Rodriguez. There’s an indie film written by Ricky Lee and directed by Mel Chionglo called “Bente” that theorizes about the life of an average Filipino costing to P20 tops. This short film has the same effect only more powerful and thought provoking.

Tundong Magiliw (Jewel Maranan) It’s a documentary in the purest form possible. It doesn’t mention figures or percentages and no interviews from different sides are seen. I was reminded of Mario Handler's "Aparte" which explores an Uruguayan neighborhood outside the city for a duration of three years. Maranan's film, on the other hand, documents a family living in one of the poor communities in Tondo near Manila Bay. The film opens with the pregnant mother trying to catch a fish then we saw her having a conversation with the kids while waiting for the father. It is pretty much a crusade to show how the day goes by for that family. The highlight of the documentary is when the mother gives birth to her third child. I haven’t seen anything like that before and I won’t be able to forget the images of it for a long time. On top of it all is the anxiety it suggests regarding the future of the newborn. This is indeed the true State of the Nation Address.

Pepe Diokno's "Engkwentro" was originally included in the line-up but "Tundong Magiliw" ended at past 11pm. Since most of the audience already saw it anyway, the film was skipped.
Posted by Manuel Pangaruy, Jr. at 5:04 AM