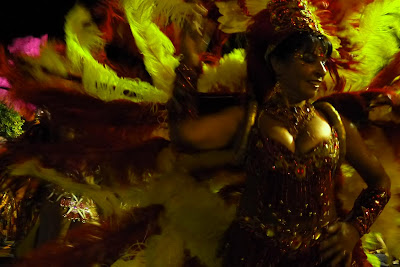 This is my first time to experience summer in Montevideo City. I’ve seen two winters/autumns already but I always miss the sunny season. Part of the agenda when I arrived last mid-January is to check out the rambla (which is probably jampacked with people on their swimwear) and the month-long celebration of the carnaval.

Last January 27, a Friday and on the last minute, we were scouting for a ticket to the carnaval kick-off (or Desfile de Inaugural). The payment center chain Abitab was no longer selling tickets on the day itself so we ended up risking to get a ticket hours before the event. Mike and Carlos went to Avenida 18 de Julio at around 5pm-ish while everybody went home to freshen up and prepare. We agreed to just meet up at the location where our seats are installed.

The opening parade for the carnaval is not that appealing to locals compared to other events. I think I understand why when I finally witnessed my first taste of it. We arrived at the venue at an hour before the given time. The wooden foldable seats are just put there for the event and are numbered with the aid of a tiny white sticker. Our officemate mentioned that we don’t need a seat as the people just find their place anywhere in the area. In our case, a mother with two kids was trying to get hold of one of our seats by negotiating on how everybody can fit in, including them plus 8 from our side. Good thing we have a Spanish-speaking company like Carlos and Ismael. In short, the seats are just there when you get tired of standing up and getting close to the participants. This also means that you have to be very extra careful of your belongings.

After close to an hour, the parade started to roll in. By then, there were already a lot of kids trolling around with some foam spray and some bits and pieces of what looks like a shredded Styrofoam. It’s irritating in some ways as you have to cover the camera lens from time to time and you have to brush your shirt off the small white dots the foam makes. The kids even sprayed on the participants adding a level up to the street party mood. Those with no game face on retaliated with either water or another foam spray. The parade, by the way, was a mix of what to expect during the height of the carnaval. There were some giant floats, candombe bands, those who are participating in the tablados, some bands on wheels and the sponsors.

Some pictures during the parade (the rest, in here): 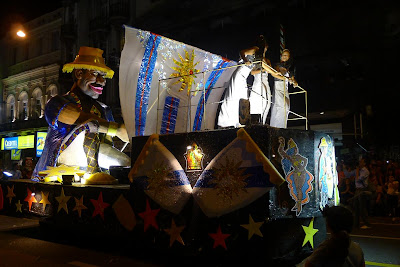 One of the first floats to open the carnaval 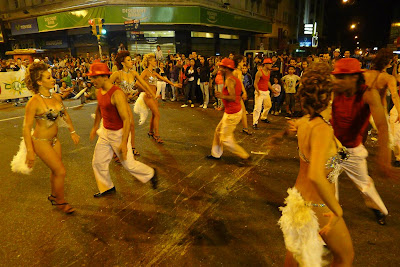 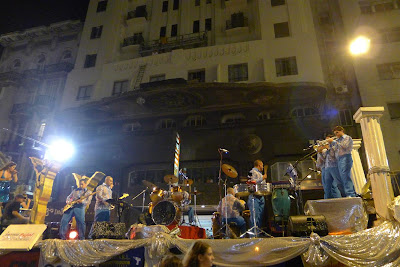 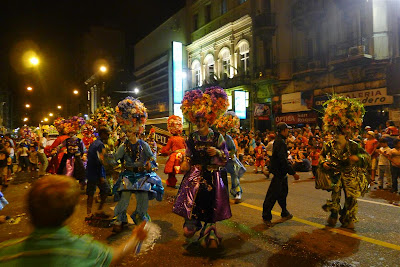 Some participants in colorful costumes 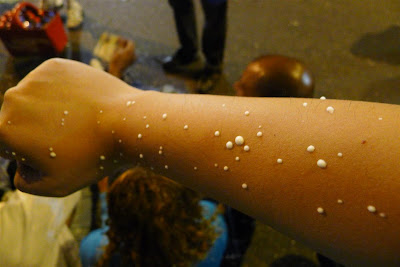 ...And the price to pay, the white spots from foam spray

Almost a week after, on February 2, there’s Yemanjá. It is a day of offering to the Goddess of the Sea. Locals gathered at Playa Ramirez (and probably in other parts, too) to tender some food or other things which are usually put in a small boat painted with white and blue. It was already crowded when Mike and I went there at the beach, around 8pm, to meet up colleagues Margarita, Janet and Maria. There was a small group of women in white who were chanting some kind of a prayer then they rolled on the river bed as if they were possessed. Another ritual looked like a form of blessing from a certain spiritual leader. We left early because it was starting to rain (and ended up enjoying chivitos at Marcos’)
.
The event in pictures (complete set in here): 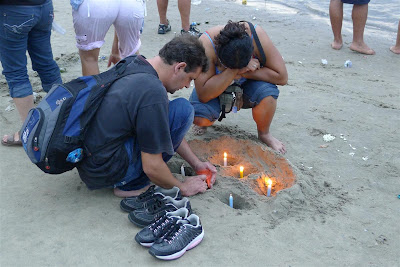 A couple is praying 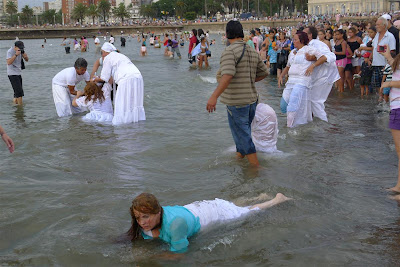 Some ritual for the Sea Goddess 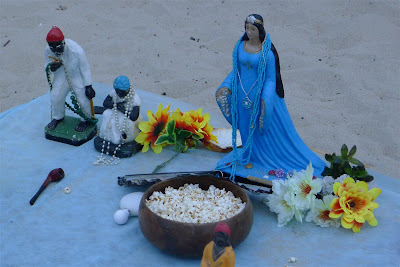 Desfile de Llamadas somewhat closes the carnaval celebration with a bang. This is the colorful parade with some girls in glittery get-up and drums (called candombe); pretty much the carnaval that most people outside Latin America are familiar with. Each set or competing group has a couple of banderistas first, waving some gigantic flags, then an old couple plus a group of dancing women. The last of the group is the vedette that looks like the carnaval queen to me and behind her are the tamboleros. An award is given to the best performer per category. The Rio de Janeiro (or Brazil in general) version is celebrated on the eve of the Lent, specifically on Fat Tuesday or the Tuesday right before Ash Wednesday. In Uruguay, it is days before that. The seating arrangement was the same as the opening night, only more rowdy and touristier. Our tickets cost UYU 175, a few pesos more expensive than the first one but definitely worth it. There were two nights allotted for this, February 9 and 10, where the latter was more of the final round. The parade took place at Isla de Flores in Montevideo. We only finished 13 out of 22 floats as it was 1am already. We just joined the tail end of the band and just copied what the patrons were doing.

Highlights below (and the rest of the pictures, here): 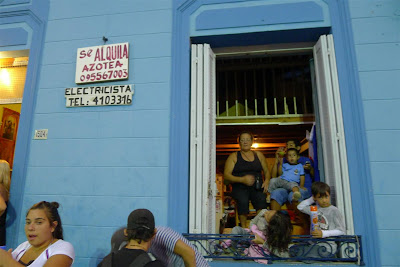 This house is renting their rooftop for viewing 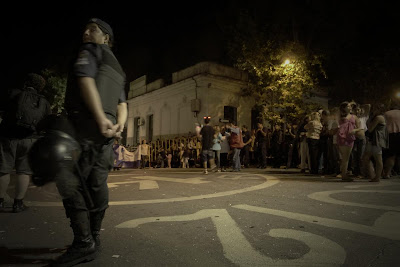 Police on the look out 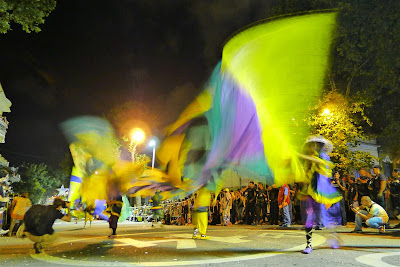 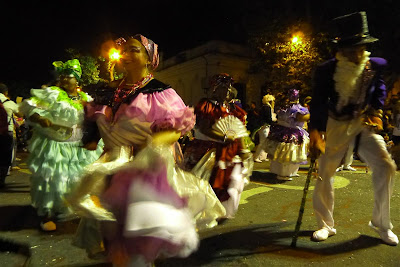 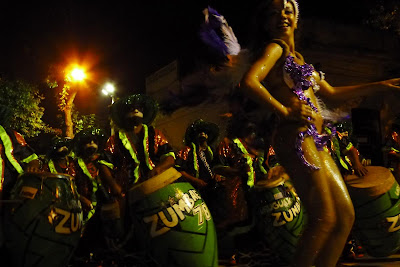 The vedette and her tamboleros 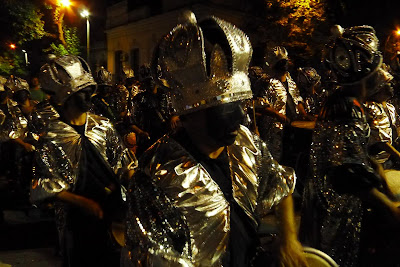 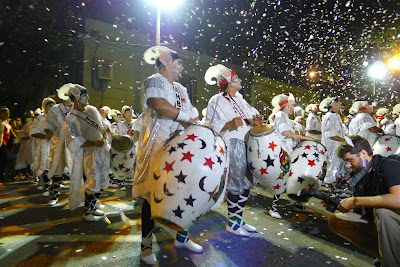 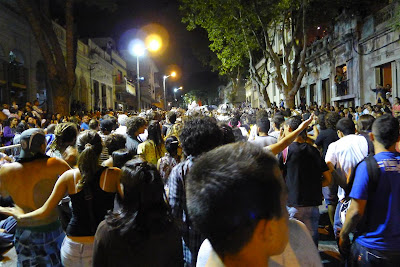 This is the crowd that we followed 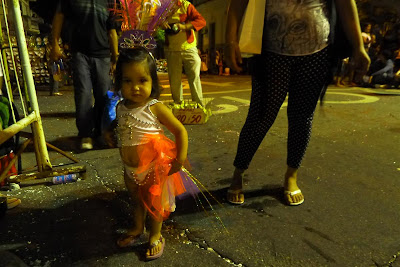 Guess who is next in line now

During the whole carnaval season, there’s the tablados. It’s a series of performances on stage in different locations. Just like the llamadas, this is a competition, too. Each show has various groups in it, categorized as Revista, Parodista or the classic Murga. Based on the performances I’ve seen at the open-air Teatro de Verano last February 13 (last one was supposed to be on the 12th but the original schedule was cancelled due to rain), Parodista is the easiest to distinguish. It’s like a spoof of a certain show and the group (called Nazarenos) even sang a Spanish version of a tune similar to Every Breath You Take and Carmina Burana. Murga and Revista, based on the performances I witnessed from Extasis, Japilong and La Gran Siete, are almost the same except perhaps the latter is less elaborate on the moves and the overall performance. I’ve heard from officemates that Murga groups were given a certain current event issue and from this, they will sing their commentary. The topic, I was informed, is about racism as recently ignited by the Uruguayan soccer player Luis Suárez. All the performances and even the breaks in between were all timed accordingly.

The performers below (and more pictures here): 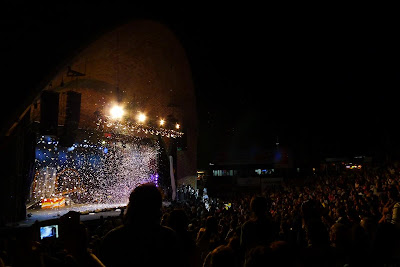 Teatro de Verano after a performance 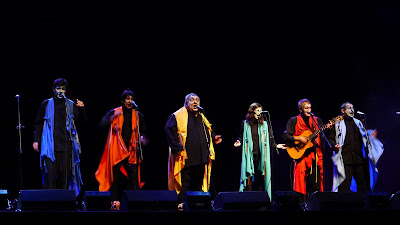 Revista group Extasis during the performance 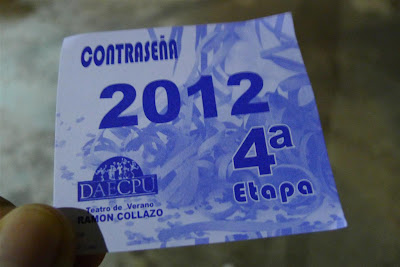 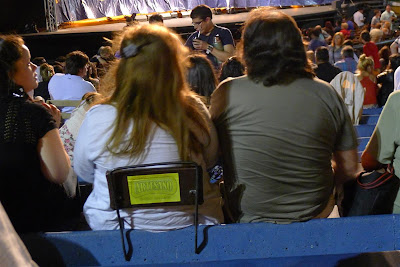 From left to right: gate pass during break and the makeshift back rest 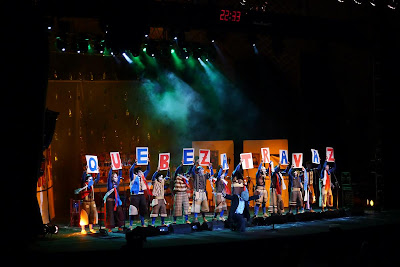 Japilong doing their murga (notice the timer on top) 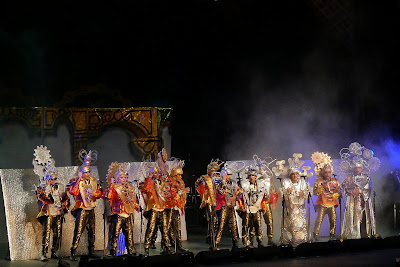 The Parodista group Nazarenos on the first part of their performance 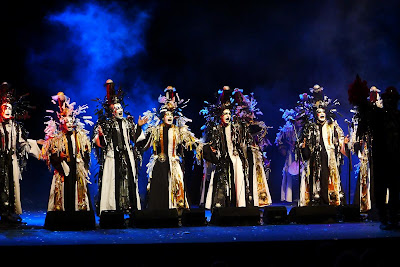 Last but not the least, La Gran Siete on their murga

Some videos here, here and here.
Posted by Manuel Pangaruy, Jr. at 9:39 PM