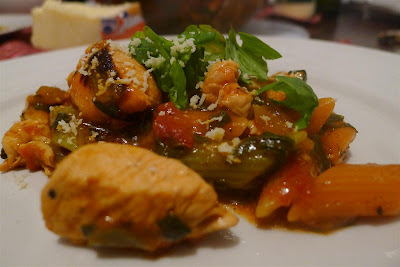 (Chicken dish prepared by Carlos for the Sunday dinner)

It seems like a lot will be traveling on the last week of September and we thought of having some kind of a weeklong dinner feast (and a breakfast) to highlight the not-so-usual event.

Monday: Gardenia. This is my pick. It’s included in the top 5 best restaurants in Montevideo according to Tripadvisor users. I chose the place primarily because of the involvement of the great Uruguayan architect Carlos Ott. He designed the interior of the restaurant. All the food we had were for sharing so I got the chance to try their signature lamb dish (a must-try), French rack and a pasta with stuffing. For dessert, we had crème Brule.

Tuesday: El Italiano. This is Daryl’s pick as he has tried the food there before. It’s a diner located near the yacht club area (it’s actually the only diner in there). This time, we were joined by our officemate Enrique. We had a fresh seafood platter with some veggies in there and, err, French fries.

Wednesday: La Casa Violeta. We were in a hurry when we had our dinner there (I had porterhouse steak) as we were about to catch a gig with Anya at 10pm in the other side of Montevideo. Food is great as well as the ambience. The restaurant is overlooking Rio de la Plata and yes, it’s violet-colored.

Thursday: La Estada. It’s more of a team’s choice than Daryl’s or Jacq’s. Carlos found this asado place in a website and apparently, it’s a meeting place for expat. Aside from the fact that we’ve got company, there’s nothing much to root from the menu. Pretty much the same parrilla stuff.

Friday: Sheraton Hotel. We woke up early on a Friday just to catch an early buffet breakfast at Sheraton. I’ve always wanted to try the restaurant there and this is more of a wish granted. It was Jacq’s last day, by the way, so we thought of eating out with a bang. The selection is awesome, something that you would like to see in a grand Continental hotel breakfast: freshly baked bread, fruit juices, different hams and an as-you-like-it omelet. There was also a send-off lunch at Montevideo Rowing Club for Jacq with the bosses around. I shared a plate of ñoquis with Jacq.

Saturday: Estancia del Puerto. It’s our nth time with this Mercado del Puerto favorite. We had the usual: morcilla dulce, asado, chorizo, sweet bread and the like. For dessert, we tried the strawberry in whipped cream sprinkled with sugar.

Sunday: Porto Vanila. Not really a part of the dinner marathon but I just would like to include something for Sunday. Daryl and I went there after a two-hour afternoon walk along the rambla. I had a lemon cake and café cortado. For dinner, we enjoyed a tomato-based chicken dish prepared by Carlos.

Monday: Francis Restaurante. Francis has always been a favorite for us. Expensive but pretty much worth the price. We were joined this time by Nestor and Carlos. For appetizer, we had sushi (one of it is lamb sushi). I played safe with my main course: the fish trio. I was supposed to pack most of my stuff but the wine (from Argentina) crawled a bit.

Tuesday: La Otra. I was the last man standing for this dinner, representing the rest of the Manila Mafia. We just ordered the usual: morcilla dulce, asado and some salad. My mind was already on the packing I needed to do after the dinner but it’s good to see two-time Oscar winner Gustavo Santaolalla, an Argentinean, in person.

The rest of the pictures here. Plus an out-of-the-blue leisure walk along rambla on a Sunday afternoon here.
Posted by Manuel Pangaruy, Jr. at 4:56 AM