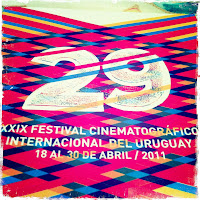 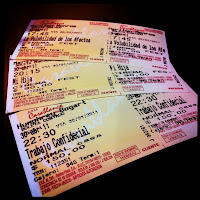 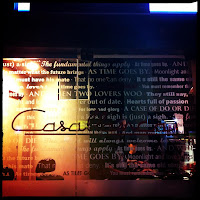 The film festival ran from April 18 to 30. It started during the Holy Week and I wasn’t around the time it kicked off. I actually didn’t notice (read: language barrier) that there was an upcoming “big event” prior to my out-of-the-country trip. Thankfully, there are some officemates who find time to remind us of the events that we need to attend to (like the Candombe parade, the agricultural fair in Prado, etc.).

Compared to Montevideo Film Festival last year, this one’s has more edge to say that it’s really a film festival. Numerous films across the continents participated, including one from Malaysia (Charlotte Lim’s “My Daughter) and the Cannes-winning film “Uncle Boonmee Who Can Recall His Past Lives”. Films, just like in other international film fests, were categorized accordingly. Some were for competition for “Largometrajes de Ficcion” (feature length) and “Ibero-Americanos” (films within the Latin American region and other countries like Spain and Portugal). Some were for shorts or even documentaries. They also had Jeonju Digital Project (which included our very own Lav Diaz’ “Butterflies Have No Memories”). Two screenings of Fritz Lang’s “Metropolis” were held, accompanied by a live piano music from Stephan Graf von Bothmer. I missed this special event due to schedule conflicts but I sneaked in for a few minutes just to experience how they do it here.

The screenings were held at Cinemateca cinemas which are scattered in most key places here in Montevideo. Biggest of all is probably Cinemateca 18 which is just along 18 de Julio St. (their Ayala Avenue). It's a downtown cinema (meaning outside the mall or a complex) and it had me reminisce the good old days of watching movies in Lopez, Quezon. Seats are not of Greenbelt quality and even the toilets are not well maintained but I liked its charm. There's also Sala Cinemateca just four or five blocks away from Cinemateca 18 (not good for marathons); a bit smaller but has the same appeal. These are good cinemas but I watched most of the films at Casablanca primarily because it's the nearest from my place.

Based on the catalog (they sell it for UYU 70 or roughly PHP 150), they exhibited more than a hundred films. It should have been an overwhelming event for me but since Uruguay is a Spanish-speaking country, all subs were in Spanish. What I did was check out those that are in English and those that I think will not be that talky (I did watch three of it and survived!).

In case you’re interested to participate next year, here’s a link to their vision and an entry form can be found from this site. Just a note though for Filipino filmmakers and producers, I don’t see much “kababayans” here compared to, say, Brussels or Belfast. I am not sure if you can gather much Pinoys here to support your film. As for the case of the Malaysian film I’ve viewed, the cinema was more than half full (which is a good thing) and I was the only Asian.

As for eight films I had the chance to see:

I was asked before not to cross-reference a film but I can’t help but compare this to Ray Gibraltar’s “Brod” (the titles are even close). A neo-Nazi group recruits and trains people for a mission. It works like a fraternity (like in “Brod”), headed by some leaders, and executes some tasks that hurt other townsfolk. Lars, a newbie whose skills and determination get the attention of one of the leaders, is assigned to stay with Jimmy in a house by the sea and remote from the rest of the town. There they get acquainted, to a point that they start to develop affection for each other. Predictably, things become complicated when everything is poured into open. Tales like this could not be very fresh but I like the way it was made. It never becomes romantic or poetic; the lighting is a bit dark while most tight shots do not pretend to be something else. Maybe it is trying to mock those ultra-masculine groups and it succeeded for me. Or maybe it is just wishing for attention by trying to be controversial. Whatever that is, I would always appreciate its lingering last frame and a very competent acting from the whole cast. The film, by the way, is from Denmark and I couldn’t understand a word (Spanish subs, too) but the visuals helped.

This film gives Paul Giamatti his first Golden Globe best actor award in a musical/comedy. As I see it, its main attempt is to come up with a film bio-like storytelling as it focuses on the ups and downs of rich mogul Barney Panofsky. It’s a cute idea. Mr. Giamatti who is definitely not a Brad Pitt plays a colorful character that pinpoints the tail of womanizing as something inherent to every Adam. He’s fun to watch, especially when surrounded by gorgeous ladies like Rosamund Pike and Minnie Driver (who both shine in this movie) but he is at his peak in the usual depressed and quiet moments. From film bio-ish, it swings occasionally to dry humor and makes a U-turn in the last few minutes. I can say that the film is probably conceptualized with Mr. Giamatti in mind but I am not complaining. Paul Giamatti is Paul Giamatti. 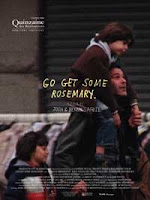 Third film on my line-up is indie as indie you can get. It tells a city tale of a single dad named Lenny who tries his best juggling meager work and being a parent to two kids aged 9 and 7. The first thing that got my attention is the main character’s name. Very unisex; it says something to me about the dad and mom roles a single parent should take responsibility to. And it doesn’t look easy for Lenny. Not as cool as the opening sequence where he tries to cross a fence and fail, losing the hotdog sandwich and laughing at what had just happened. Backdrop is New York City with a Dave Eggers-like script, the film seems dreamy at times (especially the last part) and bittersweet in between. 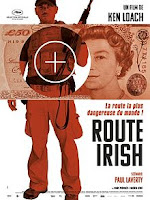 I think I’ve seen only two or three Ken Loach films before (including the Cannes-winning film “The Wind that Shakes the Barley”) and my impression is that he loves to tackle socio-political issues (he took up Law, Google says). His latest film talks about the Iraq war, the violence it creates both from outside and behind the enemy line. It’s a war film but it doesn’t show much of the actual war but its persisting aftermath. The storyline could actually pass for a Hollywood action movie but it’s stuck to its vision in giving awareness of the oppression that our military men have to carry on. I wasn’t moved by the film but the filmmaker’s familiarity of the topic is loud and clear.

This one’s another indie film from the US, something that we normally categorize as an “art film”. It’s about a group of people who’s shooting a film in what looks like a vacation house. There’s no obvious plot in there and no characterization business whatsoever, just a bunch of film production crew doing their thing and sometimes swimming at the pool (which I like because of the shot being creative and its abstraction). Sequences are long and most of the time, nothing is happening (reminiscent of sequences of our very own Lav Diaz). It’s also unfeeling. The love scene that is being shot is not mindful of the crew and the cinema audience. Nipples here and there and some genitalia, careless of what the body parts may mean for the lovers in the set. The only time it provides an emotion is on the last frame just before rolling the end credits.

Among the low budgeted indies I’ve seen during the film festival, this one is the most reachable. It is about Doug, a college drop-out who returns home and be reunited with his sister Gail. First part establishes the relationship between the siblings and Doug to his new officemate and his ex-girlfriend. Second chunk is different as it travails to a crime solving route that looks like an adaptation of a teenage novel, complete with a reference to Sherlock Holmes. Direction is impressive. It lives up to its film title through its shots from that part of Oregon. The minus side for me is the second part that looks ridiculous at times. After the subplot about the missing ex-girlfriend surfaces, every clue pointing to the answer seems to be strangely and conveniently popping out. I thought it was all a joke, like the sister will unplug the surprise and admit that everything’s a farce. But it didn’t. It was really serious with the mystery part. The saving grace for me is the ending that seems to be pointing back to what I appreciate most in the movie.

My second film on the list that is non-English is from Belgium (and Netherlands) I think. It’s a coming of age tale about Gunther Strobbe who grew up in the company of drunkard dad and uncles. One incident in the family changes the life direction of the kid which serves either as an eternal burden or a freeing opportunity. Aside from the very well-acted cast, it boasts of a pretty neat direction and a script that is both simple and genuine. The material may not be new but it still hits the spot (at least for me). I can say that this is my favorite among the films that I’ve seen from the festival.

The film, as I expected, is not talky but in the only scenes where dialog is needed, it got me lost a bit. It’s a mother and daughter tale on love between the two women and the factors that try to invade and ruin it. It is very quiet and the visuals make it a point to storm the emotions hiding in both the mother and the teenager daughter (both are really good actors). It’s also slow as per Hollywood (or even Asian melodrama standards) and I’m sure this is something that the international audience would really love. It’s also Hubert Bals-funded so expect a little something.
Posted by Manuel Pangaruy, Jr. at 6:57 AM