How the Uruguayan Women Rock Their Jewelry 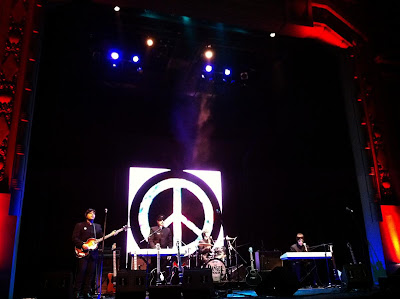 One of the attractions here that I always look forward on our everyday taxi trip to the office is the walls along Avenida Paraguay. They are always packed with posters of upcoming events fuelled with hope that The Script or Lady Gaga, at least, to pay a visit here. That’s where I first saw an Andy Warhol-inspired ad of Danger Four who had a stint at Sala Zitarrosa in Avenida 18 de Julio. I caught their first gig out of the four-night event.

Danger Four is, according to an officemate, the best Beatles tribute band here in Uruguay. I don’t know how many copycats they keep but four gigs mean a lot here especially for a band that plays non-Spanish/Latino songs. But, yeah, it’s the Fab Four. I didn’t even research about the band. I just wanted to hear some Lennon or McCartney being performed live and that’s all I needed. The other come-on, according to the same officemate, is that the band purchased (and now, using) some instruments that were once owned by the Beatles themselves (he thought it’s the bass guitar but not very sure).

Sala Zitarrosa isn’t a big venue but it’s not Saguijo little either. The capacity could be comparable to Music Museum and seeing it full house with fellow Beatlemaniacs was a good indication that I was in for a ride. Entrance ticket is UYU 340 (PHP 770) with a cheaper alternative at the balcony for roughly UYU 100 less. It was reserved seating (I got the leftmost spot in the middle of the fourth row) and no drinks were sold.

The band is composed of Beto Fregosi (Paul McCartney), Coco Boudakian (George Harrison), Camilo Celi Nuñez (John Lennon and the object of sexy headbanging from the pretty teenage girl in front of me) and Lucas Fiorentino (Ringo Star); all representing different age brackets. For instance, their George Harrison looks like their Paul McCartney’s dad who, in turn, happens to look like their John Lennon’s dad. They opened the show, all in their 60’s combo uniform, with “Eight Days a Week” and immediately followed with “I Want to Hold Your Hand”. Prior to that, a cool animation was projected on an ASAP Rocks-like video wall while “A Hard Day’s Night” was being played as an overture.

Name a popular Beatles song you know and it’s probably included in the repertoire. I missed hearing “Blackbird” or “Two of Us” but their list of songs was serviceable enough. To my surprise, the mixed crowd partied big time during “Ob-La-Di, Ob-La-Da” and “Twist and Shout”. I was relieved to know that women here know how to rock their jewelry.

The gig lasted for around two hours. They sold CDs for UYU 200 each with (surprise, surprise) covers of Beatles songs. Some even asked for autographs or pictures; proof that they already have a healthy fan base here.

It probably rained during the gig. The streets were all damp.
Posted by Manuel Pangaruy, Jr. at 8:14 AM