I have yet to come up with an impression on what's a typical Uruguayan film. Below is just a list of local films that I have seen so far through DVD rental. Sure, most are socio-economic commentaries, something that is very distinct in third world countries, but I still can't generalize. Maybe the absence of much cinematic identity is triggered by the fact that the country is sandwiched by two enormous nations, namely Argentina and Brazil, and perhaps it's a struggle to have its own voice. Anyway, the line-up is more of international film festival-decorated so I have to check next their more mainstream ones.

Cesar Charlone and Enrique Fernandez’ El Baño del Papa (2007) – The film is a commentary on how religion affects the society. It’s about how fanaticism overlaps with faith and vice versa. In focus is a small and poor neighborhood in Melo, Uruguay, which is just near the Brazilian border. The poor townsfolk invest on an upcoming papal visit by selling their properties just to come up with business for the greeters and cheerers. Beto, the lead character, on the other hand, tries to earn a living by smuggling goods through border crossings using a bike. His business is going to be a toilet rental for the papal supporters (hence the title). Aside from that, he has family issues on his own to address. I can say that aside from the social commentary that overpowers the film, it is very visually affecting. The hue is maintained from Scene One up to the end and the editing makes it viewable even for the mainstream audience. I guess it has something to do with the theme that could be taken as depressing at some point. It is also a family drama where internal issues are more important than the morals or socio-economic condition. It’s a good introduction for me to Uruguayan cinema. 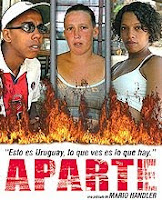 Mario Handler’s Aparte (2002) – It is categorically a documentary. Shot with no script whatsoever, catching a glimpse of interconnecting stories of the people from a poor neighborhood right outside the city center of Montevideo. Opposed to what is expected from a documentary, the film does not share any figures or statistics and even details like its geography and their economic state. It’s just the real-life stories but not to a point that you feel like watching clips from the Big Brother franchise. The end credits mention that Mario Handler captured the series of everyday lives for a certain period (if I’m not mistaken, it’s more than a year). At times, the actors involved are caught looking at the camera and at times, it’s the actors themselves who are helming the scene. The challenge that I see with this kind of approach is on the editing department. To be specific, the director opted to film real people’s stories but along with being real is the absence of storytelling arch. Let’s just say that it’s not every day that an interesting event comes along. Having said this obstacle, the final product still feels like wanting for more, like we don’t know what is in store for the videotaped characters, but it succeeds in letting its audience take a peek into a truth from a different angle. The film reminds me of John Torres’ works, sans the poetry.

Adrian Biniez’ Gigante (2009) – This Hubert Bals funded film (read: some of Raya Martin’s works) tells the story of stocky (hence the title) security guard named Jara who works in a supermarket during night shift. It looks like an uneventful life for him until he meets one of the female workers through a CCTV camera. Jara starts to check the girl’s whereabouts and establishes a connection from afar. Compared to the first two Uruguayan films that I have watched, this one is quiet and always finds time to exhale when needed. The topic on spotlight is also less complex but it provides input to macro economics, recession and oppression. Not to mention that out of its simplicity, it also contributes some outstanding scenes. One of it, my favorite, is a sequence where Jara follows the guy whom the girl just dated. It preempts a tension that Jara might hurt the guy but upon reaching the apartment, two street jerks appeared and do the mugging themselves. Jara and the guy ended up having coffee in a bar talking about the girl’s favorite rock band.

Federico Veiroj’s Acne (2008) – This coming of age is similar to the storytelling approach of “Gigante”: quiet and mature. It’s about a pimply teenager named Rafa who is having a race with his hormones. At 13, he affords to render money just for sex with their house help, prostitutes, etc. He came from a rich dysfunctional family, by the way. His parents are on the verge of a divorce and it is actually his brother who arranges the sex with the house help. Aside from his pimples, where he always makes it a point to be attended by a dermatologist or by himself using some skin care products, the other thing that he worries about is having his first kiss. Unfortunately, the girls he fucked avoid that part on their make-outs. The storyline could very well pass for a Hollywood teen flick (Rafa, for instance, is joined by his friends who are equally passing through their own manhood a la “American Pie” and the like) but the film opted to a take a less travelled route. Editing and music are not in a hurry and the sweet resolution in the end just landed on the right lap. Alejandro Tocar as the low self-esteemed Rafa holds the film as his own. He shines in all of his scenes and he’s probably an actor to watch out for. 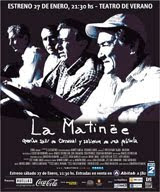 Sebastian Bednarik’s La Matinee (2007) – The documentary chronicles the rise of a carnaval band composed of veterans who are trying to fit in a society that is prone to favor the younger generation. I am not sure how Fat Tuesday is celebrated specifically here in Uruguay, but it looks like a series of auditions are held first before a set of bands are chosen to perform on the pre-Holy Week merriment. The film starts with the introduction of the members and how its musical director, a young local who adores Murga (a traditional form of carnaval music), tries to gather the band. Next in line is the audition part where they made it as one of the runners-up. What follows is the group’s journey to performances here and there and having a fan base of their own little way. If there’s one thing that I like the most about the documentary is that it doesn’t opt to sentimentalize things. Yes, the band is composed mainly of men on their senior year but they seem to just go on and entertain people. Maybe it has something to do with the nature of the carnaval that even with saggy tired faces, everything can be covered by a make-up or a mask. It’s good to note, too, that just like in the Philippines, musicians here end up either poor or overlooked. One portion of the documentary details how the members cope in life with their menial jobs.

Juan Pablo Rebella and Pablo Stoll’s Whisky (2004) – This FIPRESCI prize winner in the un certain regard category at the Cannes Film Fest is so far the most appealing to me among those that I have seen. The plot is very minimal. It’s about middle-aged Jacobo who tries to put up a facade to his long-lost brother Herman who comes over to Montevideo for a commemoration of their dead mother. One of the impressions that he has to build is that he’s a happily married man. To do this, he “hires” his clothing factory’s most trusted employee Marta. What transpires next is a vignette of events of pretension, patching up and moving on as if an ordinary day just passes by. Given the fact that the material only has three major characters, the script does not sway on being stagey or with too many conversations. To make a point, for instance, of how mechanical life Jacobo is having in running his clothing business, it shows some repetitive scenes like he goes for a coffee first, then drives to the warehouse and opens it, operates the machine, checks the air conditioner and asks Marta about the guy who will fix the blinds. The pattern makes a U-turn as Herman breaks in the scene. Jacobo, by the way, has an issue with his brother for choosing to be away and to have his own business and family in Brazil. There are a lot of quiet moments that are worth applauding including a killer last frame that made me clap on my lonesome watching the film. To emphasize further, whisky is the term they use to replace “cheese” in the phrase “Say “cheese!” when taking a picture. It is used in one sequence where Jacobo and Marta have to have their “wedding” photo taken as a proof. It somewhat encapsulates the covering up that is happening within.
Posted by Manuel Pangaruy, Jr. at 6:33 AM