Dia del Patrimonio is Not Related to Alvin 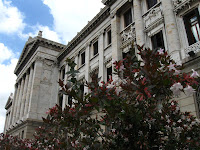 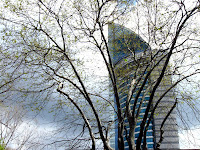 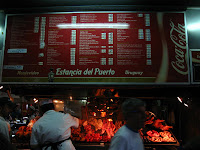 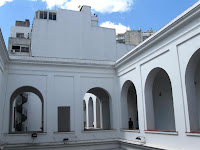 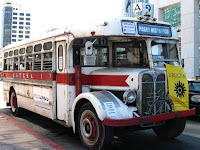 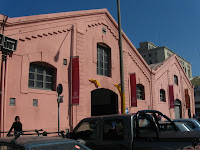 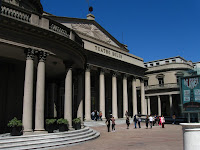 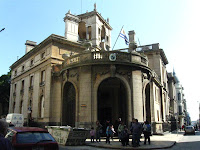 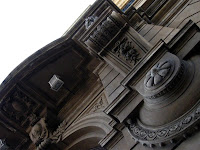 Last weekend was one of the best weekends for me here in Montevideo. I got to do the things I love to do on a clear day. To be precise, that’s walking along the streets, visiting some interesting places while cam-whoring on the side (with my little red backpack, of course). Uruguay just held its Dia del Patrimonio, or Heritage Day, and everything fell into the right place. Entrance fees are waived and most historical buildings that are accessible only on weekdays are open to the public. Lots of tourists, be it local or otherwise, were everywhere (making me, or Asians in general, slightly expected).

Held every last weekend of September, the two-day event is Uruguayans’ way of respecting the past and reminding people of what valuable their history is. All the museums and other old buildings are open to the public for free from 11am to 4pm-ish (others close an hour later), complete with flyers about the significance of the place and occasionally guided by some ushers. There are also street performances here and there, particularly in Ciudad Vieja (“old city”) area so the mood was festive enough for me to kill the weekend.

Anyway, below are the places I’ve visited courtesy of Dia del Patrimonio. I haven’t seen a lot of blog entries containing an itinerary about the event but hopefully the list would help.

1. Palacio Legislativo – As the name suggests, the historical edifice is their sort of parliament building where both the senate and congress are housed. It was probably built during the dawn of 20th century, and it’s a fine example of neoclassical architecture (just like our Manila Post Office Building in Lawton). We went there at around 11am by cab. It’s in the center of a roundabout and it’s roughly ten blocks away from Avenida 18 de Julio. A lot of visitors were already present when we went there but not too crowded;

2. Antel Complejo Torre de las Telecomunicaciones – Just two or three blocks away from Palacio Legislativo, this tower, privately owned by Antel (closest in the Philippines could be PLDT/Smart), is the tallest building in the whole Uruguay. Since most buildings in Montevideo are not that high, this one is easy to locate (in the same manner that you see Eiffel Tower in Paris). Designed by architect Carlos Ott, you won’t miss the similarity with Burj Al Arab. I am not sure if it has something to do with the time the architect did designs for some buildings in Dubai or it is just plain coincidence. The main attraction in the complex is the building’s panoramic area on the 26th floor. Staffs are very friendly and one of them even bothered to describe the city landmarks in English;

More pictures of the complex here.

3. Ciudad Vieja – From the bus stop beside Antel building, a lot of busses are heading to the old city. One of it is a special bus designated only for Dia del Patrimonio. It was already past 1pm when we reached the port area and nothing beats a hearty late lunch at Estancia del Puerto at Mercado del Puerto. After a plate of asado and morcilla, we headed to three more museums namely Museo del Carnaval (just beside the market), Museo de Arte Precolombino y Indigena and Palacio Taranco (both along Calle 25 de Mayo). We reached Teatro Solis at five minutes past 4pm and right in front of us were the ushers closing the entrance doors;

4. Teatro Solis – The next day, right after mass at Catedral Anglicana dela Santisima Trinidad (which is also open for Dia del Patrimonio), I headed to Teatro Solis. It’s another neoclassical architecture and it’s a cultural center, much like of our CCP, with an astounding performance hall;

5. Plaza Matriz – From Teatro Solis, I just walked along Calle Sarandi to browse through the items in the stalls along the street. Before having a short rest in one of the benches at Plaza Matriz, I visited Cabildo de Montevideo which is a perfect heritage of the colonial times. There was also a makeshift performance stage nearby where I witnessed a chorale, a one-act play and some flamenco. Just a few meters walk, there’s the CUTCSA Office which was converted into a museum and Centro Experimental de Formaccion which houses some impressive sculptures (some of it were under construction); and

6. Equipo Recopilador Historico del Transporte – To cap the day, I had a cozy trip on a vintage bus. Fare is UYU 17, one way, and it has stops at Puerto de Montevideo, the Antel Complejo Torre de las Telecomunicaciones, Estacion Central then back to Teatro Solis. It was a great experience and most tourists always find time to take a picture of the bus every time we pass by.

Off-topic, below are the photo albums that I haven't posted here yet so:

1. My fifth week in Montevideo here;
2. An exciting futbol match here;
3. Our favorite after gym dinner spot here;
4. Mike's awesome birthday dinner at La Vaca here; and
5. Pictures of the best Japanese restaurant in Montevideo here;
Posted by Manuel Pangaruy, Jr. at 7:20 AM