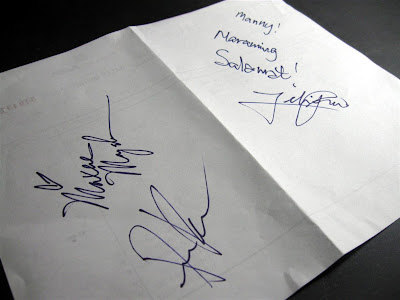 Accomplished last June 20, Sunday, before the premiere screening of Sean Lim's "Pendong" in Cinema 6 at SM Mall of Asia.

Twins Dominic and Felix are Bembol Roco's kids who are trying to make names of their own in the industry. Dominic is currently doing projects for GMA7 while Felix is part of ABS-CBN's "Rosalka" and the lead star of the film "Engkwentro". Maxene Magalona, on the other hand, is the daughter of the late Master Rapper Francis Magalona. She's bound to debut at Cinemalaya this year through the film "Rekrut".
Posted by Manuel Pangaruy, Jr. at 6:58 PM