An Evening of (Good) Pop Music 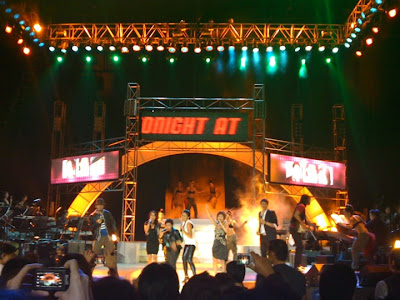 There are those instances that you give in to guilty pleasures. This concert is, on personal note, one of them. I have been a follower of this little segment in ASAP called Sessionistas which features a mix of different music genres: MYMP, Duncan Ramos, Sitti, Nina, Richard Poon and Aiza Seguerra. Never mind their titles such as “Bossa Nova Queen”, “Asian Acoustic Sensation” and “Soul Siren” but I oddly enjoy their act.

So, last night, Sessionistas invaded Araneta Coliseum through a three-hour concert that was close to a jampack. It was an evening spent with pulsating pop covers and each artist was given a space to showcase their craft. It started with two numbers wherein the performers all shared the stage followed by three songs each from Richard then Aiza then another number from the group. Same sequence followed with Sitti and Duncan then MYMP and Nina then the group reunited again to cap the show.

I can’t remember all the songs but on top of my head, here’s what my memory can serve: Ne-yo’s “Miss Independent” sung by Duncan complete with a dance choreography, Sitti doing a hardcore samba song which made me awestruck for three minutes, Aiza’s fiery rendition of Eraserheads’ “Ang Huling El Bimbo” with a little help from a violin solo and Mike Villegas, MYMP singing an Alanis Morisette song and Paramore’s “That’s What You Get” (a surprise for me), Richard doing “Laklak” in a throaty rock star manner and Nina’s take on Lady Gaga’s “Poker Face” accompanied by acoustic piano.

They also did “production numbers” like the girls (excluding Aiza) doing (and wearing) another Lady Gaga song, “Just Dance”. Aiza, Richard and Chin of MYMP, on the other hand, did Itchyworms’ “Beer” to my delight. A surprise number came up when Gary V joined them on stage to do a beautiful rendition of “Di Bale Na Lang” and “’Wag Mo Na Sanang Isipin”. This time, Sessionistas were now playing a musical instrument each (i.e. Richard as a guitarist, Duncan and Aiza on percussions, etc.). But the surprise of all surprises came in the middle of OPM duets act. Aiza asked the music to stop and called on a guy that eventually proposed to his future wife. This was abruptly followed by Richard and Nina’s version of an old ditty “Hagkan”. The major gig ended with a medley of Michael Jackson songs.

I just realized after the concert that talents like Sessionistas should bar us from watching singing contests on TV. The experience was like watching a show done by different artists doing different themes. It was so good that you would even think they were competing. It’s just that they don’t need to be booted out because everybody was good on their own right.
Posted by Manuel Pangaruy, Jr. at 12:36 AM