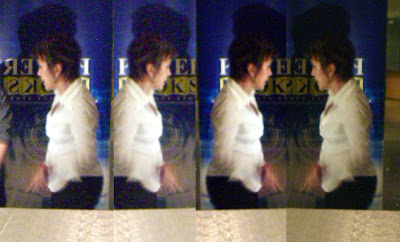 Beware! Astrology calls it “Mercury Retrograde” and this will last for 77 days (one article mentions that it will end on January 30 next year). Here’s a dose from www.astrologycom.com:

A planet is described as retrograde when it appears to be moving backwards through the zodiac. According to modern science, this traditional concept arises in the illusory planetary motion created by the orbital rotation of the earth, with relation to other planets in our solar system. Planets are never actually retrograde or stationary, they just seem that way, due to this cosmic shadow-play.

In general, Mercury rules thinking and perception, processing and disseminating information and all means of communication, commerce, education and transportation. By extension, Mercury rules people who work in these areas, especially people who work with their minds or their wits: writers and orators, commentators and critics, gossips and spin doctors, teachers, travellers, tricksters and thieves.

Mercury retrograde gives rise to personal misunderstandings; flawed, disrupted, or delayed communications, negotiations and trade; glitches and breakdowns with phones, computers, cars, buses, and trains. And all of these problems usually arise because some crucial piece of information, or component, has gone astray, or awry.

It is therefore not wise to make important decisions while Mercury is retrograde, since it is very likely that these decisions will be clouded by misinformation, poor communication and careless thinking. Mercury is all about mental clarity and the power of the mind, so when Mercury is retrograde, these intellectual characteristics tend to be less acute than usual, as the critical faculties are dimmed. Make sure you pay attention to the small print!

I’ve checked how my weekend fared, validating if all these chaos already hit me. Well, last Friday, I was about to meet a friend who has my copy of Jessica Hagedorn’s “Dogeaters”. My book (and my friend) was nowhere to be found and I received no text whatsoever. I hurried to RCBC Plaza to catch the book signing and poured my heart out to poor Miss Hagedorn. She put something on the newly purchased book (a whopping P699 for a copy of “Dream Jungle”) that salvaged the day. With her signature, she asked my friend for being late with three “?’s”. I quipped with “That’s the coolest signature I’ve got”. She confirmed smilingly. “I know.”

Then came Saturday. One major blow came in the morning: a brink of separation (yes, I am/was connected and nobody noticed it, bwahahaha). I survived the morning with hope and denial. I caught Tanghalang Pilipino’s “Insiang” at 3pm and it was good. Really. I like the set, the acting, and the adaptation. Brocka should have seen this production. On my way back to my place, depression knocked me big time. I was really in denial. I wasn’t that strong. Then at 8pm, my friends and I watched the local staging of Hagedorn’s “Dogeaters”. It was fun for many reasons: I got Lea Salonga’s signature segued by an attempt to small talk right before the play began, the production is one of Pinoy theater’s shining moments, P400-worth balcony seat was worth it and I was at my best when I approached Miss Hagedorn for another signature. The day was punctuated with a cold, rainy evening with me burping with SMB Light.

Sunday was the worst (and hopefully the peak). After catching “Beowulf” at IMAX, which was a total experience on its own, and a poetic sunset at the bay, a misunderstanding ensued. Maybe it was I trying to cope. Or maybe not. Or it must be the sunset and the sadness it brings to any observer. Behind the darkened horizon, an epiphany just unfolded. Yes, I will be free. Thanks to Mercury.
Posted by Manuel Pangaruy, Jr. at 10:01 AM