All You Need to Know About Mt. Pinatubo (You’ll be Reading it from this Blog Entry) 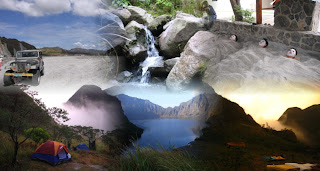 CHAPTER I: Manila to Tarlac

Since we reached Mt. Pinatubo all by public transpo, the details mentioned here will be inclined to that. First thing to do is to go to Capas, Tarlac. From Metro Manila, you can choose any bus heading to Lingayen, Dagupan or Baguio. It doesn’t matter much if it is via Concepcion or Mabalacat. We chose Victory Liner which has a station in Cubao along EDSA. You have two options there: a bus heading to Dagupan/Lingayen or to Pangasinan (Alaminos, I think). Both routes include a stop in Capas. This also means that you don’t have to wait for another 30 minutes in case you miss the bus for Route 1. Through a 6am ride, we reached Capas, our first destination, in roughly two hours. The bus stop, by the way, is not yet in the town proper. I was informed that it is called “Sto. Domingo” but you can refer to it as “junction”. There’s a big Caltex gas station there surrounded by KFC, Chowking, Mc Donalds and some carinderia (including a 24-hour resto called, err, Junction Panciteria, that serves bulalo and other Pinoy ulam).

Sta. Juliana Tourism Council, by the way, serves as your gateway to Mt. Pinatubo. This is the final stop for public transpos and this is where your 4x4 ride begins, as segued by some friendly military check-points. The center is where you have to log in (for tracking and security), log out, pimp a guide and pay for Conservation Fee.

From the Region 3 brochure that I got from the Hotair Balloon Fest, you may contact Manong Jude (0920-8035647) or Manong Edwin (0910-7227575) to rent a 4x4 (from Sta. Juliana to the starting point of your trek). The brochure also mentions that you can take a jeep over 4x4 but it will take an additional two hours of your trek time (not to mention that it’s less appealing for photo-ops, hehehe). Now, you have other possibilities on where you wish to be picked up by 4x4. For Manong Jude, you’ll be met at Brgy. Patling (right before Brgy. Sta. Juliana). For Manong Edwin, he has an option of having you picked up at Dau (this one’s more expensive but more convenient).

You can also rent a 4x4 right in the tourism council or from Mr. Pinatubo Spa Town (they have a P1,500-priced package that includes a day trip to the crater and a buffet lunch).

Tip: the 4x4 can accommodate a maximum of seven trekkers. But that’s jampacked. Six persons is the ideal capacity. Here’s the deal: the 4x4 is being rented on one price only so you have to divide the cost depending on how many trekkers are joining. The guide is normally hitched at the back of the vehicle so you don’t need to consider that for space.

For the nth time, you have two options: the 2-hour trek or the 45-minute trek. The former is the “normal” trek. You have a nice view and of course, the fun. This was the trek we preferred and on our personal note, we took 2 hours and 30 minutes from where the 4x4 stopped up to the crater. The latter passes through a tollgate that the Koreans (same owners of the spa center) had made for its clients. If you didn’t get your 4x4 from Mt. Pinatubo Spa Town, you have to pay up an additional P500 just to get through. We were informed by our guide that you can outwit the toll by sneaking through early in the morning (where the tollgate person is not around yet).

The trek is easy. It’s flat except for the 40-degree 5-minute hike near the crater. The most challenging part is the sun so bring lots of sunblock and water. I suggest that you start the trek at early in the morning, say 6 or 7am or in the afternoon at 3pm. Expect to cross a couple of streams of different forms. This means that you can’t escape having your feet wet. On this regard: a pair of heavy duty hiking shoes is recommended. Or, if you’re sticking with your Mojos or Sandugos, expect some small pebbles to get in your sandals. Just wash them away when you get near a stream.

What you see in the pictures is definitely the same thing that you will get. Hmm, not quite so. When we saw the crater, the lake water was not emerald green. It was chocolate brown! The only reason we can theorize on this is that it was raining during that week and the weather somehow stirred the muddy layer of the lake. At night, we heard some rocks falling from the cliff and later, my friends had mistaken the crater lake to be boiling as if ready for eruption (a really evil thought since Phivolcs predicted a 2391 follow-up to the 1991 disaster). Too bad that I was heavily sleeping that night.

In the crater, you only have a camping space close to the main viewing deck and that’s it. You can put up a maximum of ten tents in the area. It isn’t that big for a big crowd. Then there are two portable toilets similar to the ones made by MMDA but bigger and in green. There’s a shelter near the toilets that looks like a waiting shed. And another shelter being constructed by the “occupants”. I heard that once it’s built, it will be open to the public for rent.

In the lake, you can swim (though Phivolcs is not advising this) and boat. There are some boats for rent docked beside the lake (which can be reached through a cemented stairs from the viewing deck/camping area).

Fresh from a tiring trek back to Capas, you deserve a nice spa/massage at Mt. Pinatubo Spa Town. It is located near the tourism council and the street is crowded with guides and 4x4 drivers waiting for tourists. Just approach any staff from this Korean-owned recreational establishment and be ready for some (decent) offers that you can’t resist.

They’ve got a Thai-Sweddish massage, a volcanic ash spa, mud pool and a buffet. We tried the volcanic ash thing for P500. The area is like a giant “pugon” with volcanic ash all over it (you’ll mistake it for sand). They’ve got “sleeping chambers” where you will be positioned to be covered with ash for good 30 minutes. Don’t feel guilty if you fall asleep. It must be the relaxing music speakered from all over the area. My colleague had noticed that the music resembles a theme song from a Korean telenovela.

If I got it right, the spa town caters for those who only wish to take a bath. I am not sure though how much they charge for that but I like their shower area. Clean and safe. They have lockers where a set of towel and a “uniform” (khaki shorts and gray t-shirt for massage, etc.) awaits.

We were also offered with a buffet that costs P350. That time, the menu includes one whole stuffed chicken plus ginseng and kimchi. We opted to go back to the junction where a big bowl of hot bulalo was waiting to be served at Junction Panciteria.

Nice description of your trip to Pinatubo. Very informative. Would like to just have the sand spa and massage...is this possible or are you required to do the trek up the crater or go to the hot springs? Is an reservation needed or can you just walk in? Thanks for the info.