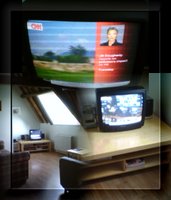 Do you know those film titles which are not totally relevant to the film itself? This blog is somewhat similar to that. Who the hell knows about Lifen City?

From the office, I laid all my cards and risked my self of being soaked in the rain while biking my ass off. Oh God, how I miss my bike named Scorsese. I just left it in the office basement parking during the long weekend. (By the way, it has a Ricardo sticker on it. The bike shop staff even put “Ricardo” in the receipt which eventually made its way to this cut-off date’s expense claim in the office. Maybe the previous owner is a football fan. But hey, is there even a football player named “Ricardo”? Or it could be the “football player” himself, maging sino ka man…).

OK. I admit that I decided to cycle today so that I can stop by at my favorite Surinamese “turo-turo” (there’s only one Surinamese resto that has that concept) only to find out that it’s “Gesloten”. (Actually, the sign says “Closed”, in English, not in Dutch. I am just trying to be cool and convince you that I know a European word other than “como esta”). That Surinamese “turo-turo” is not walkable so I had to bring Scorsese with me. A few minutes ago, I was craving for that grilled looking porkchop and now I have to crave for some spicy Indonesian food at Babby’s. It took me five minutes to adjust my craving. That, of course, is one my talents that is now out in the crack.

It’s my tenth time, I guess, at Babby’s. If the conversation went that way on my first visit, I would not bother going to that resto again. I simply hate it when I meet Asians (mostly Pinoys for a very reasonable reason) and they would always ask me with “What do you do here?/Anong trabaho mo rito?” as Question Number One. If Asian Stranger first asks me with a question other than that, expect the pep talk to be a heartfelt one-on-one interview, digging deeper into the soul, one spirit to another (all right, I am a frustratred talk show host).

One time, in London, I was with my officemates Josh and Hubes and a manang joined us in going to Picadilly Circus. We were seated in the first row of the bus’ second “floor”. Josh and Hubes on the left side, manang and me, on the right. Manang is an “I.T.” (a term I coined with Moncho, another officemate, in Paris while trying to describe those “D.H”-looking fellows. But hold it, I have nothing against domestic helpers. I am even proud of them for the simple reason that we can invade Planet Earth with their help. Calling them “I.T.” is my way of paying them a tribute, as good as laying them with Everlasting.).

The window glass in front of us looked like a giant TV screen. That gave me “that” mushy mood in asking questions. Manang shared to us her struggles including her husband in Nueva Ecija who’s currently “gulay” because of a stroke. Manang declared “Buti nga sa kanya. Ang tamad-tamad kasi.”.

I didn’t recognize it but when we got off, Josh mentioned that I have this gift of gab. My questions were pretty amazing, he said. Well, I trust Josh when talking about things like that. He’s one of the sincerest officemate-friends that I know. Otherwise, he would remove his eyeglasses as a clue that he needs something to do other than talking to you. I didn’t know if I blushed that night. But it must be the bus being so bloody red.

I had dinner at 7pm sharp. Really, it’s 7:00pm in my celfone. Two celfones, to be exact (one is personal, the other, from and for the office). This is important. Don’t skip this part. While eating my “gado-gado” (combo Indonesian food), I was seriously attuned to CNN Today’s two beautiful stories. One is about this soldier in Iraq who keeps a therapuetic pen palship with some kids in a primary school somewhere in New York. The highlight of the feature is having the soldier visit the school during his two-week break in the US. His very first pen pal is a girl. She cried when she met him in person. I think I almost cried. Hahaha. It’s another moving story on how the “force” manages to intertwine people in the most poetic way. The girl said “I still want to know what is his favorite color…”.

By the way, the other story is about the world’s most polluted city.
Posted by Manuel Pangaruy, Jr. at 6:57 AM

Looking for information and found it at this great site... » »