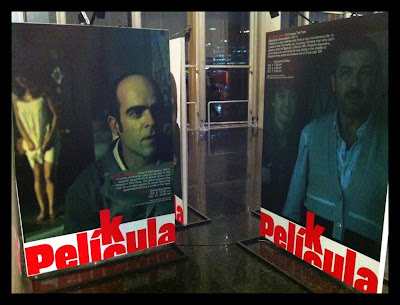 Pelicula (or Spanish Film Festival) at Greenbelt 3 remains my favorite, locally held film festival specific to a certain foreign language. First, it’s ticketed but for a minimal amount of P65. There’s no need to queue and argue with the mall guards who do not really like films. Tickets can be purchased in advance and/or through online via sureseats.com. Second, they raffle off a trip to Spain at the end of the festival, usually during the viewer’s choice screening (this year, the bragging rights went solely to Argentina’s “Un Cuento Chino”). Third, there are staffs from Instituto Cervantes in the area attending to some queries regarding the film entries or in case you have an epiphany to study the language while watching any of the films. And lastly, the selection is just incredible, not so artsy and not so mainstream.

Below is the list of the films that I saw from last year’s Pelicula. I know it was held around four months ago already (October 4 – 14, 2012) but I just want to take note of the films before oblivion beats me. Here’s my share:

Un Cuento Chino (Sebastián Borensztein, 2011) It's the best way to start a film festival that tries to address language barrier and initiate camaraderie. On top of the novelty (an Argentine guy meeting a Chinese guy and attempted to communicate without having to talk), there’s a glimpse of how the government treats this inevitable situation. The plot may not be that fresh but I liked its treatment on quiet scenes, muted colors and emptiness. I giggled when I saw that plate of morcilla and chinchulin. The cow (an Asian farmer’s best bud and a South American’s main source of parilla) in the first scene alone tells about universality and how everything can be connected. I remember seeing its movie posters in Montevideo but I can’t watch it because there’s no English subtitles available.

Grupo 7 (Alberto Rodríguez, 2012) A fast-paced action film about a police unit that is tasked to clean up the city of Seville in time for the World Expo in 1992. Could be taken either as a popcorn flick or yet another film about police brutality. It got me glued from start to finish. I can say that it is my kind of film, the one that borders from being entertaining and at the same time, anchored in something insightful and substantial.

After (Alberto Rodríguez, 2009) For the same director who did “Grupo 7”, this is a display of versatility. It's about three friends in their 40's who had their own share of epiphany after an evening of drugs and booze. In short, it’s a film about the so-called midlife crisis as told in a Rashomon-like style. The intertwining stories may look old and overdone but it still delivered the goods.

Hollywood Talkies (Óscar Pérez and Mia de Ribot, 2011) I have never seen a documentary this weak. It's a reminder that if you don't have enough data, don't do it yet. To make up, it used some old photos of its subjects that are flashed on screen for about 20 to 30 seconds each, combined with a scary mood music and a narration that seemed like a reading from a Googled information. In between are some odd videos of the beach, old buildings and streets. It has no interviews, no details on the period, just random stories from an interesting, bygone era.

Cortos Vascos: Amar (Isabel Herguera), Flock (Asier Altuna), Daisy Cutter (Enrique Garcia and Ruben Salazar), Exhibition 19 (Alaitz Arenzena and Maria Ibarretze), The Great Race (Kote Camacho), Everything’s Alright (Miguel Angel Jimenez), A Crappy Boyfriend (Borja Cobeaga), Mouths of Sand (Angel Aldarondo) and The Award (Leon Simiani) All in all, it’s an interesting mix of short films. Memorable scenes include the meet up of the chirping crowd in “Flock”, the running kid in the animated “Daisy Cutter”, the arguing couple in “The Award” (with this one, I was thinking of the Buencaminos) and the irresistible metaphor in “A Crappy Boyfriend”. But my favorite has to be “The Great Race” which is in B&W. I wasn’t so sure what the statement it is trying to convey (could be the passion for betting) but the unmanned horse race got me.

Dos Hermanos (Daniel Burman, 2010) This is my favorite among the films that I saw from the lot. It’s about siblings Marcos and Susana in their 60’s who have no choice but to reconcile their differences after their mother died. It’s actually a comedy but very restrained. It’s also very accessible in terms of character study. The personalities in focus are very interesting. One is very loud and outspoken while the other is exact opposite. The use of Argentina and Uruguay as neighboring countries is a good metaphor for this brother-sister movie; they look close but not always entirely.

5 Metros Cuadrados (Max Lemcke, 2011) This is very similar to what our very own Joel Lamangan could do if given a chance. It’s a take on oppression as seen from the point-of-view of a middleclass couple who spent what they have and bought a home from a problematic construction company. The last few sequences are very much similar to Brocka’s “Bayan Ko: Kapit sa Patalim” only more melodramatic and less subtle. It could be a statement on Spain’s recent economic woes and in that aspect, the film is very relevant.

Madrid, 1987 (David Trueba, 2011) Among the bunch of entries, this one is probably the most polarizing. For around 104 minutes, the movie injects claustrophobia through a conversation between a young and beautiful student and an old journalist both trapped in a bathroom somewhere in Madrid. It’s actually an interesting proposition considering the age gap and what could have been the opposing views, no matter how twisted, of the two characters. Along the way, I got bored and lost track of the essence of it. Maybe there are some points there that could only be truly appreciated if I were a local.


La Chispa de la Vida (Álex de la Iglesia, 2011) This dark comedy is very easy to like. Salma Hayek stars as the wife of Roberto who once became famous for an ad slogan for Coke. While visiting a hotel with sentimental value, which is now turned into a city museum, Roberto falls in scaffolding and finds his head trapped in an iron bar. The accident turns into frenzy as media covers the whole incident and network bosses haggle for exclusivity. I actually enjoyed the premise. It’s just that everything is so obvious and most of the actors, Salma Hayek included, took it in a very loud approach.


Pa Negre (Agustí Villaronga, 2010) This coming of age tale in a post-war era in a Catalan countryside tells the story of Andreu (impressively acted by Francesc Colomer) as he struggles to unmask the real killers of a murder of a father and a son whose bodies he himself has discovered. I saw somewhere that this film is an adaptation of a powerful novel and this is pretty much evident most of the time. The last scene with Andreu in an attempt to sum up what he has become as a person after the war has a dark, lingering effect.

80 Egunean (José María Goenaga and Jon Garaño, 2010) The look and feel of this film about two 70-year old women who had an affair, despite of one of them having a husband, in span of 80 days (thus the title) is very similar to the texture of our roster of indie films. I can imagine the likes of Jeffrey Jeturian doing a similar form of aesthetics. It’s essentially a small film with very minimal characters but the emotions are quite powerfully restrained. Thanks to its actors. I also find it insightful. Given the contemporary backdrop, the take on homosexuality is still traditionally verbalized without the conceit of berating it or worse, bragging about it.

18 Comidas (Jorge Coira, 2010) I capped the festival with a feel-good indie film about food. It is set in a city known for good cooking with a series of short stories that displays how a meal serves as a sounding board to some people. There’s this small time actor who waits for her date from breakfast to dinner. There’s a bored housewife who invites her musician ex-boyfriend for lunch. A gay couple’s meal for a visiting brother suddenly turns awry. A young woman tries to end an affair with a married guy over dinner. A sister follows her luck on music after working to a family-owned restaurant for some years already. And then there’s an old couple who does nothing much in life than eat together in a small apartment.
Posted by Manuel Pangaruy, Jr. at 7:08 PM