Got a Snow Patrol Concert Shirt 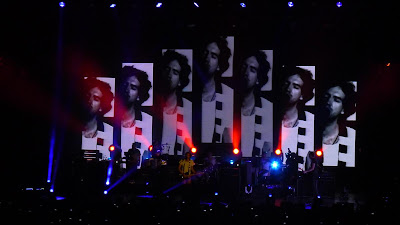 First, let me get this straight. I am not a Snow Patrol fan. It’s more of I just know them. I first listened to them back in 2005 while I was on my second onsite assignment in Belfast. That time, it was the farthest city from Manila that I’ve been to. And it was wintery and sad even with the presence of Pinoy colleagues that eventually became my close friend. We got along with music from the radio, specifically from the car stereo that four or five of us shared on our way to the client’s office just outiside the city. That’s every single work day in a span of three to four months.

I remember Keane. I remember McFly. I remember a duet by Delta Goodrem and Brian McFadden who just turned solo that time and left Westlife for good. Let’s just say that 2005 was the year when I first had the closest encounter with Brit pop. That includes my trivial affiliation with Snow Patrol and the trigger song was probably “Run”.

When I first learned that the band was stopping by in Manila for a one-night concert, I knew it already that I had to see them perform live. Never mind that I am familiar only with a few of their songs that span from 1998 down to 2011. It’s part of the Fallen Empires tour anyway. I just had to familiarize myself with the latest album to avoid being a vegetable for the duration of the concert.

Three days before their concert last August, there was a heavy monsoon rain that paralyzed some of the streets in the metro. Smashing Pumpkins was also scheduled for a concert two days prior to Snow Patrol’s but it was reset the day after just to pacify the mood of those affected by the calamity, not to mention the safety for those who were still willing to brave the rain.

The weather cooperated just in time for the Snow Patrol concert. Though it wasn’t raining during the day, it was gloomy. I reached the venue by MRT an hour early. I got in and bumped into The Richard Bolisay again with two girl friends while I was about to get some food. I then explored the souvenir booth. That time, I only had P600 in my wallet and I wanted to buy the shirt badly for P800 each. They didn’t have options for credit card transactions and worse, for the record, there’s no ATM inside the venue. When I was about to get out to withdraw money, I was warned that I can no longer come in. Obviously, I don’t frequent the coliseum as I am not familiar with the said inconvenience. I tried calling Chard but he can’t be reached, not to mention that the Globe signal was very weak. Where was I again? Oh, Smart – Araneta Coliseum.

Out of nowhere, I saw an ex-officemate with a very prominent last name. She was alone that time and we were on the same seat section. I had no choice but to share my dilemma. Without blinking, I asked if I could borrow money from her and she obliged without questions. We then exchanged numbers, primarily to keep in touch on how I could pay her up. She joined me back to the booth and even suggested the shirt design to choose. Since it was the last piece for my size, I grabbed it.

Some of the songs performed that night, as expected, were from the Fallen Empires album. It had been a favorite playlist for a few days already so I wasn’t that lost. A remix of “Berlin” opened the show and I recall them performing “In the End”, “This Isn’t Everything You Are”, “New York” and “Called Out in the Dark” among others. They also did some old hits like “Run” and “Chasing Cars” which became more popular when it was used in the love scene in the Star Cinema film “The Mistress”. My favorite track from the album is the upbeat “The Symphony” but it wasn’t included in the setlist that night.

Crowd was consistently ecstatic. I was surprised actually that they can fill the coliseum given the weather condition. Lead vocalist Gary Lightbody made it a point to interact with the concertgoers as if the band has been to the country before. He even sympathized with those affected by the flood and dedicated a sincere rendition of “Life-ning”. The song, by the way, enumerates things that matter in life like “a hand upon my forehead, the joke and the laugh, walking up in your arms, a place to call my own”.

The rain finally poured right after the concert. It was an ordeal getting a cab from the nearest building that looks like a call center hub. I decided to just go to EDSA with a tiny umbrella at hand and joined the crowd in waiting for a bus on the southbound lane. A taxi came after a few minutes and I hailed it. Never mind that my shoes were all damp as long as the newly bought concert shirt was dry as a bone.

The rest of the pics here and videos here and here.
Posted by Manuel Pangaruy, Jr. at 11:27 AM