In less than two weeks before we finally left Montevideo, we got news that Pluna, Uruguay’s national airline that would bring us to Sao Paulo, filed for bankruptcy. And unlike those companies facing the same dilemma, Pluna stopped the operations right there and then. That was tough for us since we didn’t have much time and we were not given any word on how to at least refund the ticket. For close to a week, we were calling and waiting for any booked flight. The challenge then was to still catch the succeeding Emirates flights from Sao Paulo to Dubai then Dubai to Manila. Otherwise, it would be more taxing if we rebook the whole thing. And just days before the original schedule, we secured a trip through GOL (a Brazilian airline) that would let us leave Montevideo as early as 5am and will have a short stop-over at Porto Alegre in Brazil before landing at Sao Paulo. I have no clue why mishaps like this always happen on my way to Cinemalaya. Last year at exactly the same time, a volcano in Chile erupted and its ashfall stopped most of the outgoing flights from Montevideo.

Anyway, for the new trip, we were required to have a long layover (around 12 hours) in Sao Paulo. I took the opportunity to explore the city since we were prompted to book a hotel where we could stay in less than a day and without even spending the night. Mike left a day early so I had no choice but to do any available city tour on my own. With the 4-hour trip we did in Rio de Janeiro in mind, I checked Tripadvisor for the most popular (and therefore the most trusted) guided tour in Sao Paulo. There I found this company called Around Sao Paulo (www.aroundsp.com) and I started emailing for reservation three days prior to the trip. Luiz Quevado (Phone: +(5511) 99139940 / 93912302, Mobile: (5511) 7880-4186, Email: reservations@aroundsp.com) replied back and we settled for the hotel pick-up at 2pm.

On the day of the trip, I was early at Carrasco International Airport and I was the first in the queue. By then, Mike was already done with his Brazilian leg and he mentioned that the lines in Porto Alegre were long and the time to catch the next flight was very challenging. He had to pick up the luggage and have it checked in again on the way to Sao Paulo. The GOL staff who attended to me mentioned that the Porto Alegre flight was cancelled due to a “methological error”, whatever that is. She said that I will need to stay in the said Brazilian city and will leave for Sao Paulo at 4pm. Before I even reacted, she corrected it by saying that I will be flying out instead through TAM that will leave Montevideo at 6am and will go straight to Sao Paulo (skipping Porto Alegre). I was so sleepy then and at first, I didn’t get the idea that it was a more convenient flight.

I arrived in Sao Paulo as early as past 10am. It was a nice flight and it’s a treat to experience sunrise from the plane window. Immigration and taxi queues went smoothly and off I went to the city center through a SLEX kind of airport road. It is too long for me for an airport-to-city trip and I was informed already that the traffic will get worse in the evening. It was rainy at Guarulhos International Airport (GRU) that time and gloomy all throughout when I finally reached the heart of the city.

Golden Tulip Park Plaza is located close to Paulista Avenue which is their equivalent of Ayala Avenue in Makati. I was too early for check-in and no room was available that time. Since the tour will start later at 2pm, got no choice but to leave my luggage there and went to visit Museu de Arte de São Paulo or simply MASP. Based on the map, it’s just seven blocks away from the hotel but when I realized that it’s uphill heading to Paulista Avenue, I hailed the very first taxi that passed by. The driver didn’t accept the one real bill which I got from the money changer in Montevideo. He told me that it’s worthless. I didn’t bother figuring out if he was just outwitting me or what. At least I have Brazilian money for souvenir.

MASP opened after I lined up for 15 minutes. Entrance was free that time. I bothered asking why but everybody seemed to ignore my English and I didn’t know any helpful Portuguese word. The iconic museum stands on four bright red pillars with an open space at the ground. From afar, it could resemble a giant table or a cabinet. It houses a wide range of pedigreed artwork from Claude Monet and Rembrandt to local artists. It’s just one floor of packed art stuff from sculpture to doodles and it didn’t take a while for me to finish browsing all the items. I just walked back to the hotel, explored Paulista Avenue some more and had lunch at one of the carinderias along the way. Let’s just say that I survived my very first meal there by pointing to the pictures on the menu. It helped, too, to observe how people pay up.

Clocked at 1pm, I was already having a shower in the hotel room. I made it a point not to adore the bed because I won’t be able to sleep there during the night. At 2pm, I was already at the hotel lobby. Luiz wasn’t around yet so I followed my instincts about a possibility of having two or more Golden Tulip hotels in the city. I was right when I called him. After 30 minutes, he showed up apologetically and said that he will just make up for the lost time. It started to rain the moment we left the hotel aboard his car. 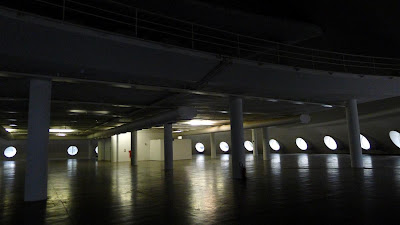 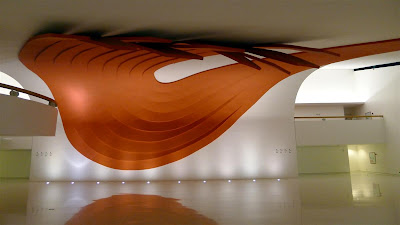 At the lobby of Ibirapuera Auditorium, also by Oscar Niemeyer 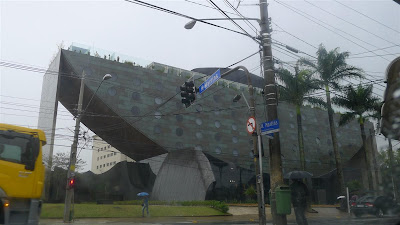 Luiz is very fluent in English and he’s open to customize the tour based on points of interest. I told him that I was fine with anything architecture especially those that paved the way to Sao Paulo’s distinct character. I mentioned, too, that I learned from Morgan Spurlock’s documentary “The Greatest Movie Ever Sold” that there’s a city ban on billboards. He confirmed this and elaborated more as we cruised along Paulista Avenue. He mentioned a media building that has four or five more floors below and another one that is one of the oldest buildings in the city. Then we headed to Ibirapuera Park to get up close with two of Oscar Niemeyer’s iconic buildings, the Oca and and the Ibirapuera Auditorium. The former functions as an exposition place while the latter serves as an intimate venue for concerts and the like. I was informed that one of the said Brazilian architect’s signature designs is the absence of stairs. Levels are creatively connected by platforms or those spiral walkways, very unique and impressive. It was raining hard that time so we stayed for a couple of minutes at the auditorium lobby. The obelisk was seen from the car park but we didn’t get near. 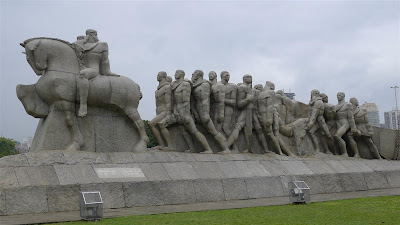 Before we saw the iconic sculpture Monumento às Bandeiras, we made a stop at Hotel Unique that was conceived by another great Brazilian architect named Ruy Ohtake. As suggested by the name, the hotel is quite unique. It looks like a chopped watermelon from afar. Inside, it’s very posh and cozy. On our way to the bar upstairs, we actually saw the architect himself accompanying a group of guests on their way out. Luiz said that I was lucky to see Ohtake in person.The viewing deck of the hotel was not open when we went up because of the weather but I had the chance to take a picture of the skyline from there. Back to Bandeiras which is located in a rotonda, I was so eager to get up close with the sculpture after the rain had subsided. Luiz and I agreed to drop me off on a red light then he will just make one round then pick me up. That part was exciting.

From there, we went to the central part of the city. Luiz parked in one of those huge old-buildings-turned-parking-spaces and we started walking. The rain completely stopped. We visited the Catedral da Sé which looked like 400 years old to me but was only built during the 60’s. It’s massive and the interior is intricate. When we went out of the church, it started to rain again and we didn’t bring any umbrella. Glad that I managed to bring a raincoat with me. From there, we walked a little more to the left and reached the place where the city was born. It’s called Pátio do Colégio where some Jesuits built their mission-school that converted the natives to Catholicism. There are other interesting historical sites in the area and we managed to explore it amidst the rain. We then went back to the parking space and off we strolled around the city some more. 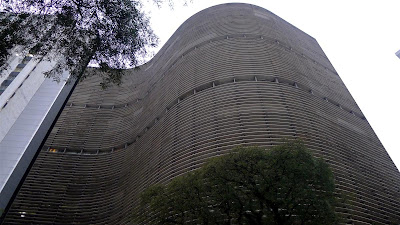 Luiz brought me to the Japantown area called Liberdade and highlighted some establishments made famous by its early Japanese immigrants. We also passed by at Edificio Copan which is another Oscar Niemeyer and if I remember it right, the Italian embassy. As a finale, Luiz made a stop at Estádio Municipal Paulo Machado de Carvalho which is also known as Estádio do Pacaembu. It was one of the venues for 1950 FIFA World Cup and for some major concerts. At 6pm and after a tour that lasted for three hours and a half (Luiz really meant it when he said he’s going to make up for the lost time), we were back at the hotel. I thanked Luiz big time and said that I enjoyed the tour and I promised to blog about the experience.

At 7:30pm, I was already on my way to the airport. The hotel attendants were helpful enough in securing me a cab though I was initially looking for those that accept credit cards which would take 30 minutes more of waiting time. Traffic was pretty bad that time. Using the same route I had in the morning which lasted for 30 to 40 minutes, it took two hours or more to finally reach GRU. It was my first time to see the receiving area of the airport and it didn’t take long for me to check in and reach the lounge close to the designated gate. It was raining when I arrived in the morning and when I left Sao Paulo. It was a tiring day. I just slept half of the 14-hour trip to Dubai with a thankful smile and a promise that I can make it to Cinemalaya 2012.

The rest of the pics here plus some pics on our last week in Montevideo here.
Posted by Manuel Pangaruy, Jr. at 7:56 PM