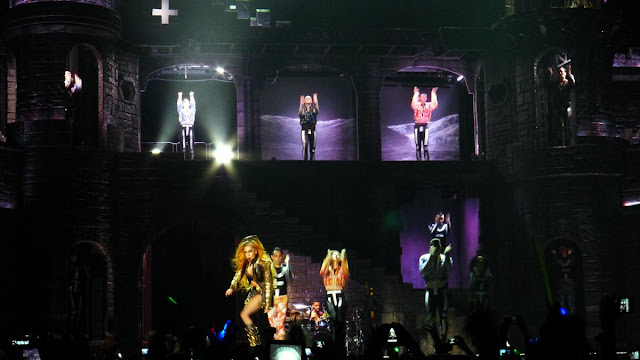 There’s this thing that I always push my luck every time I watch a concert of big names. For the Black Eyed Peas, for instance, I got a ticket for half the price for the section that I wanted. Thanks to the scalper who just showed up right before I reached the ticket booth in SM MOA Concert Grounds. Another example is the recent Paul McCartney concert which was sold out, all 28,000 tickets, in the first hour and there I was getting an extra ticket through a colleague a week before the event. For the Lady Gaga concert held in Manila for two days (May 21 and 22), I had another attempt.

I went to Ayala Center yesterday to scout for a ticket on the same day. Usually, it is either through Ticketworld (at National Book Stores) or the SM Ticketnet. Before rushing my way to either one of them, I made a call and learned that they are not supporting the Lady Gaga concert. I found out that it is the SM Cinema ticketing service (it makes sense since the venue is housed and managed by SM) that’s distributing the tickets and unfortunately, they don’t have any office in Makati. I made my way back to the apartment, left some stuff and headed to SM MOA. At 3pm past, I was already queuing at the cinema booth. There’s tension in there based on the look of the box office staff. While waiting for my turn, I made a call to SM Cinema hotline and asked for the figures. Only the Upper Box (P5k worth) and Lower Box (P11k worth) tickets, 60+ and 700+ (the numbers are a bit weird) respectively, were available. I panicked I bit since I was not planning to spend P11k.

After 15 minutes of waiting, the box office girl announced that the system was hanging and they could no longer issue a ticket (either a new transaction or previously booked online). We were then prompted to get one directly to the ticket booth at SM MOA Arena. Clocked at 4pm, I was already in a queue. At the Marina side of the venue, there are four lanes on the left and another four to the right. Those in the left are allotted for the ticket pick-up but since the connection was so slow, everybody was asked to queue to the left. By that time, there’s a British-sounding guy in front of me at the fourth lane while a maximum of two was either on the third or the first (second lane was empty). It took 15 minutes of more for the British guy to purchase his ticket (as in swipe his credit card and all) and I saw how the system struggled to get through. During my turn, a guy in red came and he was very enthusiastically loud about the four tickets he was getting. When the British guy was waiting for his ticket to be printed (I saw the status “waiting” right in the taskbar on the monitor that is placed facing the customers), I transferred to the third lane which became empty that time. People were starting to flock and the next time I checked, we already formed four lanes with five to ten customers each row. Then the slow connection made its peak and declared “Database error has occurred.”

Coming from an IT field, I just took that as something unexpected and beyond our control. I started bugging my Twitter friends with some sort of blow-by-blow account of the incident just to pacify it. I was sorry for the British guy that he had to experience that kind of ticketing service in Manila. He got through after some minutes and a jolly mom, probably from a nearby province like Bulacan or Cavite as evidenced by the accent, came next to the fourth lane. That time, the slow connection was restored. She was checking out the best spot in the most economical price. She even asked the same question that I asked like which section is free seating and which one is not. The staff in front of me on the other side of the air conditioned room already clicked on the Upper Box link and it was taking a while again to proceed. The waiting game stayed like this for some minutes more and I practiced Zenning up on each step of the way: clicking on the section, clicking on the seat number, clicking on the Continue button and clicking on the payment mode. At this point, the box office girl (account name “mfrias” as seen from the monitor when she was trying to access the system) asked for my mobile number while the rest of the ticket buyers can see it. Upon swiping my credit card (yes, I reached this point after an hour), my name was then flashed on the monitor. Then the connection became very slow again leaving my celfone number and my name stuck on the screen for about 20 minutes. Hello, future textmates!

The jolly mom, by the way, gave up (not sure if it’s the connection or the lack of interest given the available ticket selection). As well as the Korean guy (“I don’t speak English.”) behind her. Mariel Maganda (with one “R” and not her real surname, that monitor was the culprit) replaced the Korean guy. I almost kissed Mariel when she asked the box office girl, “Allowed ba ang infant?” A French couple was inquiring on the right part of the booth (“We don’t speak English very well, please slow down.”) and the guy in red in the first lane was starting to lose his temper. “Miss, kanina pa akong isang oras dito. Nasaan ba ang manager n’yo?” He later on badmouthed the situation to the foreigner guy at the tail of his queue. This foreigner guy was accompanied by a Filipino guy wearing shades who jumped for joy when somebody he probably knows made a way to get their tickets over the phone. Another guy from my lane who looks like the actor who had a cameo in “Crying Ladies” had the best quip: “Hindi puwede rito sina Raymart, Claudine at Tulfo.” The guy in red pretty much summed up all our frustrations. “Siguraduhin n’yo lang na makukuha namin ang ticket bago kumanta si Lady Gaga.” All of these were said and heard while I was staring at the “waiting” status on the taskbar.

By then, the longhaired guy behind me was becoming chummy. He talked about his plans of getting a ticket for the next day. Then he asked “mfrias” if they can just get the connection from his iPhone’s personal hotspot. The system hit a snag at that very moment. Some tech persons were visiting the booth from time to time and the guy in red didn’t waste a minute to throw a towel on them. The purgatory lasted for a few minutes more. Some box office girls, “mfrias” included, left their spot for a second to try to print the tickets from their “office upstairs”. When the system got resurrected, I was asked to choose a seat again to my dismay. I wasn’t losing a lot since the next seat available was just behind the original seat but I hated the idea that we had to do it all over again. We finally succeeded after two failed attempts (“Seat is no longer available.”) and clocked the whole ticket buying experience at 1 hour and 54 minutes. I deserved a restaurant for dinner, with no queue, after that incident.

After having a hearty dinner of tocilog and sampelot from Mangan (it’s worth repeating, I deserved that), off I went back to the venue. The blue section is on the other side of the arena, with the giant globe on my back. It was starting to rain that time and the ushers were prompting the crowd to follow the queue that crossed the street, passed the parking lot and crossed the street back to the entrance. SM MOA Arena’s interior is simpler than I expected (a video here, taken while a DJ was doing the front act), very basic (maybe because it’s not really done yet). The Upper Box section can be reached by escalator or elevator up to the fourth floor. I had a side trip to the merchandise booth (where I chanced upon young actress Chyna Hortaleza who was distractingly ambush interviewed by Showbiz Central) then headed my way to the jungle of sections and seats. When I reached Blue 406, the usher delivered what could probably be the highlight of the day: due to a system bug, all ticketholders of seats under rows G and H are asked to transfer, only if they want, to the Patron section.

The concert was awesome, by the way. Watch it if you can. It’s one of the best “the works” concerts I’ve seen (alongside with Sarah Brightman’s in Ultra a couple of years ago). Let the pictures here speak for that claim.
Posted by Manuel Pangaruy, Jr. at 2:20 AM