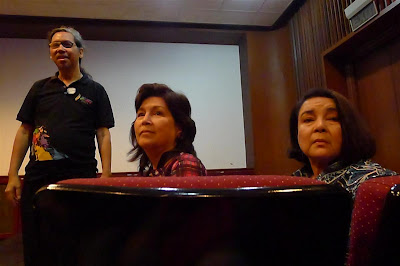 Last Saturday (February 5), I had the chance to be seated right behind two of my mom’s all-time favorite actresses. Miss Boots Anson-Roa (who probably had a vote from my mom when the great actress ran for senatorship) was in the first row, closer to the aisle than Miss Amalia Fuentes (mom calls her the epitome of beauty). The Society of Filipino Archivists for Film (or simply SOFIA) held their screening of Elwood Perez’ bold film “Isang Gabi, Tatlong Babae” (a 90’s movie also has the same title with three different stories starring Cristina Gonzales, Tetchie Agbayani and Ruffa Gutierrez). Too bad Pilar Pilapil didn’t make it but it was jam-packed nevertheless. Those who were standing and occupying the space in the middle had to leave Tanghalang Manuel Conde and settle for a simultaneous screening on a plasma TV just outside the theater. Since it was crowded, the dreaded air conditioner cooperated.

The copy of the film that was exhibited is not in perfect condition. It isn’t finished actually. Our dear archivists had to extend it with a poor television copy from GMA7 (GMA Arts, as the logo points out). Just the same, it doesn’t affect much of my appreciation to Mr. Perez’ campiness (the director was celebrating his birthday on the date of the screening, doubly campy, I would say). At first glance, the title might be a little titillating. It’s a bold film, yes, with lots of fleshing out as per 70’s standards and with some very suggestive scenes of copulation. More than that, it’s a film about women who stumbled, fell and attempted to gain their own salvation. The way the intertwining episodes are arranged, it looks like a retelling of “Oro, Plata, Mata” where the “gold” part belongs to a social climber celebrity while “silver” pertains to the elusive search of comfort from both the mother and son and “death” belongs to the crossroads the woman has to face when choosing between her two lovers who happen to be father and son. Of course, it wouldn’t be an Elwood Perez-Orlando Nadres-Joey Gosiengfiao movie without the lines “Ako’y isang dukha subalit mukha namang one million pesos!” and the “eksena” scenes with Mona Lisa holding a duck on her right shoulder as a fashion accessory or the poor boy petting a dirty-looking rat. Clincher: Mary Walter making sexual advances to Amalia Fuentes.

After the screening, a crew from ABS-CBN interviewed the ladies in the house (Marissa Delgado and Vangie Labalan were also present as well as Orestes Ojeda). Miss Fuentes remains sensible as ever with her opinion about the industry then and now. She mentioned that there is a very thin line nowadays for the actors/actresses appearing on TV or in movies. Food was served in the lobby and people found time to take pictures and just mingle. At one time, Miss Fuentes even screamed “Hindi na ako sanay sa ganitong atensyon!” which put a smile on everyone’s face. That was the most well attended SOFIA event I’ve been to so far (also the most surprising to have finally met the Nepaleses from LA) and I am looking forward to next month’s screening (Mario O’Hara’s “Bagong Hari”).