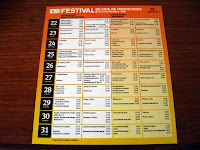 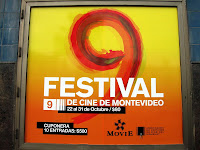 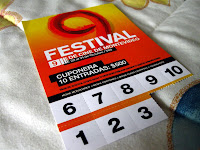 The 9th Montevideo Film Festival held from October 22 to 31 in four cinemas (one of it is in Punta Carretas Shopping which is just near our apartment while the other is in Montevideo Shopping, a bigger one, which is reachable by cab) just concluded quietly. It’s not really a big event (at least for a non-Spanish speaker like me). I didn’t even see filmmakers hanging around the lobby before and after each screening but I heard about affording an awarding ceremony. For me, it’s just a screening of films (like renting a bunch of videos and have it projected on a big screen) if you know what I mean.

Though limited to malls and downtown cinemas, the set-up is similar to Belfast Film Fest where a lot of venues are used like mall cinema, university film center, performance stage and even a yacht (where they screened “Yellow Submarine” roughly five or six years ago). For sure, it’s bigger than Brussels Film Fest where only two cinemas are used for the whole duration but to be fair, the Belgian event is always well attended by Filipinos.

Film selection varies from Zhang Yimou (“A Simple Noodle Story”), Alain Resnais (“Wild Grass”) and even Jean-Pierre Jeunet (“Micmacs”). There are also films that I am not sure why it’s in there, be it because it’s so ten years ago or otherwise, but I cannot complain. The list of films below is not much. For a festival that is organized mainly for the locals, non-English films are always subtitled in Spanish.

Anyway, the rundown and some comments:

Ben Affleck’s “The Town” (2010) Don’t ask me why a recent mainstream movie from Hollywood is there but I enjoyed it. The film is still showing after the festival so I saved at least 50 bucks. Nothing grand about the movie aside from humanizing bank robbers but it is reassuring to know that Ben Affleck can direct. Hopefully Jeremy Renner could hit an Oscar for best supporting role.

Scott Hicks’ “The Boys Are Back” (2009) The film is based on the memoir of Australian sportswriter Simon Carr about the death of his wife and the coping he needs to endure along with his two sons (one of it is from his first wife that he hasn’t met for a long time). I can say that it’s a good family drama. I am not sure if I have seen a melodrama before driven by three male characters but this one’s very effective. Mainstream, yes, but it’s really well made. It’s good to finally see a Scott Hicks movie again done in his home base.

Steve Buscemi’s “The Interview” (2007) Reminiscent of films that tell a story over a night with minimal characters like Emman dela Cruz’ “Sarong Banggi”, Francis Veber’s “The Dinner Game” and Joven Tan’s “Magdamag”. Stagey it may look but I enjoyed the outwitting part between a sports editor and a soap opera star. This is not a good barometer to check whether Steve Buscemi could direct or not but being engaged to two opposing characters is something.

Brian de Palma’s “Redacted” (2007) I don’t think I have seen all Brian de Palma films but for sure, those that I have watched, this film is one of the weakest on the list. It’s an anti-war movie set against the backdrop of the US troops stationed in post-911 Iraq. I think the intention is there. It’s just that use of real time and the gimmickry over video cameras to achieve the authenticity of the ravages of war do not work.

Stephen Low’s “Ultimate Wave Tahiti 3D” (2010) This one totally made me forget that I was in the middle of a film festival. Could be mistaken as a tourism ad-campaign promoting the beautiful islands of Tahiti but I don’t mind. It’s good to have an ice breaker from time to time, a jaw-dropping one to be exact. Not as structured as expected for a travel documentary but the animation used is awesome and the 3D images are just mesmerizing. It gets boring at some point but just like a day at the beach front on a clear sky, relaxing is the sole option.

Rachid Bouchareb’s “London River” (2009) It’s my sixth film for the festival and this is the first one that brought me back to my senses. This Berlin Film Festival-winning film talks about two parents who lost their children from the London bombing in 2005. Coming from different social and religious backgrounds, the two started a bit off and later on surrendered to the comforting notion that they’ve got nothing else to turn to in time of loss. The film tries to make a connection between the tragedies like a terrorist attack and the bond that happens between two individuals of opposing assents. The great Brenda Blethyn provides some lachrymal histrionics complemented by the subtle, almost quiet, acting advances from Sotigui Kouyate.

Anton Corbijn’s “The American” (2010) George Clooney has been doing excellent films lately. What’s so good about it is that his recent films do not have to be too artsy or too mainstream, just something in the middle. This film is packaged as an action/suspense where the Mr. Clooney plays an assassin who is hibernating in Castel del Monte in Italy after a mission in Sweden failed. Compared to other Hollywood-produced films, pacing is not in a hurry. It maturely captures the emptiness of the gunman’s life while still keeping its focus on the action/suspense genre. I can’t divulge much of the ending but I like the unexpected poetry that comes with the execution.

Ethan Maniquis and Robert Rodriguez’ “Machete” (2010) Violent and campy. What else can I say about this movie? Sure it’s fun. The orchestrated foolishness works for me and so is the line “We did not cross the border, the border crossed us!” I guess a capsule review is not worth it. Just go and watch it.
Posted by Manuel Pangaruy, Jr. at 9:42 PM