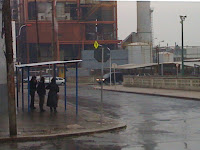 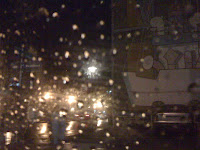 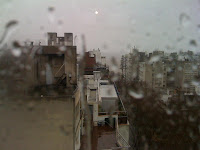 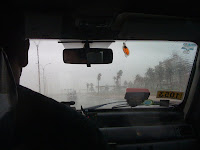 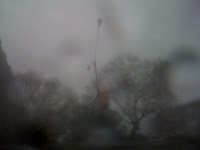 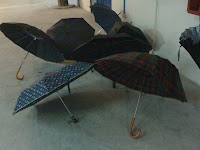 Wednesday morning. While having breakfast with Mike at Salon Panoramico (still at Marti Apartment Hotel), I noticed that the overlooking streets and rooftops were all wet. A rain must have come during the night. I was actually ecstatic about having to experience it for the first time in Uruguay (which always prompts me to hum that song “Rain in Spain” from a musical). Not until another colleague named Nestor from Argentina (or Brazil, I don’t remember), occupying another table beside us, mentioned about this thing called Temporal de Santa Rosa.

From what I have gathered, the phenomenon happens only once a year. It’s a typhoon similar to typhoons in the Philippines, complete with gusty wind and a little rain shower. It normally lasts up to five days, coinciding with the feast day of Santa Rosa de Lima on August 30 (who died, apparently on August 24).

Santa Rosa, by the way, has her own story to tell. She is Isabel Flores de Oliva (1586 – 1617) in real life and, as mentioned, she’s from Lima, Peru. Legend has it that in 1615, she leads a prayer from a church right before the arrival of pirate ships of Dutchmen ready to invade Lima. Without any warning, a storm prevented the ships from approaching the land and the city was saved.

It hits not only Uruguay but the whole South American region. The nearby countries call it “Tormenta de Santa Rosa” which, by the tone of it, sounds deadlier. “Temporal” is somewhat close to “temporary” but according to Nestor, the context there is not merely about time but more on the “just visiting” part. It washes away something and gets ready the land (and the people) from winter to spring.

Catching the season shift and having it stamped during a weeklong phenomenon is new to me. I thought at first that it was going to be a nice experience. Besides, it’s the first day of my favorite month and we had a scheduled apartment viewing in the afternoon. Morning came almost unnoticed but getting lunch around the corner and braving the wind was a struggle. Umbrellas must be strong and a warm scarf would be very handy. Afternoon went unscathed. Almost. Until we went to the long process of calling a cab (through 141) and heading to the other side of Montevideo.

Natalia, the one in charge of our accommodation and other needs of onsite employees, was waiting for us when Mike and I reached the apartment along 26 de Marzo. Alighting from the cab reminded us not to underestimate Santa Rosa. No exaggeration but the wind could probably carry an anorexic. It was cold (roughly five degrees) and the challenge of reaching the apartment lobby from the taxi was slightly overwhelming. Natalia asked to driver to wait for us while we view the unit. An agent, a granny who’s probably on her 70’s, welcomed us in Spanish. I don’t remember much of the details aside from the area being so big but I won’t forget the whistle caused by the wind when we checked the verandah. Then we hopped into another apartment, a posh one, still with Natalia, Mike and the agent all in the same cab, wet, slippery and windy. Verdict: never find an apartment during the typhoon.

Thursday made me realize a lot of things. My umbrella, which has been inside my laptop bag for a couple of years now, just passed out like a tiny sparrow. The casualty happened during lunch break and it was heartbreaking for me. Come dinner time, I suggested a visit to the mall just to get a new umbrella (we got a fancy one from a girly/granny store) and have Chinese food for comfort. Almost end of the story.

The silver lining there is that Temporal de Santa Rosa is a beautiful typhoon. It’s voracious but unlike in the Philippines, you don’t have to pray your ass off to have your life be spared. It’s beautiful, voracious and safe. It cleanses. It signifies both an ending and a beginning. By now, rain is still there but I have a new umbrella. I’m freer to sing that Justin Bieber - Usher song this time.
Posted by Manuel Pangaruy, Jr. at 1:34 PM