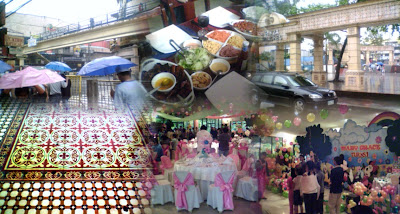 At 10am, I was already rushing to the nearest MRT Station (Guadalupe) to brave that rainy Saturday and be at Trinoma the soonest possible. Reached Travel Club at 20 minutes past 10am. Met Elvira and Marlon there and got a glimpse of my carry-on bag up for repair. We waited for ZP and Lyn until 11am and took Elvira’s red car to Rhea’s place. It was raining. We were in Novaliches, Quezon City.

After eat-and-running a yummy green salad, grilled pork with butter and menudo (a birthday bash for Rhea’s seaman dad who’s across the miles), Marlon sent me to the FX stand. To reach that, we walked through a series of urban jungle, took a tricycle, had a snapshot of the city hall and the old Manila-inspired flooring and braved the rain again. Back to Trinoma at 2pm past, then MRT to Ayala.

At 3pm, I was still panic shopping for Mary Grace, my inaanak (Rico and Vivian’s first child), at SM Makati. The children’s party, by the way, was scheduled at 3pm. Thirty minutes after, cab hunting followed. I got one in front of Glorietta 1 then asked manong to bring me to Urdaneta Village Clubhouse. It was still raining and the party was already starting. There was a clown entertaining the kids and I greeted Rico and Vivian then looked for my inaanak who’s very cute and cuddly at age 1. I just realized that I was just in time for food. Some players wearing Chelsea jersey occupied the football field nearby. It was still raining. I enjoyed the event, from candle blowing down to the party host’s attempt at ventriloquism.

At 6pm, I was lucky to get a cab inside the village. Since “Tuesdays with Morrie” with Vianney, Iam and Ge was cancelled, I decided to go directly to CCP for TP’s “Kudeta”. The play topbilled the great Mario O’Hara plus the rest of TP resident actors. I had a blast, dark comedy is indeed always a pleaser. Cab hunting again at 10pm. It was raining harder and it took me roughly 20 minutes to catch a ride.

Greenbelt 3 at 10:45pm. I was about to LFS “I am Legend” but I got a text from JR that Saguijo was waiting for me. I was at Music One then, browsing through some CDs with (surprise, surprise!) Ely Buendia beside me. Off I went to Saguijo, had one bottle of SMB Pale Pilsen, tried my luck to get in (Pedicab was performing or was it Cambio?) but failed, hurriedly caught a cab which happened to be passing by in that not-so-busy street and went home.

I wonder how my snore sounded that night.
Posted by Manuel Pangaruy, Jr. at 8:16 AM